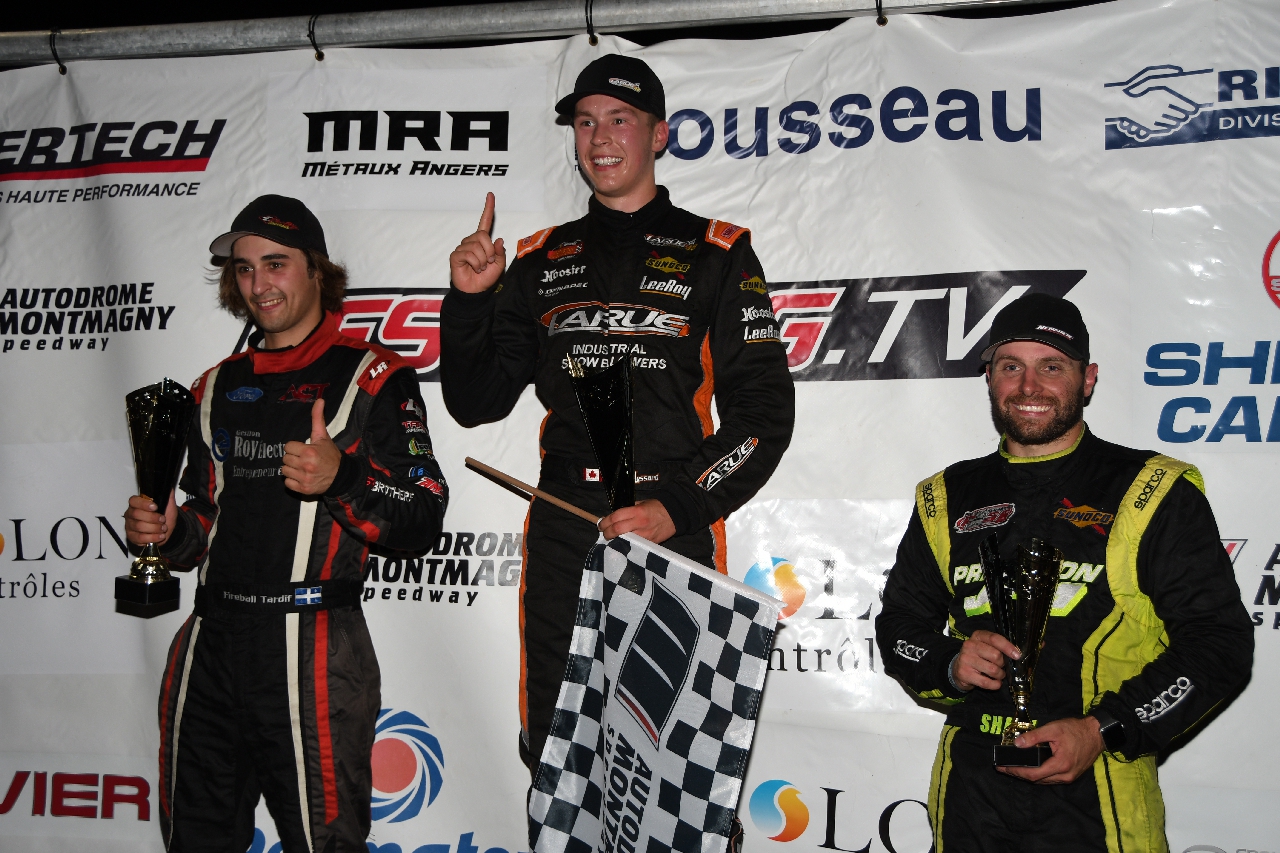 Montmagny, QC — For the first time since 1999, the American-Canadian Tour returned to Autodrome Montmagny and 23-years later once again brought a field of thirty cars to the Quebec three-eighths mile. Once an annual stop on the former Serie-ACT Quebec series, Autodrome Montmagny is a huge supporter of the ACT Late Model program and has also played host to the Pro All Stars Series and Quebec Sportsman Series as a racing hub in Quebec. A beautiful Saturday afternoon gave Quebec and world-wide racefans on Racing America some of the most exciting thrills of the season so far with the CAN-AM 200 going to another first-time American-Canadian Tour winner of 2022.

Three 12-lap qualifying races set the field with top rookie Alexendre Tardif and former Serie-ACT champions Jean-Francois Dery and Dany Trepanier taking down the heat race wins. Following introductions for the 30-car field, a moment of silence was held for Claude Aubin. The former Catamount Stadium champion, promoter of Autodrome St-Eustache and longtime supporter of the former NASCAR North Tour passed away two weeks ago but his international mark on stock car racing will not be forgotten.

After earning the pole position, Maxime Gauvreau sped off with the lead from the start with Raphael Lessard, Tardif, Trepanier, D.J. Shaw and Patrick Laperle invading the top-ten in the early goings. As they clicked off laps, Gauvreau and Lessard grew their lead and began to hit heavy lap traffic, often three-wide as Lessard attempted to gain on Gauvreau.

The first caution flag would wave on lap 50 for the spinning 14QC of Max Taillefer with New Hampshire’s Cody LeBlanc earning the first Lucky Dog of the evening. On the restart Gauvreau once again pulled away as Jonathan Bouvrette stuffed his #41 Duroking Ford Mustang between Lessard and Tardif to make it a three-wide fight for second as Shaw and Laperle looked on from fifth and sixth positions.

The caution flag returned on lap 59 as full-season ACT point hunter Remi Perreault stopped just at the top of turn three with a dead car, ending his day. Perreault’s teammate, and the Iron Man of ACT Competition, Claude Leclerc would earn the second Lucky Dog as Gauvreau and Tardif prepared for the restart. Gauvreau would once again slam the accelerator and pull away with the lead as Tardif, Lessard and Trepanier were tight behind. The first big wreck of the night happened in turn two on lap 64 as Yvon Bedard, William Larue and Louis Phillippe Lauzier got all crossed up to bring out the third caution.

Tardif and Gauvreau resumed their battle on the restart, door handle to door handle until on lap 66 Gauvreau’s #17QC got loose underneath Tardif entering turn one, pushing both up the track and leaving the door open for Lessard to steal the lead away. Lessard would extend his lead until lap 87 would see Jean-Francois Dery slap the backstretch wall and blow his right front tire. Being within the window, the caution also doubled as the fuel stop for the extra distance event as all cars stopped on the front stretch and took on some Sunoco Race Fuel.

Under the resumed green, Lessard powered up his #48QC Larue Ford Mustang and quickly dispatched Gauvreau, Shaw and the rest of the field. The real race on track was for second-place as Shaw and Gauvreau fought hard inside and outside of each other with Mathieu Kingsbury and Jean-Francois Dery getting into the mix as well. The four-car battle was nearly five with Patrick Laperle making his way in until Yvon Bedard’s spin into the turn two grass brought out the caution on lap 135.

Most of the field, including Lessard, Shaw, Gauvreau, Bouvrette and Kingsbury jumped into the pit area to take their two additional right side Hoosier Racing Tires for the extra distance event. After bringing out the earlier caution, Jean-Francois Dery drove up through the field to restart on the pole alongside Patrick Laperle. Dery would take the lead quickly as Laperle fought hard on his outside before the caution flag waved once more for Jean Phillippe Bergeron’s flat left front tire after contact with the inside wall. Dery pulled away with the restart lead once again.

A massive wreck on lap 148 would take teammates Jonathan Bouvrette and Mathieu Kingsbury out of the event after the two slammed into the front stretch wall. That one wreck would set up the rest of the event as a battle between Raphael Lessard and Alexendre Tardif. Both Lessard and Tardif had been in the mix all afternoon, setting up this final throwdown to the checkers. Through three more cautions Lessard and Tardif battled while constantly under pressure from Shaw, Laperle and Dery. The final twenty-four laps were caution free, allowing Raphael Lessard to extend his lead and earn his first ever American-Canadian Tour win followed by rookie point leader Alexendre Tardif and ACT Point Leader D.J. Shaw.