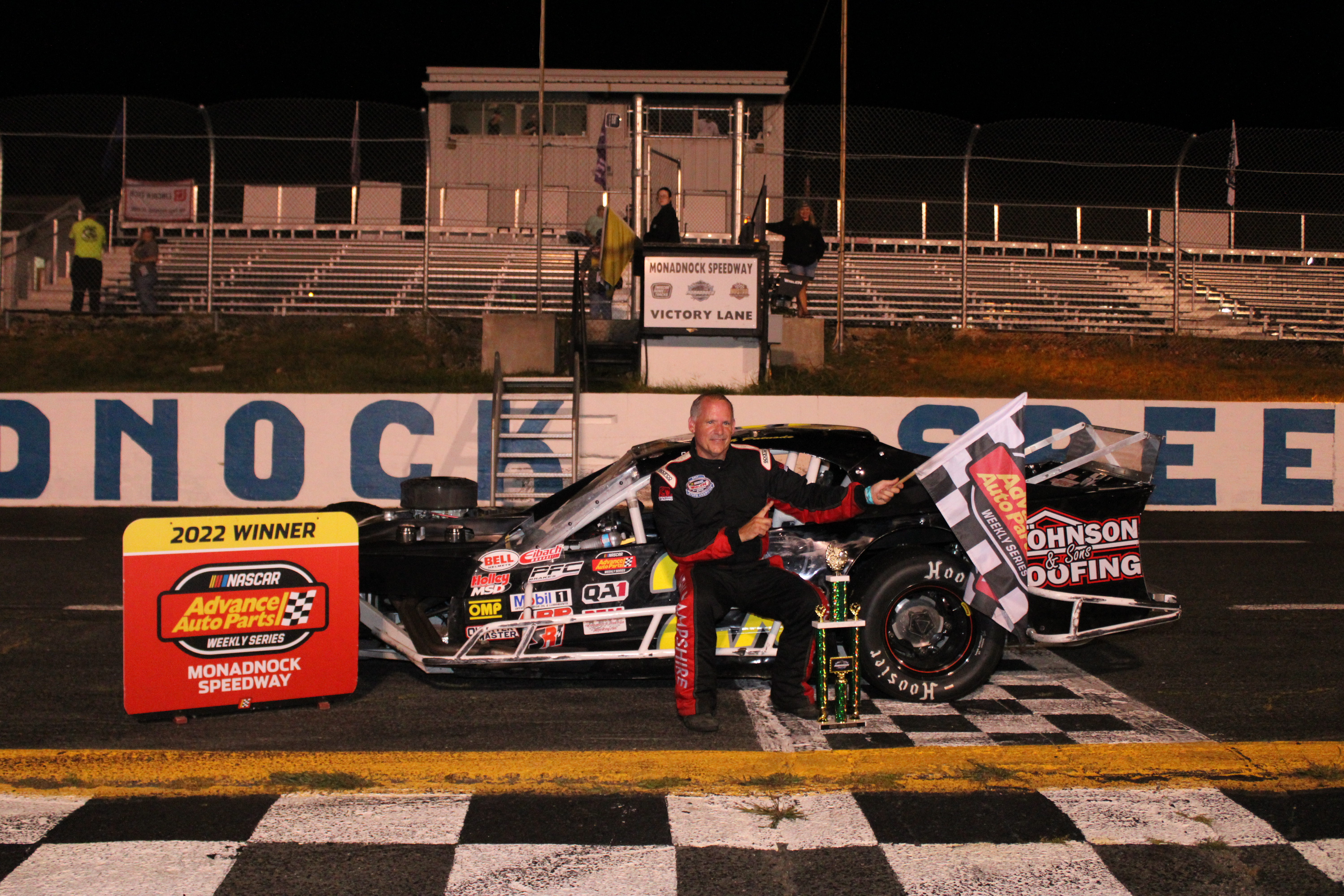 WINCHESTER, N.H. – Todd Patnode had the dominant car Saturday at Monadnock Speedway, blistering the high banks to score his second NHSTRA Modified victory of the summer.

But while the former track champ had the fastest car all night, it was the presence of an errant lapper on lap 25 that left fans and competitors alike with a bevy of what-ifs at the conclusion of Saturday’s 40-lap main event.

Hillary Renaud, though, left no doubt, wiring the night’s Street Stock feature to score – broken arm and all – her first win of the summer. Young Gun Hunter Duquette also won for the first time this year, his victory the first of his career on the high banks.

Mini Stock super star Gordon Farnum again drove away from the field to win his tenth feature of the summer, while LMS ace Cole Littlewood wasn’t too far behind, powering to his seventh 2022 victory. In the Pro Truck Series 55-lapper, teen blaster Devin Deshaies romped to his first win here in three tries, although he did score a NELCAR Legends win earlier this summer too.

Tyler Leary – entering the night eight markers behind Ben Byrne in the NHSTRA Modified points parade – and Nate Wenzel led the 16-car open-wheel field to the green Saturday, with Leary taking the early lead, only to watch Aaron Fellows low-line to the front two laps later. And Byrne wasn’t far behind.

Fellows, gunning for his first win of the summer, took charge on lap three, and by the sixth circuit had Byrne draped all over him. Byrne took control on lap 16, but Fellows refused to give another inch, fighting tooth-and-nail to reclaim the point.

But a lapper ended Byrne’s night – and maybe his championship hopes – when Byrne, Fellows, and third-place Brian Chapin were all scuttled at the top of turn four on lap 25. That moved Todd Patnode, the only Mod pilot under 13 seconds in time trials, and again turning a 12.95 lap in the feature, into the lead and off to victory, repeating his May 1 romp in the Whitcomb 125 event here.

Trevor Bleau was strong in second Saturday, with former track champ Brian Robie getting up for third on lap 30. Leary’s fourth-place run, combined with Byrne’s misfortune, left Leary 14 points ahead with three races left this season.

Renaud ran a flawless line in wiring the Street Stock feature, holding three-time winner Keith Johnson in her shadow to win her first of the year. Points leader Tim Wenzel was strong in third, with Bay State strong man Chris Buffone earning one of his two fourth-place finishes Saturday.

Cole Littlewood, firing from row three, took the lead from Ryan Bell on lap 12 of the Late Model Sportsman feature and drove away en route to his division-high seventh 2022 victory. Bell stayed strong in second, with Justin Littlewood third. Ryan Currier stayed very much in the title chase with Saturday’s fourth- place finish.

Is Gordon Farnum unbeatable? He’s certainly trying to be. Saturday, he took charge on lap four of the Mini Stock feature and zoomed off to win for the tenth time this summer, and 21st time over the last two seasons. Hudson regular Rob Williams was second Saturday, with former winner Cameron Sontag third.

Farnum won his 11th of the season in 2021’s final race. He’ll have two chances to equal that this year.

Devin Deshaies led all but lap one of the Exit Realty Pro Trucks Series 55. The event’s only caution waved on lap one, claiming then-series points leader G-Rod Giordano Jr. – victorious here on June 11 – and shuffling Jim Boyle out of the mix. Connor Souza was second in this one, with Boyle hanging on for third.

For the third event in a row, the Young Guns feature produced a first-ever winner. Saturday, Thorndike, Mass. youngster Hunter Duquette won both his heat and the 15-lap feature in convincing fashion. Multi-race winner Owen Zilinski reeled Duquette in with one lap to go but then ran out of time. Jaffrey young talent Markus O’Neil came home third, just ahead of last week’s winner, Aaliyah Tacy.

Monadnock Speedway returns to action next Saturday, September 3, when the sizzling Pro 4 Modified series invades the high banks to compete in the Paul Roach Memorial Race. They will be joined on Saturday’s race card by the NHSTRA Modifieds, Street Stocks, Late Model Sportsmen, Pure Stocks, Young Guns, and the STAR Antique Racers.