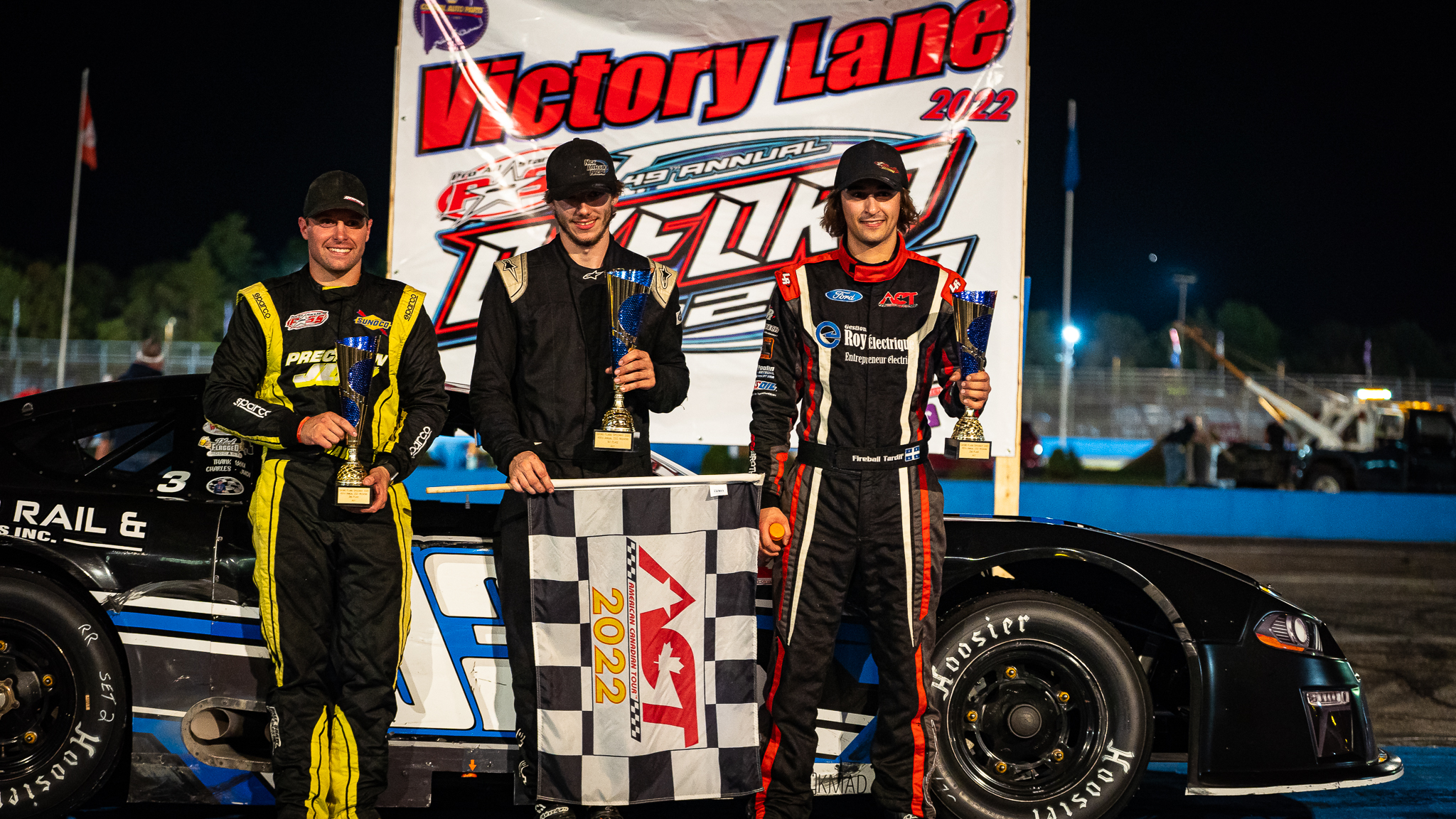 Oxford, ME — The annual American-Canadian Tour 125 at Oxford Plains Speedway headlining the Saturday night before the Oxford 250 program did not disappoint. 38 American-Canadian Tour cars from all six New England states and the Canadian province of Quebec made the trek to the Vacationland home of ACT to take part in one of New England’s crown jewel events. Fireworks on the track split into darkness with a first-time blackout delaying the event in the early goings. In the end, a pair of young-guns once again showed their strength on the tough Central Maine third-mile while a point leader strengthened his title hopes.

Three rounds of qualifying whittled the field of 38 down to 32 starting positions for the Oxford Plains 125. Massachusetts native Derek Gluchacki with Granite Staters Justin Eldridge, Alby Ovitt and Brock Davis all taking down heat race wins in the first round of qualifying Saturday afternoon. Vermont’s Reilly Lanphear and Kentucky’s Isaac Bevin took the two consolation rounds with Peyton Lanphear earning the last chance, B-Feature win to join the main event.

After passing six cars in heat two, Quebec’s Remi Perreault earned the pole position with his strong Plus/Minus handicap beside Vermont’s Derek Ming who took down a +5 in heat one. The Mitchell Brothers Racing Ford Mustang powered up early on the outside of Perreault, with Ming taking the lead by lap two as the field settled in. The first caution would come out on lap 14 for the spinning Matt Anderson machine on the front stretch.

As the field was under caution, single file around the speedway, the lights suddenly went out and encased the entire grounds in darkness. The 32-car-field were stopped quickly and safely while fans in the stands illuminated their surroundings as much as possible with hundreds of smartphone flashlights, and the occasional flame from a Bic lighter. With a car accident down Route 26 taking out a telephone pole, the drivers were assembled on the front stretch and decided to wait out the response by Central Maine Power. By 11:00pm power was restored to the area and drivers returned to their cars scattered around the Oxford third-mile.

Following the restart, top Rookie of the Year prospect Alexendre Tardif had taken the lead by lap 25 with Ming still pulling up strong in second as Derek Gluchacki began to join the fray. Both Gluchacki and Tardif showed consistent speed in the July race, reminding the competition of their prowess in the early goings. Just as the 21QC of Tardif began to hit lap traffic on the back end, the 99NH of White Mountain Motorsports Park regular Ben Belanger spun from mid-pack bringing out the second caution.

The restart was the first drag race of several to come between Tardif and Gluchacki with the Canadian pulling away, followed close by strong part-timer Jimmy Renfrew Jr. Lap 45 would see the spinning Jaden Perry, a Flying Tiger standout at Thunder Road and White Mountain, and lap 51 would find the 15ME of Mike Hopkins spinning following a chain reaction brake check. Each restart proved that both Gluchacki and Tardif were as evenly matched as could be, side-by-side for the top spot with hard racing from both competitors.

Following the first large scale wreck on lap 54, with Matt Anderson parking his 49NH, the ensuing restart found Tom Carey III and Erick Sands joining Gluchacki, Tardif and Ming at the front. The five-way battle for the lead gave way to Gluchacki taking the top spot, leaving Tardif and Carey to battle for second. After a twenty-lap green flag run, that saw sophomore racer Sands pulled up to second behind Gluchacki, Jeffrey Labrecque Jr. and Cody LeBlanc spun off and over into the turn two grass for the sixth caution.

The ‘big one’ would take place on the lap 74 restart with shifting and jolting games gathering up six cars in turn four. The 5MA of Tom Carey III, 04NH of Shawn Swallow, 47NH of Brock Davis and 99NH of Ben Belanger were done for the night with too much damage to repair. Gluchacki would lead the way under the green flag following clean-up as second-place runner Sands quickly faced mechanical issues and pulled his 36NH pit-side for adjustments under green.

Gluchacki and Tardif would continue to lead the way as point leader D.J. Shaw joined in at the front. Two more spins on lap 117 and 123 would stack the field together but no-one could take down Gluchacki. Derek Gluchacki took down his first Oxford Plains Speedway win on the American-Canadian Tour, becoming the first two-time winner in 2022 after eight events. Alexendre Tardif would slide in under D.J. Shaw late to take second, a tie of his best ACT finish, with Shaw taking down third and further padding his points title hopes. After being in contention all night, Jimmy Renfrew Jr. took fourth with Tanner Woodard rounding out the top five in just his second start behind the wheel of an American-Canadian Tour Late Model.

The Stars and Cars of the American-Canadian Tour return home to Barre, Vermont’s Thunder Road International Speedbowl on Sunday, September 4th for the 44th running of the New England Federal Credit Union Labor Day Classic. Along with the $5,000-to-Win, 200 lap American-Canadian Tour Classic, the Lenny’s Shoe & Apparel Flying Tigers, rk Miles Street Stocks and Burnett Scrap Metals Road Warriors complete a full card of championship stock car racing on one of the most iconic dates on the annual calendar.