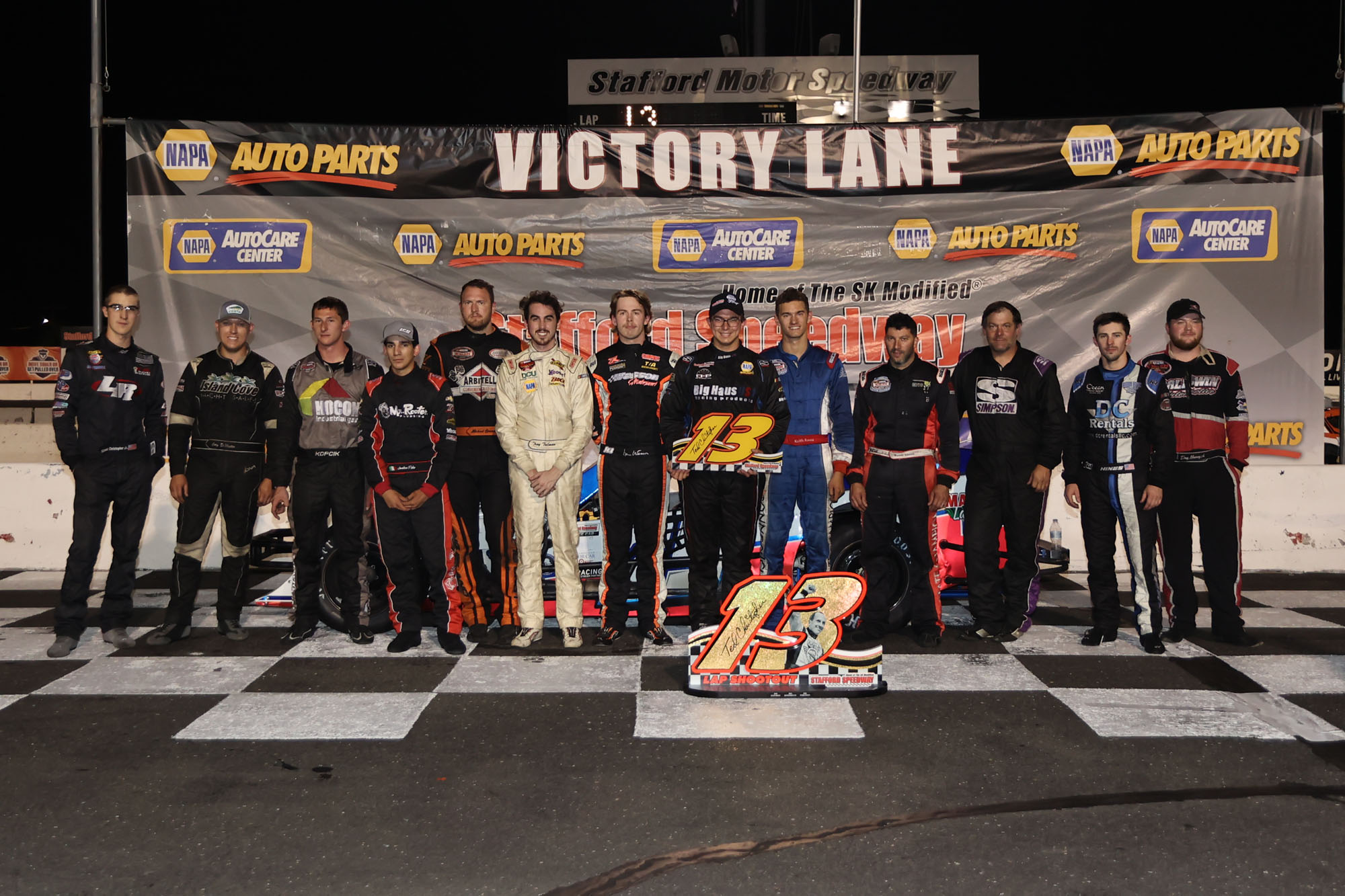 (Stafford Springs, CT)—Stafford Speedway will host the 5th Annual TC 13 Shootout on Friday, September 9 with the support of multiple purse partners.  The 13-lap race is a tribute to Ted Christopher, Stafford’s all-time winningest driver with 109 career SK Modified® wins, 131 overall feature wins, and 9 SK Modified® track championships.  This year’s TC 13 Shoot Out purse currently boasts a purse of over $4,300 thanks to contributions from Justin & Tabitha Manafort, Big Haus USA Racing Products, Ed Bennett and Renee Dupuis, Gaston Racing Enterprises, LifeCare Family Chiropractic with Dr. Sean Noel, NorthEast Race Cars and Speed, New England Racing Fuel Sunoco Brand, Wild Thing Karts, and anonymous donors.  Stafford Speedway is still accepting contributions for the TC 13 Shootout so the purse could be even higher when the cars take to the track on Sept. 9.  Any individual or business interested in supporting the TC 13 Shootout event may contact the track office at 860-684-2783.

In addition to the TC 13 purse, Quinn Christopher, wife of the late Ted Christopher, will award three drivers with a brand new racing seat, courtesy of The Joie of Seating, as part of the Ted Christopher Safety Initiative program.  Two race seats will be awarded to the driver who finishes 13th in the 40-lap SK Modified® feature on Sept. 9 and the race winner of the TC 13 Shoot Out.  The final seat recipient will be determined by a random draw with the TC 13 race winner drawing a name from a list of all drivers who compete in any division on Sept. 9.  If a race seat winning driver does not need a new seat, they can choose to pay that forward to another competitor who would be in need of a new seat.

The TC 13 Shoot Out has seen four different winners in its first four years of existence.  The very first TC 13 Shoot Out in 2018 was won by Glen Reen in a Dan Avery owned car that carried the same black and gold paint scheme that Christopher made famous on his #13 car.  The 2019 TC 13 was won by Keith Rocco, who broke into racing as a crew member for Christopher’s #13 team before setting out on his own career.  Todd Owen scored an impressive double in 2020 by winning both the regularly scheduled 40-lap SK Modified® feature as well as the TC 13 Shoot Out and David Arute is the defending champion of the TC 13 Shoot Out.

The 2022 TC 13 Shootout starting field will once again be set by the top-13 finishers in the regularly scheduled 40-lap SK Modified® feature on Sept. 9.  The race winner will draw a number from 1 to 13 to determine how many drivers will be inverted from the feature finish for the TC 13 starting lineup.  If 13 is drawn, the 13th place finisher will start on the pole of the shootout.

The TC 13 SK Modified® Shootout and 40-lap SK Modified® feature will be paired with Stafford’s Late Models, SK Lights, Limited Late Models, and Street Stocks for a full night of Stafford Weekly Racing on September 9.  With September 9 also serving as First Responder Night, all first responder personnel with proper I.D. can get a general admission ticket for $10.00.  Regular tickets for the TC 13 SK Shootout are priced at $20.00 for adult general admission, $5.00 for children ages 6-14, children ages 5 and under are admitted free of charge when accompanied by an adult, and reserved seating is priced at $25.00 for all ages.  Pit passes are $35.00 with a valid 2022 Stafford Competition License and $40.00 without a Stafford license.  If you are unable to attend the event, tune into the live stream on FloRacing, the official streaming partner of Stafford Speedway.  Tickets for the September 9 will go on sale through the Stafford Speedway website starting Saturday morning, September 3 at 8:00am and tickets will also be available at the admission gates the night of the event.