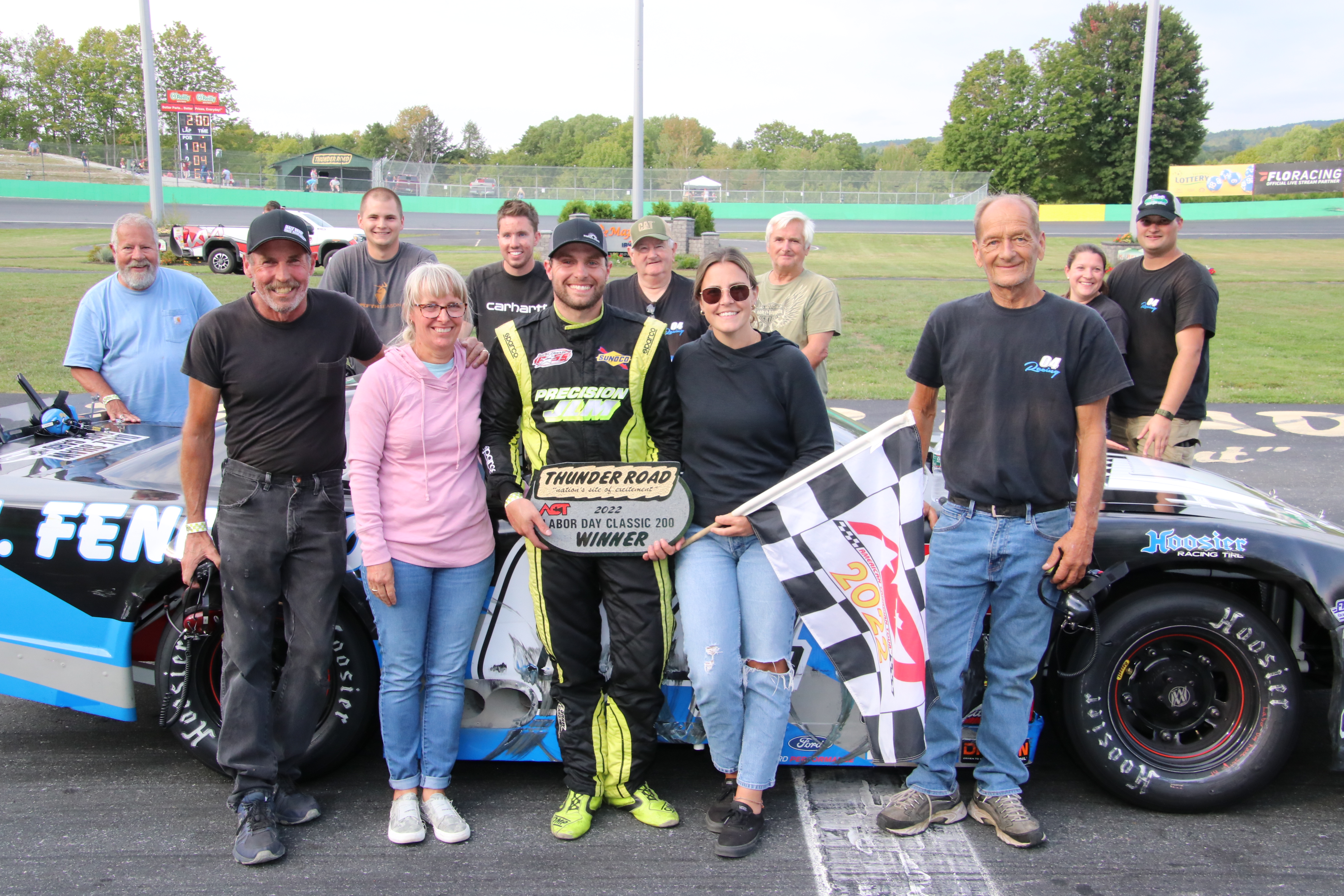 Barre, VT — The 44th New England Federal Credit Union Labor Day Classic at Barre, Vermont’s Thunder Road was a rollercoaster ride for the ages and one that will be talked about for years to come. Twenty-five American-Canadian Tour pilots took to the Thunder Road challenge on the annual end-of-summer event with all expectations turned on their head with just fifteen laps remaining in the epic 200 lap extravaganza. In the end, a former track champion took his second-consecutive podium, a longtime American-Canadian Tour pilot earned his first podium trophy, and a Son joined his Dad on a Barre Granite monument.

Led to green by former Thunder Road Flying Tiger champion Brendan Moodie and Grenier courtesy of their +3 plus/minus handicap earned from their heat races, the field took off with fury from the start. Moodie kept up a convincing lead but yielded to former Labor Day Classic champion Jason Corliss on lap 29. Even after Corliss began to slice through lap traffic on lap 48, the field had been red hot and rolling without hint of a caution flag.

That all changed on lap 65 with the flat right front tire of former American-Canadian Tour rookie of the year Erick Sands. With the pit area open for the first time, several teams took advantage and made the leap down pit road. Among them, Nick Sweet, Jimmy Hebert, Scott Dragon and Bobby Therrien all came in to make adjustments with some taking on fresh Hoosier Tires, hopeful that their odds would improve with 135 laps still to come.

The first restart found Jason Corliss getting the jump on Moodie as they started nose-to-nose at the front of the pack. D.J. Shaw became a factor for the first time as he first moved the A.H. Fence Company Ford Mustang into fourth then into third by lap 75. Just seven laps later, Shaw improved his standings into second and began to hunt down Corliss from nearly half-a-straightaway back. The second caution flag would wave on lap 103 for Marcel Gravel after a flat left front bashed him into the turn two wall.

On the restart, Corliss pulled away from Shaw as an intense battle for third began between Shawn Swallow and Brendan Moodie with Swallow pulling away on the outside. The field would once again slow on lap 120 for the spinning Cody LeBlanc in turn two. Setting up another dog fight between Corliss and Shaw, Corliss again powered up and away with the lead on the outside until the yellow flew for the spinning Jimmy Hebert following contact from Derrick O’Donnell and others as they bunched up in turn four.

With Corliss taking off, Swallow and Marcel Gravel, who drove back through the field following his turn down pit road, drove around Shaw on the restart, stealing away second and third to begin stalking the 66VT up front. Gravel took his chances and drove around Swallow for second on lap 132 in convincing fashion with an ultra-fast piece on the outside groove. The restart following a lap 137 caution for the spinning Kyle Pembroke in turn four set up a drag race between Corliss and Gravel. Gravel stayed with the three-peat champion but Corliss kept up his pace and took the lead once again.

Lapped traffic began to plug up Corliss and Gravel by lap 180, leaving Shaw and Swallow to begin duking it out for third until lap 185 brought utter chaos. A puff of white smoke signaled the end of Gravel’s day on the frontstretch with the 86VT sailing down pit road abruptly while mere seconds later Corliss lost his right front tire on the backstretch. The yellow came out and just as quickly as we lost the leaders, Shaw and Swallow became the new front men.

The final restart set up a battle for the ages with Shaw choosing the low side and Swallow up high on the outside. As Swallow tried to chop down on Shaw under the green, Shaw held his own and the fight was on. Side-by-side the leaders kept it nose-to-nose while O’Donnell, Nick Sweet and Derek Gluchacki waited in the wings, growing ever more impatient with laps winding down. The constant back and forth between Shaw and Swallow at the front had fans on their feet with both still dead even beside each other under the white flag. It remained anyone’s game to the end.

In the final turn it was still Shaw low and Swallow high with O’Donnell and Sweet directly behind, mere inches to spare as the top four drove under a fitted sheet. D.J. Shaw would take the win by 0.120-seconds over Shawn Swallow at the line joining his father, Dale Shaw, as a Labor Day Classic champion. Dale took the win back in 1999 in the NASCAR Busch North Series. Father and Son will now have both their names emboldened on the Labor Day Classic Granite Monument at Thunder Road, an honor D.J. admitted in Victory Lane he never imagined would happen in his career.

*Placed Two Positions Back for Pulling Up to Pit Too Early