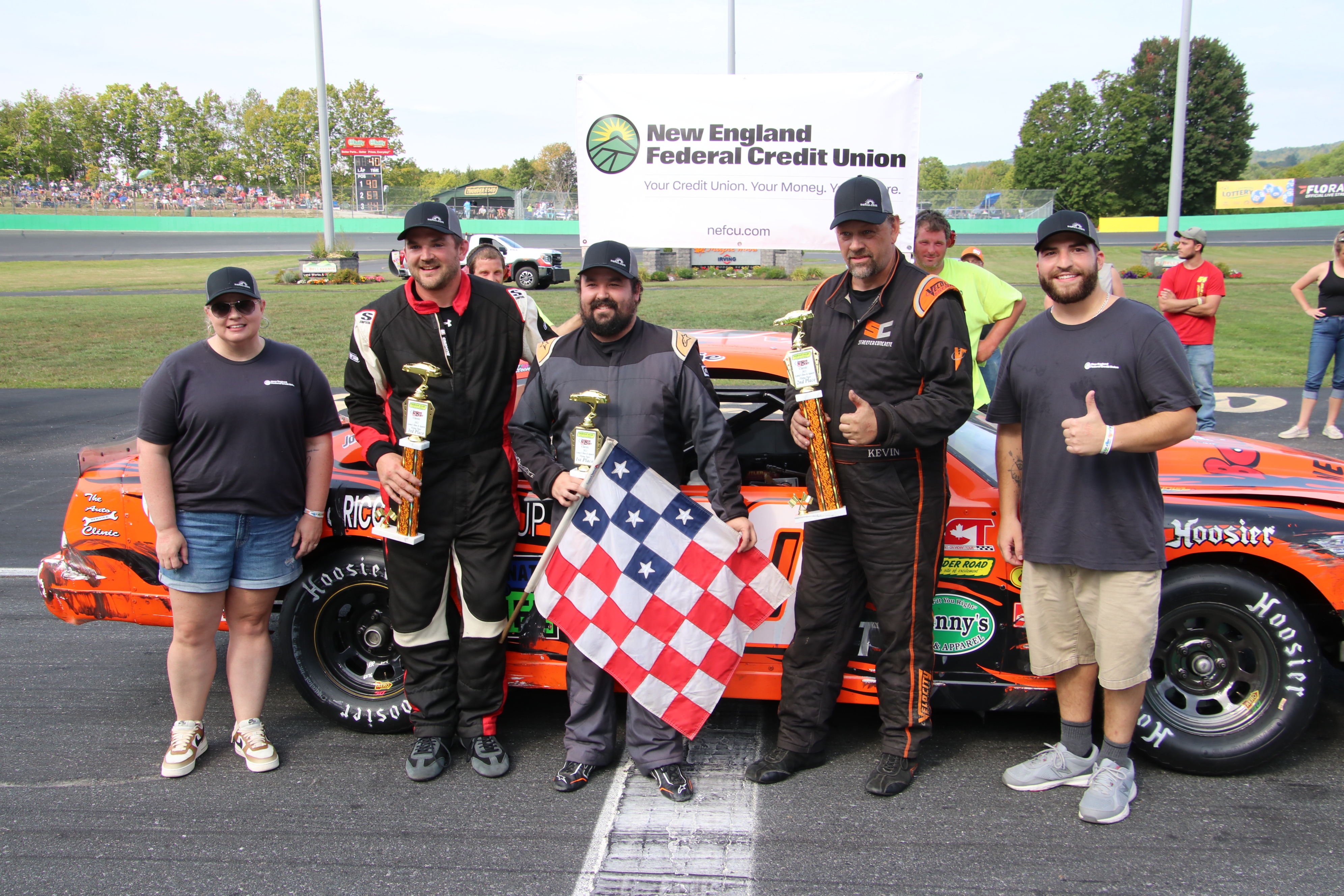 Barre, VT — While parts of Vermont were covered in chilly mist and rain showers, Barre’s Thunder Road was nothing but sunshine and steamy summer heat for Sunday’s 44th New England Federal Credit Union Labor Day Classic. As one of the crown jewel events on the annual Thunder Road calendar, the NEFCU Labor Day Classic brought out the best and brightest in the four divisions present leading to hard charging battles on the iconic holiday weekend event.

The American-Canadian Tour ranks were once again flooded with the Maplewood/Irving Oil Late Model faithful. Although not a point-counting event for the Thunder Road track championship, all the top runners were present including point leader Christopher Pelkey and top contenders Scott Dragon, Kyle Pembroke and Stephen Donahue. The Labor Day Classic itself was brought to the green flag by longtime Thunder Road supporters Chip Grenier and Brendan Moodie followed closely by three-peat Kings of the Road Jason Corliss and Derrick O’Donnell.

Throughout the race top-four weekly drivers Pelkey, Dragon, Pembroke and Donahue were in a constant mid-pack gaggle looking for position while fifth-place point chaser Marcel Gravel had the rollercoaster ride of his life. In the early stages Gravel had fallen back to last on the field before turning up the wick on his Pete’s Equipment Toyota Camry. After driving up to second-place behind Jason Corliss, tragedy struck on lap 184 as something went amiss. Gravel ended his day early, a true contender for the win but nevertheless stuck pit-side to watch the final laps.

Corliss would lose his left-front tire on the same lap, allowing Granite Staters Shawn Swallow and D.J. Shaw to duke it out for the final fifteen laps. After staying side-by-side till the end, Shaw narrowly edged Swallow at the line to etch his name beside his father, Dale Shaw, on the Labor Day Classic Granite Monument. At the end of the day, rookie contender Stephen Martin held the best finish of Thunder Road regulars after earning 7th-place, sophomore racer Cooper Bouchard finished his first 200-lap Late Model event and it all showcased what’s to come this Friday night with the WDEV/Calkins Portable Toilets Championship Night on September 9th.

The Lenny’s Shoe & Apparel Flying Tigers put on a barnburner as the prelude to the American-Canadian Tour Labor Day Classic. As Phil Potvin and Adam Maynard put together a whopping battle at the front, Tyler Austin came to a stop in the low groove of turn four, refusing to move safely into the infield and brought a pileup in turn four and the first caution. Austin was sent home for bringing out the intentional yellow and creating the caution. On the restart Cameron Ouellette battled outside of Potvin as Justin Prescott and Kevin Streeter waited in the wings. Lap 14 would bring the second caution as the right rear hub grenaded on the 3VT of Mike MacAskill sending his axle four feet outside the rear end and spreading gear oil across turn four.

The ensuing restart set up the battle between Ouellette and Prescott that dominated the rest of the 40-lap feature event. By lap 25, Kevin Streeter sneaked under Prescott to take second and set his sights on the bright orange 90VT of Ouellette. With five-to-go, Ouellette had secured the lead, barring any cautions or mechanical breaks, and Streeter began to battle once again with Prescott. Cameron Ouellette took his first win of a difficult season for the team followed by Kevin Streeter and Justin Prescott.

The Crunch Bunch showed that the Dave Moody moniker is still alive and well at The Road as thirty-three rk Miles Street Stocks took to the Barre highbanks on Labor Day weekend. Starting early, Josh Lovely’s #54 Ford Mustang pile drove into the turn one tire wall following contact on the front stretch and three-wide racing in mid-pack. Not only a blow to his program, but also a blow to Lovely’s title hopes against Dean Switser Jr. and Kyler Davis.

Following the restart, a lap 11 dust up between Jesse Laquerre and Patrick Tibbetts sent William Henneguin up and over the right rear tire of Tibbetts and into the infield to bring out the second caution. After leading the race, Chelsea’s Haidyn Pearce restarted alongside Northfield’s James Dopp and the race was on. Dopp pulled away at the line as Pearce back tracked past a ferocious battle between rookies Cam Powers and Zach Audet. The rookie battle for second place was put on hold at lap 17 for the spinning Hennequin and Derek Farnham in turn two, resetting the field once again.

Dopp and Audet took the restart green flag, but their first battle didn’t last long. On the restart a loose Haidyn Pearce in the top ten sent a melee of cars into turn one. As cars flew across the grass and all lanes of traffic, Taylor Hoar got the brunt of it, smashing in the nose of her #48 machine and ending a strong run for the sophomore racer. Under the restart green, Dopp and Audet drag raced across the quarter mile oval with Dopp pulling away back at the start/finish line. Going green until the end, James Dopp earned his second win of the season followed by rookie point leader Zach Audet and second-in-points Kyler Davis.

The Burnett Scrap Metals Road Warriors were twenty-two strong on New England Federal Credit Union Labor Day Classic Sunday. ‘Barbie Boy’ Frank Putney took advantage of the heat race invert to lead the way by lap 10. The lone caution on lap 17 for debris set a dog fight for the final laps but Putney prevailed against all comers. Frank Putney would take down the Labor Day win followed by Ryan Foster and Jamie Buick.

The Thunder Road 2022 championship season all comes down to this Friday, September 9th with WDEV/Calkins Portable Toilets Championship Night. The Maplewood/Irving Oil Late Model King of the Road will be crowned along with championship ceremonies for the Lenny’s Shoe & Apparel Flying Tigers and rk Miles Street Stocks. The Burnett Scrap Metals Road Warriors complete a full card of championship stock car racing on one of the most important dates on the annual calendar. Full schedule and price will soon be available online at www.thunderroadvt.com/schedule.