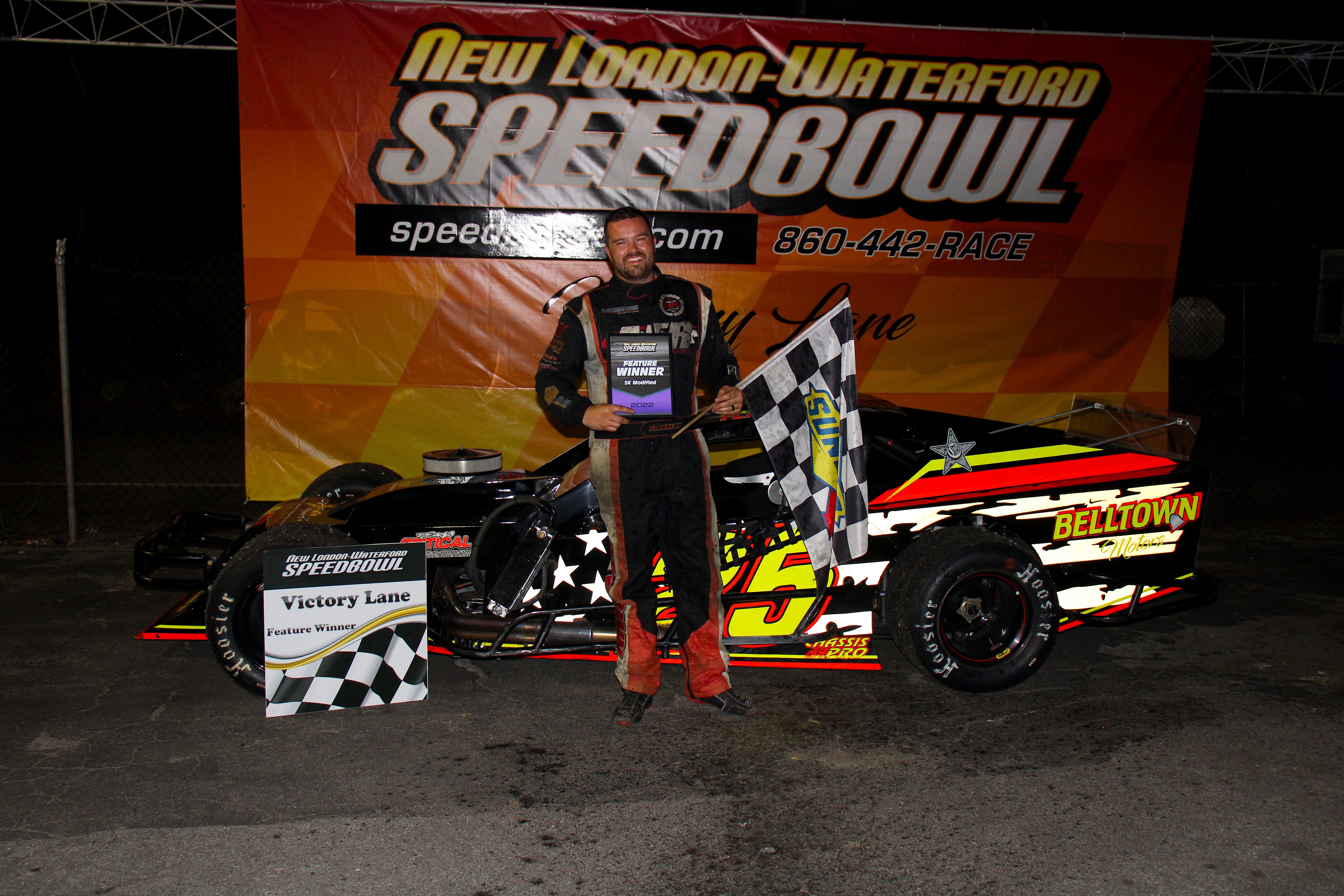 WATERFORD — In a 24-hour period this weekend, Anthony Flannery of East Hartford experience the lowest of valleys and the highest of peaks. The valley took place Friday at Stafford Speedway when Flannery badly destroyed his car in an incident in the front stretch wall.

It didn’t take long, however, for Death Valley to turn into Mount Everest. Flannery dominated the 35-lap SK Modified feature for the first SK win in his career.

Flannery’s comeback win was only one of the highlights in a 7-division show. Other winners were Evan Bourgeois in the SK Light Modifieds, Ray Christian in the Late Models, Brian Norman in the Street Stocks, Ryan Lineham in the Open Street Stocks, Brody Monahan in the Legends and Milania Shilosky in the first leg of the Bandolero Fall Shootout.

Flannery’s wreck-to-riches story, however, was the highlight. He pounced into the lead on the first lap, lost the advantage to Eric Berndt and then tracked him down a few laps later en route to the win.

“I could see that Eric was getting tight, so I made my move,” Flannery said. “This means a lot, to win in the premiere division.”

Flannery had won championships in the Legend and Late Model divisions, but this was his first SK win.

“Just think, last night my car was on a flatbed and tonight I’m in victory lane,” Flannery said. “I think that tells you what this sport is all about.

“It gives me a lot of satisfaction to know that a car I built is doing so well,” Owen said. “Anthony did a great job.”

Evan Bourgeois wasted no time to grab the upper hand in the 25-SK Light feature. He made a dazzling move on the opening lap and held on for his second win of the season.

“We have been struggling with this car for the past three months,” Bourgeois said. “It’s nice to finally get back on the podium.”

Doug Curry and Jordan Hadley created some early problems for Late Model point leader Ray Christian, but he was able to surge into the lead with an inside move. Then when Hadley and Curry were involved in an altercation, Christian was able to stomp into the winner’s circle for the fifth time this season.

“That was a lot of fun,” Christian said. “There was some great competition out there tonight.”

Glen Thomas Jr., whose car was wrecked the last time he was at the Speedbowl, was second and Andrew Molleur was third.

Brian Norman said the week off for the Street Stocks helped him prepare for Saturday’s 25-lap victory. Her jumped in front early and dominated the rest of the way.

“I had a couple of weeks off to think about the mistakes I was making and tonight I’m super pumped,” Norman said.

“I have to give Al a lot of credit,” Macrino said. “He raced me clean and it was a great battle.”

Brody Monahan captured the 25-lap Legends feature, but it wasn’t easy. Jake Mongeon, in only his third Speedbowl race, was applying the pressure.

“I thought I was going to lose it,” Monahan said, “but I just hung on. I don’t even know how I did it. I was just hoping. The car was terrible in practice. But we didn’t give up.”

Mongeon was second and Wake Oemeke was third.

Ryan Lineham, one of the best fender-car drivers in New England, dominated from start to finish to win a 25-lap Open Street Stock was that went green to checker.

“I love running her and I try to get here whenever I can,” Lineham said. “Sometimes you don’t know about caution flags, but everything worked out for me.”

Adam Gray was second and Christopher Buffone was third.

Milania Shilosky strutted to win a win in the first leg of the Bandolero Fall Shootout Series, with Sam Macedo second and Allyha Desomma third.

It was Shilosky’s 14th career win, making her the all-time female win leader at the Speedbowl.

Shilosky will be trying to nail down the regular season Wednesday title during championship night Wednesday for Wild & Wacky Wednesday. Also in action are the Super-X Cars, X-Cars and Legends.