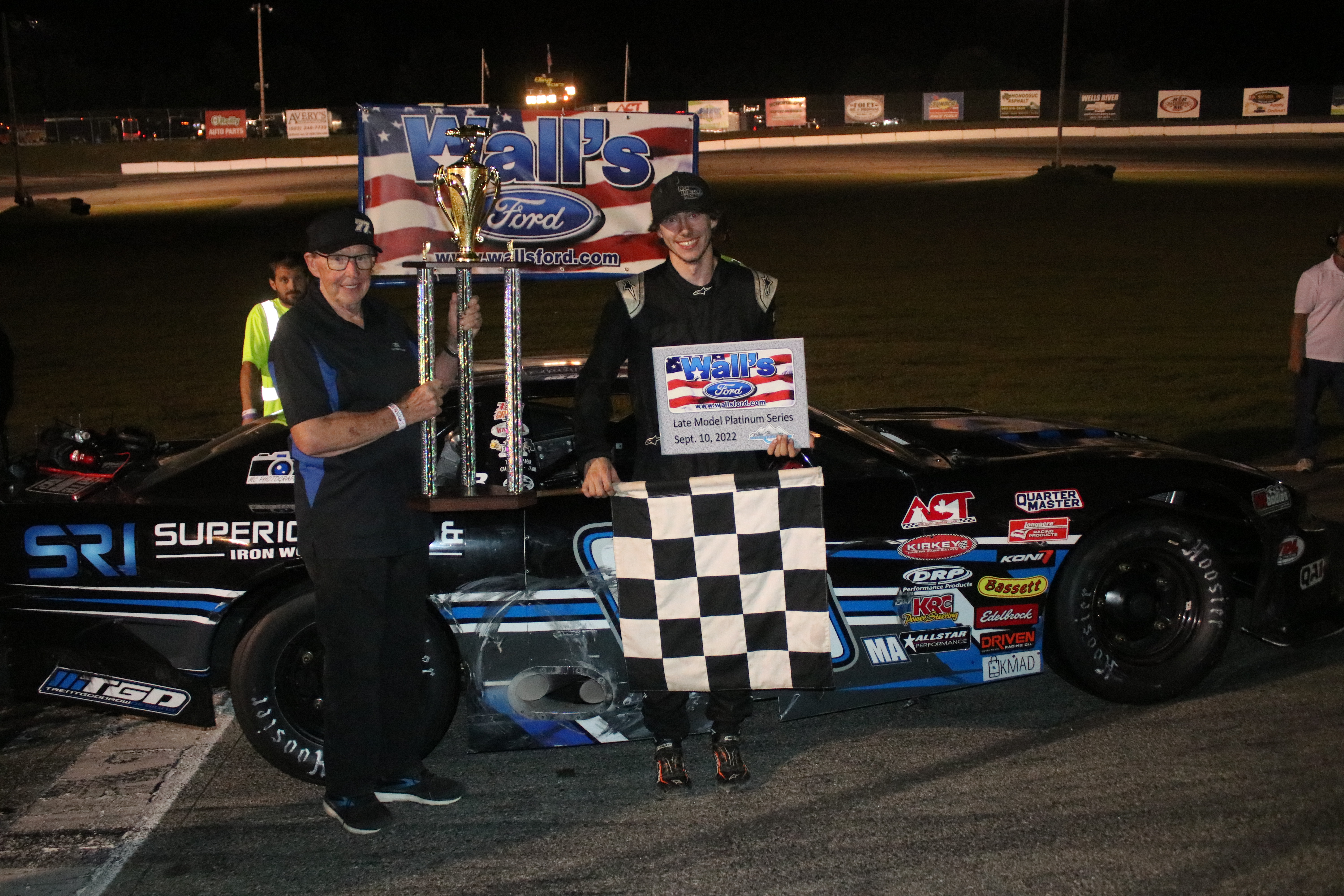 N. Woodstock, NH- With the 2022 White Mountain Motorsports Park season coming to a close over the next few weeks in September, the pressure was on for all to perform, and it showed. The inaugural Wall’s Ford Platinum Series was on the line for the Foley Oil & Propane Late Models with the Wells River Chevrolet Flying Tigers having the closest point battle in recent memory. It was also a spotlight night for the Ammonoosuc Asphalt Mini Late Models with their 50-lap, $1,000-to-win special. Add in the Dad’s 4 By Tool & Supply Kids Division and the Woodsville Guaranty Savings Bank Strictly Stock Minis, and you’ve got an exciting night of Saturday night Thunder in the Mountains.

Starting the night off, the Dad’s 4 By Tool & Supply Kids Division took off under the green flag. McKenna Merchant drove the wheels off her 99-machine, stalked closely by Austin Sicard. Kyle Goodbout carefully rounded the 18x Ford Mustang of Walker Fitch as the lightning-fast event was nearing completion. McKenna Merchant once again found herself in victory lane, taking the win on Wall’s Ford night. After stepping up his program and his skill behind the wheel, young Austin Sicard found his way back into the winners circle for 2nd-place followed by Kyle Goodbout in 3rd.

Another quick feature followed the Kids, this time it was the Woodsville Guaranty Savings Bank Strictly Stock Minis. Former champion Adam Sicard led from the start as polesitter Gavin McGinnis slid back on the inside line. Point chaser Donnie Baumgardner was black flagged on lap 15 with fluid pouring out of the right rear of his #4-machine while the battle up front intensified. After putting on a serious challenge for the lead, Les Washburn started to back track after the halfway point as a two-by-two gaggle of cars fighting for third-place pulled ever closer. As laps began to wind down to the close, Tyler Thompson and Chris Moulton pulled to the outside of Washburn and drag raced the veteran to the finish line. Adam Sicard claimed his second win of the season followed by Tyler Thompson over Les Washburn at the line to round out the podium.

Not to be outdone, the Wells River Chevrolet Flying Tigers also took it green to checkers for their 35-lap Wall’s Ford trophy dash. Led to green by rookie contenders Thomas Smithers IV and Chandler Potter, the two remained doorhandle-to-doorhandle through the first 18 laps of the event with the entire top-ten following suit behind them. The side-by-side freight trains finally broke on lap 20 with Jody Sicard sneaking under Smithers as Potter began to falter on the outside. By lap 21, Sicard secured the top spot as the field began to make moves with time winding down.

The only real threat of a yellow flag came on lap 24 when a scuffle between Mike Clark, Shane Sicard and Smithers sent the three scattering in turn one. All three remained pointed in the right direction and under power to keep the event green. Both Clark and top rookie Kaiden Fisher used the incident to their advantage with Clark holding onto second and Fisher in a side-by-side duel with Sicard. On the final lap, Fisher and Shane Sicard battled hard on the backstretch, into turns three and four before Fisher narrowly edged the multi-time champion at the line for third. Jody Sicard would take a hard earned and much deserved first win of the season with Mike Clark taking second in the 2NH.

The Ammonoosuc Asphalt Mini Late Models showed up in full force for their 50-lap, $1,000-to-win special event on Wall’s Ford Platinum Series championship night. Twenty-five entered the White Mountain pit area in search of the top prize with twenty-two taking the main event green flag. The 50-lap feature would be a war of attrition with hard racing and mechanical failures taking their toll on teams. Nick Skillings and Greg Millette battled hard for the first ten laps before inaugural Ammonoosuc Asphalt Mini Late Model winner Matt Sonnhalter had major problems in turn three, spilling fluid across the corner and calling out the caution flag.

On the restart, Skillings pulled to the lead ahead of Millette. On lap 18 Millette tried to nose in under the white-line-hugging Skillings in turn four, spinning both of them into the infield and calling the yellow flag once again. Now led to green by Jerrod Soucy and Jake Rheaume, Matt LeBlanc would jump to the bottom on the restart from third-place, making it three-wide across the line under the green flag. After taking the lead, LeBlanc would be challenged by Soucy to his outside with Soucy edging for the lead at the halfway point.

Part failures would strike again with early leaders Nick Skillings and Greg Millette both done for the night by lap 35. A fire on pit road under the hood of Millette would bring out another caution as Speedway Safety Service took off to safely put the fire out with oil pouring from the blown block of Millette. On the final restart, Soucy would lead as the #18 of Rheaume slid back on the outside, allowing Nick Anderson the real estate he needed to challenge the top runner, but quickly ran out of laps. Jerrod Soucy would take down the $1,000 win followed by Mini Late Model point leader Nick Anderson and Kenny Marrier taking third after sliding up through the field barely missing several catastrophic accidents in his path.

The big show was the final event in the inaugural Wall’s Ford Platinum Late Model Series. After taking down the Spring Board 100 in June and the New Hampshire Governor’s Cup in July, North Dartmouth, Massachusetts-driver Derek Gluchacki held the points lead but was far from out-of-the-woods. Utilizing the American-Canadian Tour Plus/Minus handicap system, Kasey Beattie led from the pole after taking a +5 in his heat race beside Jesse Switser who started outside pole by virtue of his +4. Both White Mountain top runners battled side-by-side in the early stages with Switser taking the lead on lap 7.

The first caution flag of the event would wave on lap 18 for the stopped Matt Anderson in turn three following a loud pop and small flame from a burnt-out ignition. On the restart, Beattie powered under Switser as the pair remained double-file out front. Switser would once again regain the lead on lap 32 with Gluchacki getting dangerously closer in third. Beattie would get under Switser on lap 41 to take back the top spot with Switser coming back on lap 61 to lead once again. Gluchacki would follow Switser under Beattie to move into second before the second yellow would fly on lap 67 for the stopped Alby Ovitt on the top of turn four.

The restart setup the first duel between Switser and Gluchacki with Switser choosing the outside lane. Gluchacki’s Ford was stronger on the bottom than Switser’s Ford on the top with the #03MA leading the White Mountain local until the lap 71 caution for a stalled Pat Patten in the frontstretch grass. On the restart, Gluchacki understandably chose the inside lane and never looked back. Derek Gluchacki took down his third win of the White Mountain season, sweeping the three Wall’s Ford Platinum Series events. By taking the $1,500 top prize and the $750 championship, Gluchacki pocket a cool $2,250 on Saturday as the inaugural Wall’s Ford Platinum Series Champion. In the closing laps, Jesse Switser would stay ahead of Kasey Beattie to claim second with Beattie taking third. Multi-time Thunder Road track champion Scott Dragon would take fourth with Quinny Welch rounding out the top-five.

White Mountain Motorsports Park returns with an epic Fall Foliage doubleheader weekend. Saturday, September 17 brings the Pro All Stars Series Super Late Models and Modifieds back to the White Mountains alongside the New England Dwarf Car Series, Dad’s 4 By Tool & Supply Kids Division and the final round in the 2022 Championship for the Woodsville Guaranty Savings Bank Strictly Stock Minis.