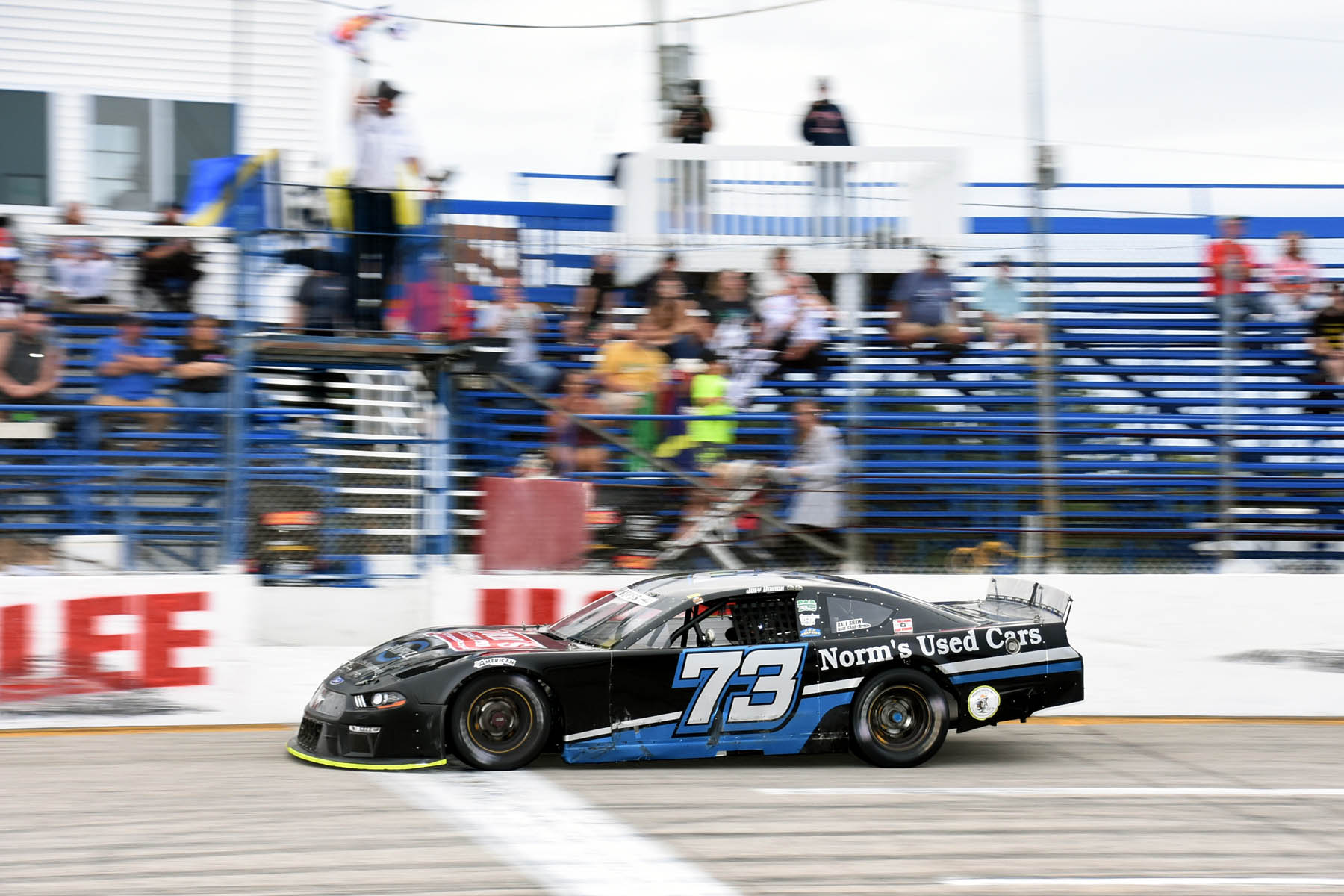 Lee, NH- Joey Doiron felt like he had $10,000 taken away from him earlier this year at Lee USA Speedway. On Sunday he wouldn’t miss out on the big payday.

Doiron saved tires early in the race, and methodically worked his way forward, slipping past Bryan Kruczek on lap 112. Doiron pulled away over the final 38 laps, cruising to the win and the $10,000 check. In victory lane, Doiron said he felt like circumstances cost him a shot at the big paycheck back in July when Casey Call edged NASCAR driver Tyler Reddick in the Granite State Pro Stock race. Doiron finished fourth that day, but it left a bad taste in his mouth. On Sunday he got a measure of redemption.

“I love this type of racing,” Doiron said. “I just let them get away at the start and kind of stayed the same steady pace I was going. I felt like we had a little bit left in the tank at the end. Those guys fell off a lot harder. The longer races here that seems to be where we’re beating everybody, is the last 70 laps of the race. They’re going the other way and we can keep going forward.”

Garrett Hall jumped to the lead early, but after the race’s only caution – a lap 3 Adam Gray spin – but by lap eight Anthony Belsito had found his way past Hall and into the lead. Belsito would pull away from Bryan Kruczek, but his car would betray him on lap 35 when a mechanical failure forced him to retire to the infield.

Kruczek inherited the lead when Belsito pulled off, and led from lap 35 until Doiron overtook him on lap 112.

“We missed the set up just a little bit,” Kruczek said. “I know we led a lot of laps, but we changed a few things from the spring until now, and I’m kicking myself in the butt a little bit now. We just got a little free in. Joey gets free in, but he can cut to the bottom right afterwards. That’s his forte here.”

Kruczek’s drive to the finish was made even more challenging around lap 90 when the exhaust on the right side of his car broke off and dangled out for the remainder of the race. He said the car lost some power at that point, but that wasn’t the biggest challenge, as exhaust fumes were coming into the car over the last 50-60 laps. He was visibly exhausted when he exited the car in victory lane after the race, sitting to gather himself before his post-race interview.

“When the exhaust fell off, that really hurt it,” Kruczek said. “One of the lapped cars caught the door piece and folded it back, and it fell off about four laps later. It didn’t help the horsepower part of it, at all.”

The race was the final points counting Pro Stock race at Lee for their NASCAR season, and Brandon Barker and Ryan Green entered the night tied for the championship, and both drivers were just two points ahead of Jimmy Renfrew Jr. It was Barker who came out with a third place finish on Sunday, earning him the championship in the first season of Pro Stocks as the Division I NASCAR

“I didn’t really think about points going into the day,” Barker said. “I just wanted to win and that would take care of itself. In the past five races this is the fifth car I’ve driven, so I was a little nervous because I never turned a lap in it until today. It’s pretty good though.”

“Pretty good” was good enough to earn the track championship in Lee USA Speedway’s return to Pro Stock racing in 2022. Barker said the championship, as well as Sunday’s third place finish are a testament to his team.

“I’ve got the best group of guys,” he said. “We all get along. This championship deal just kind of came along. I came to the first race and did well, and I think my worst finish was fifth. We didn’t think about points at all. You can’t let it get to your head. Just show up and do the best you can with the cards you’re given.”

On Sunday Barker lingered towards the back of the top five for the first half of the race, but he saved enough early to charge back through and ended up finishing one spot ahead of Renfrew Jr on the track to secure the championship.

Renfrew, Mike Hopkins, Jeremy Davis, Wayne Helliwell Jr., Ryan Green, Casey Call and Dave Farrington Jr. rounded out the top 10. Davis and Hopkins were charging hard at the end, but the race went clean and green for the final 147 of 150 laps and they ran out of time on their forward charges.

The Exit Realty Pro Truck Series was in attendance on Sunday as well, and Connor Souza jumped out to a quick lead, but Devin Deshaies was close in tow, lurking in Souza’s shadow for the first several laps. When he got a glimpse of daylight underneath Souza, it was all Deshaies needed as he pounced and moved into the lead, then never looked back. Souza held on for second place, while Randy Burr came home third.

“We tried to do good in practice and qualifying,” Deshaies said. “We were first or second fastest in practice, and we won the heat race. We started first in the feature and (Souza) got in front of us and I just tried to stay behind him, ride up for a little bit, then try to get in front of him when the opportunity came. I was just waiting for the right moment.”

The moment was right for four other champions on Sunday as well, as Lee USA Speedway crowned champions in their Street Stock, Six Shooter and Pure Stock divisions as well as crowning the NHSTRA Battle For the Belt winner in the Street Stock division.

The 50-lap Street Stock Battle For the Belt race drew 26 competitors, 25 of whom started the race, but it was Nik Maniatis who jumped to the lead early, then ran away and hid from the rest of the field. Milton Duran settled into second place, while securing his first Street Stock track championship, and although Jim Storace crossed the line third, David Greenslit inherited the final podium spot after post-race tech inspection. Along with the third place finish, Greenslit secured the Battle For the Belt championship over Geoff Rollins.

Rollins and Greenslit battled mid pack early in the race, and both moved to the front together, but the handle started to go away on Rollins’ car late in the race while Greenslit didn’t fall off as much. Hayden Grenier, Rollins, Kris Schroeder, Justin Beecher, Austin Erickson, Chris Buffone and Patrick Tanguay rounded out the top 10.

“This is great,” Greenslit said. “This isn’t our best track, for sure, but we’re starting to get the place and we were hanging right there top three, top four all day. The car was a little free, but we managed to capitalize and bring home the belt, and that’s all we were here to do. We weren’t here to win, we were just here to finish consistent and bring that home.“

“We always have success here,” Duran said. “Alby (Ovitt)’s won (a championship), Jimmy’s won it, so we’ve always had a really good car here and I have a really good backing. It’s my second year in a street stock and we’re learning quickly, so it’s great to close it out.”

The Six Shooter championship was decided by about eight feet on the track, as Tom Harton and Adam Knowles, who had battled atop the standings all year came into the night just four points apart. Harton had to finish two spots ahead of Knowles to earn the championship. Harton patiently rode behind Knowles for much of the race, but jumped to the outside in the late stages, getting past Knowles and setting his sights on second place runner Gary Grenier. As the checkered flag waved, however, Grenier beat Harton to the line by about a half a car, handing the championship to Knowles – his second in the last four years.

“It feels awesome to win my second Lee championship, and my third overall” Knowles said. “It was a tough season, running two tracks (Lee USA Speedway and Star Speedway). I wrecked my car in early July and had to use two other cars to get here.”

He said the racing community came through for him. First it was young competitor Jenna Beaulieau who loaned him her car to compete one night when he couldn’t get his back together in time, then it was former competitor Scott Byron who loaned his car to Knowles to complete the campaign. In the end, it was just enough.

“I have a ton of support and respect from others, and many cars were offered to me,” Knowles said. “I can’t thank everyone who supported me enough.”

Like the Pro Stock points, the two competitors atop the Pure Stock standings came into the final race of the season in a tie. Reigning champion Noah McGrath and Justin Faford came into the day tied, but it was Faford who climbed to the front of the pack and secured the championship with a walk-off win. McGrath recovered from an early race flat tire for a second place finish, but was disqualified in post-race tech inspection, along with third place finisher Ernie Coates. The two disqualifications elevated Adam Bousquet into a second place finish, and Faford’s father Bill Faford into third. Jeff Turcotte and Darrell Quinlan rounded out the top five.

“I’ve been trying to win a championship up here for a while,” Justin Faford said. “Particularly up here. This is my favorite track to race at. It’s a great feeling to win it in this car too. Me and this car have been through a lot. It’s a car I got for free. I inherited it through a death in the family and just kind of kept building on it. It taught me a lot about front wheel drive cars, and now it’s pretty dominant here. So this is a good feeling.”