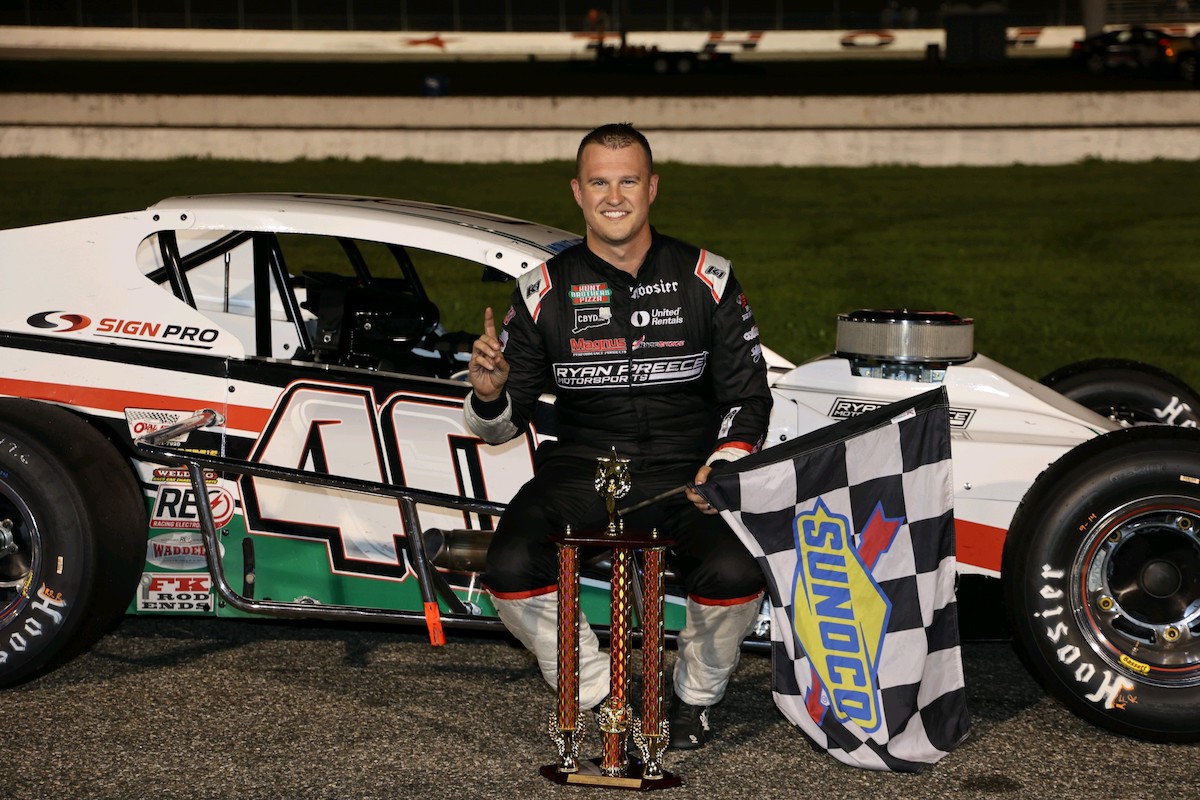 ” Obviously 75 laps no one was changing tires. You didn’t want to burn your stuff up. It was a lot of passing back and fourth.  Right around lap 25-30 or 40 was going to be track position when everyone’s stuff starts to wear out a little bit. I wanted to be the one that they were chasing. We had a really good car.” Preece Said

” He (Preece) just got away from us a little bit too far. Had the battle with (Tommy) Barrett for a while with an ill-handling race car.  Just not what we wanted. Kind of the same thing we had in practice. Now we know for the next time.  We had a solid race. We were catching him there at the end. Maybe five more laps. He was loosening up pretty big.” Williams Said

” It was alright. Just didn’t have the car tonight. I was free in and then big tight center but once I got to the bottom. The free in went away but I was tight in the center. Just couldn’t get through it. Just want to say thanks to ACT for putting this on and the fans coming out to support.” Christopher, Jr Said

Derek Gluchacki and Ryan Morgan had a great battle for the lead in the 25 lap Late Model race. Both drivers made contact as the swap the lead many times in the final half of the race.  Morgan would edge out Gluchacki for the victory by .150 seconds. Matt Lowinski-Loh finished in third. Brian Tagg finished in fourth and Jordan Hadley rounded out the top five.

Kevin Moore won the 15 lap Mini Stock race as he took the lead from Steve Michalski with three laps to go to. Michalski finished in second and Ryan Pomposelli finished in third

There were two 20 lap Limited Sportsmen features as Zach Robinson won the first one and Corey Fanning won the second one.

Steven Chapman held off Corey Caddick in the final laps of the 20 lap SK Lights race.  Meghan Fuller earned her best career finish at the 5/8 mile oval as she finished in third.

Thompson Speedway Motorsports Park will be back in action for the 60th annual Sunoco World Series of Racing presented by Budweiser that will take place on Friday, October 7 through Sunday, October 9 that will feature the NASCAR Whelen Modified Tour, the Sunoco 100 Outlaw Open Modified Series race where the winner will go home with $10,000.  The Modified Racing Series will make a return after a small hiatus.  The American Canadian Tour Late Models and the Pro All Star Series Super Late Models will be apart of the weekend.

Some drivers during the weekend will race in more than one race. Mike Christopher, Jr is planning on racing in the Sunoco Modified Triple Crown with his team that weekend along with the Modified Racing Series event on Friday and the Outlaw Open Modified race on Saturday and maybe the NASCAR Whelen Modified Tour race on Sunday for Tommy Baldwin Racing.

A full division line up and a weekend schedule will be announced at a later date.