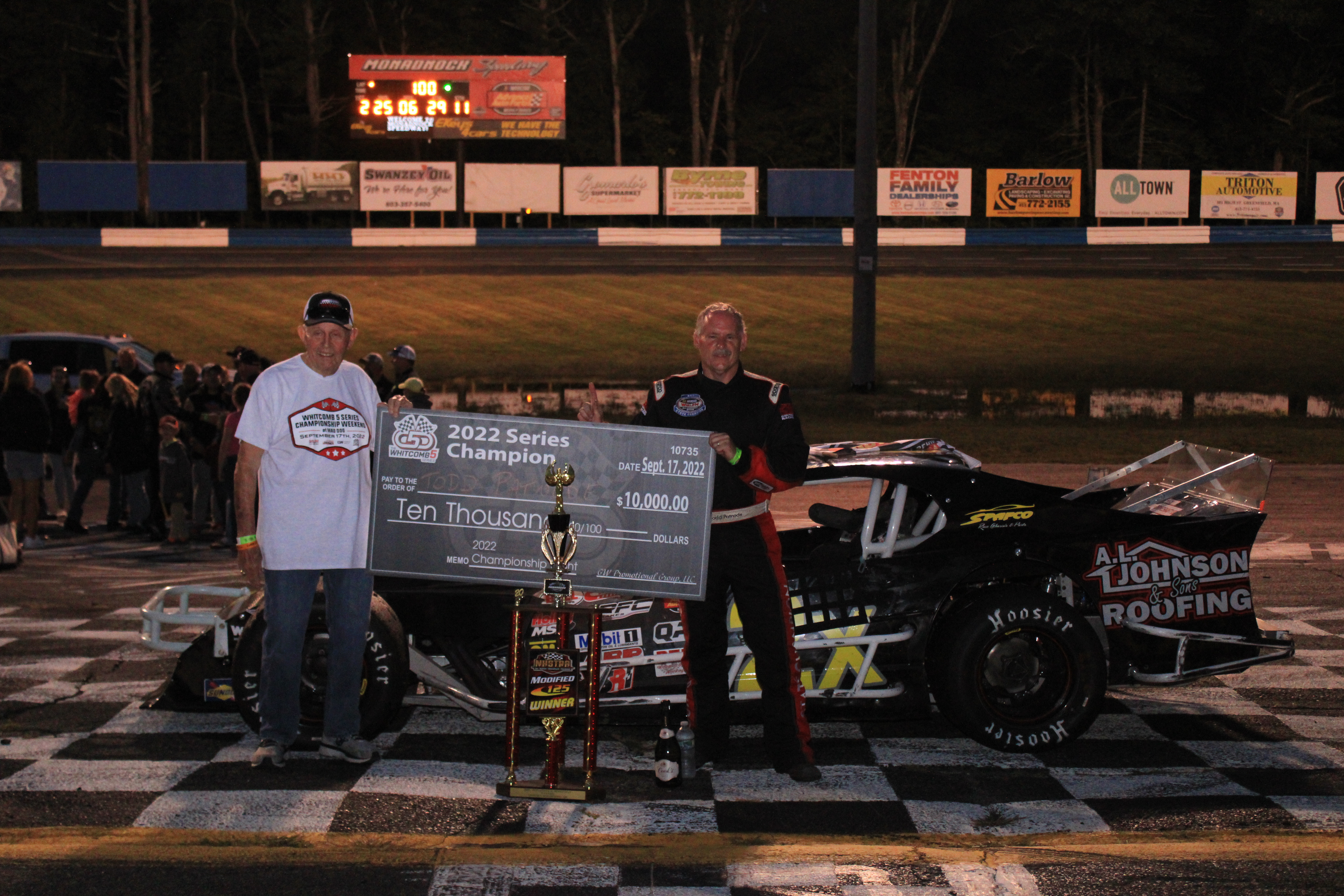 Punctuating his first Street Stock championship with his fourth feature win of the summer, Tim Wenzel earned the crown vacated just a year ago by his brother, Nate Wenzel, this season’s Monadnock Modified Rookie of The Year.

Justin Littlewood did what he had to do Saturday to win the speedway’s Late Model Sportsman championship, while Gordon Farnum, who’d clinched his title a week earlier, roared to his 12th Mini Stock victory of the summer, that after 11 victories a year ago.

Youthful speedster JD Stockwell, still a year too young to hold a driver’s license, soared to victory in the final Pure Stock feature of the season and, with that win, wrapped up the 2022 track championship. It was the Bay State teen’s fifth win of the season on the high banks.

With Modified ace Ben Byrne unable to participate in Saturday’s 100-lap season finale, all Leary had to do was take the green to wrap up his first career Modified championship. But before that could be celebrated, there were 100 laps of Whitcomb 5 Series racing to be completed.

Former track champ Brian Robie set fast time in qualifying for the 17-car Modified main event, but it was Patnode, victorious way back on May 1 in the 125-lap five-event series opener here, that dominated Saturday’s action with his second Whitcomb 5 victory of the summer.

Alyssa Rivera supplied much of the early pressure and Matt Kimball, potent as always, leaned all over Patnode in the later laps before his tires went away. Robie, strong all day, finished at Patnode’s bumper in second, with Sam Rameau, second back on May 1, third on the day.

Justin Littlewood entered Saturday’s Late Model Sportsman season finale just two points ahead of his brother Cole in the title chase. With Ryan Bell winning his first feature of the season, and Ryan Currier second, the younger Littlewood did all he had to, finishing three spots better than his brother, to secure his first LMS championship.

Tim Wenzel needed only a decent finish to wrap up his first career Street Stock title. Instead, he finished in championship form, passing Kenny Thompson for the lead and the victory Saturday to earn the title won by his brother a summer ago.

While Thompson gave up the lead, he never gave up the fight, powering to second Saturday, with one-armed Hillary Renaud, victorious the last two times out, coming home third.

JD Stockwell and four-time track champ Chris Davis entered Saturday’s season finale only two points apart. Fate was not on the 51-year-young defending track champ’s side though, as mid-race issues dropped him to tenth on the day, as the 15-year-old Stockwell, recovered from his own mid-race wobble to win both Saturday’s 25-lap feature and the 2022 Monadnock Pure Stock championship.

Having her own day to remember, Young Gun graduate Teagan Edson finished just behind Stockwell in a career-best second, with steady Jimmy Zellman third.

Lebanon, Maine youngster Traver Michaud won his second Young Gun feature of the summer Saturday. Owen Zilinski was second, and Addison Brooks third. Aaliyah Tacy’s bid for three wins in a row fell by the wayside in a heat race wreck, with Emma Blake topping that qualifying race for her first.

A field of five Spectator Race street-legal entries squared – or, in this case – ovaled off in a five-lap feature. Mini Stocker Chris Sontag, in his Subaru, edged A+ Towing ace Kenny Howe and his Mopar for top bragging rights.

In the final event of Monadnock Speedway’s  racing season, a field of 34 cars went to battle in the 62-lap NHSTRA King of The Hill Linda Zuverino Memorial Enduro. Unofficially, Matt Gauffin repeated his win of May 1 here, with Drake Nelson again second. Dickie Houle, aboard the 62 entry, came home third.