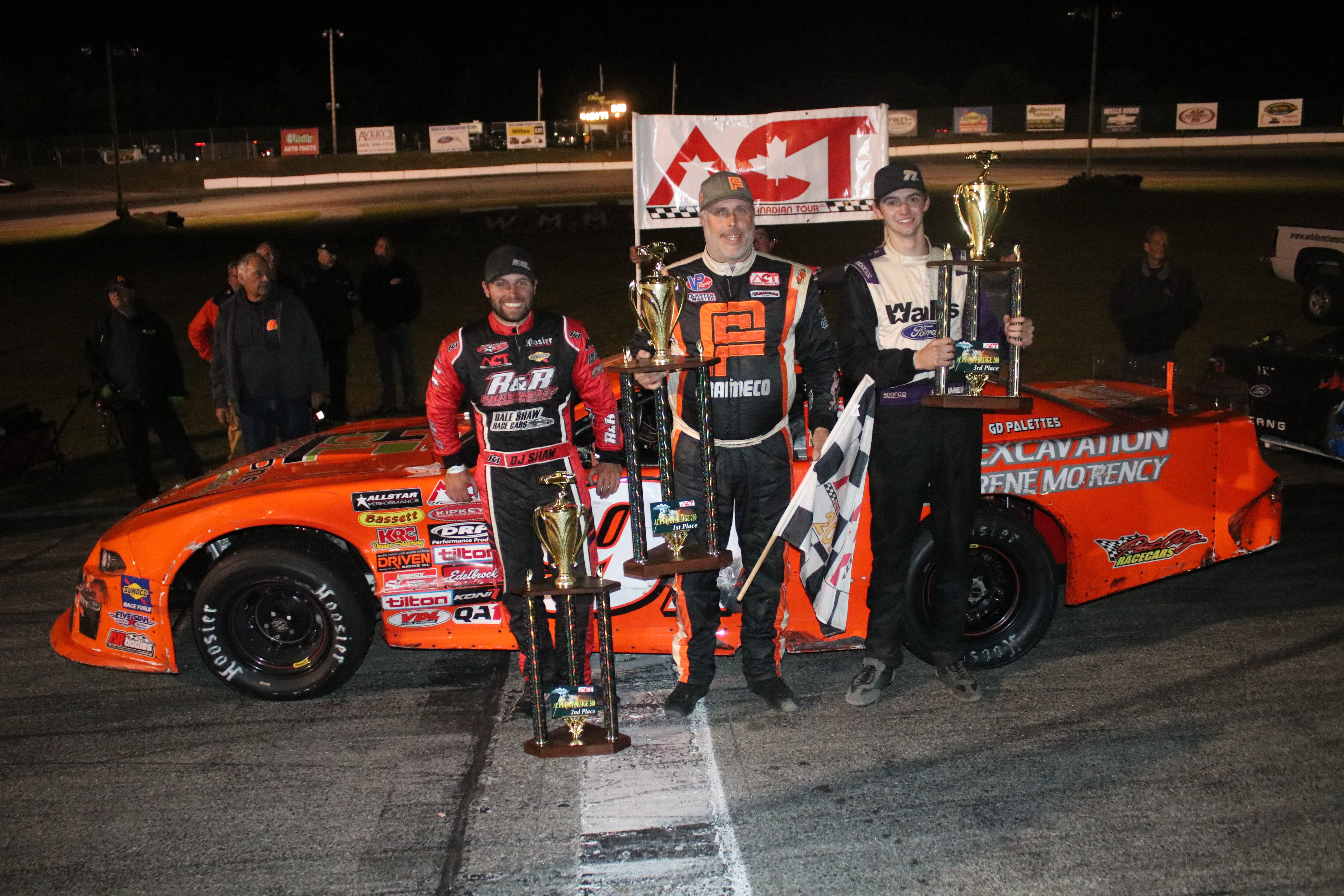 N.Woodstock, NH— Even after the certainty of weather caused a massive schedule change from a two-day weekend down to a Saturday Spectacular, the 44th Fall Foliage 200 was by all counts a huge success as touring series point battles continue and a new White Mountain Motorsports Park champion stood in victory lane. Thirty-two American-Canadian Tour teams entered the White Mountain pit area in search of the $5,000 prize with the Fall Foliage 200 itself proving to be quite the match race between some of the greatest wheelmen in the current era of the American-Canadian Tour.

Courtesy of his +5 in Heat Two, White Mountain rookie point leader Bryan Wall Jr. earned the pole starting position utilizing the ACT Plus/Minus handicap system. In a similar nod to the White Mountain competition, current King of the Mountain track champion point leader Quinny Welch started outside the youngster to complete the front row with his own +3 earned in Heat One.

Trouble started early as an accordion effect under the starting green flag bunched up the middle of the field calling out the first caution. Beattie would end a solid day of Tour racing with steering issues and defending winner Hebert would park the 58VT with an unhinged sway bar.

On the restart Welch would overtake ACT rookie point chaser Cody LeBlanc with former Quebec Champion Alex Labbe stalking in third. As Welch began to stretch his early lead, Tom Carey III and Patrick Laperle found themselves driving into top-5 contention until the second caution flag flew on lap 13 for the spinning Shawn Swallow machine on the backstretch. Welch would choose the outside of LeBlanc for the restart and pulled away with the lead once again.

With the 78NH out front by eight-car-lengths, LeBlanc also began to pull away from the Canadian side-by-side battle between Labbe and Laperle for third. Caution number three would come on lap 25 after Derek Gluchacki made contact with D.J. Shaw on the backstretch, sending Shaw and polesitter Wall into the turn three grass. All three would find themselves in the back of the pack on the restart. Welch would get the short jump on LeBlanc once more until the caution on lap 27 for the spinning Peyton Lanphear and Matt Anderson machines in turn three.

On the restart Welch kept the lead over LeBlanc until Laperle and Joey Doiron got under the 7NH to take over the second spot. The first long green flag run saw Welch take another commanding lead followed by Laperle, Doiron, LeBlanc and Carey. The field would come back together with the lap 71 caution for the flat right front of Randy Potter, coming to a stop high in turn two. Both Peyton Lanphear and Derek Gluchacki ended their day early through mechanical faults under the hood.

The first restart between Laperle and Welch saw Welch pull ‘Le Grande Laperle’ and hold onto the lead until a lap 83 caution for the spinning Dylan Bilodeau in turn two. The restart would again be short-lived with the Keegan Lamson machine making contact with top ACT rookie Alexendre Tardif on lap 86.

The third dogfight restart between Laperle and Welch again saw Welch power up on the outside groove to keep the lead. The longest green flag stretch of the race commenced with Welch taking another commanding lead over Laperle, Doiron and Carey. After pitting on an earlier caution for tires, D.J. Shaw came into the top-5 picture with fifty laps to go and got the gift of a closed-up restart with the spinning Alex Labbe and Jaden Perry on lap 158.

Welch again pulled Laperle but only by a nose as they returned to the line with Shaw and Doiron stalking their every move in third and fourth. The Big One happened on lap 161 as contact sent the 36NH of Erick Sands hard into the turn three tire barrier with a pileup collecting multiple drivers, including Doiron, Raphael Lessard and Scott Dragon. The biggest development of the race also occurred when under pace laps Quinny Welch ran out of fuel, forcing him to give up the lead as he was pushed pit side.

It was now Laperle versus Shaw. Laperle chose the outside for the restart and pulled away from Shaw. Over the next 39 laps, Shaw would try the inside of Laperle multiple times but just didn’t have quite enough bite on the bottom of the Canadian. All the while Tom Carey III sat in third, the catbird seat, waiting for any bobble from the leaders ahead of him to make a move.

Under the white flag, Laperle found himself in a jam as he came up on the last lead lap car of Dylan Bilodeau with Shaw still just inches behind him. Coming out of turn two Bilodeau slowed, slowing Laperle and allowing Shaw to dive underneath as they motored into turn three. Contact between the two had Laperle completely sidewise on the front bumper of Shaw as Tom Carey and Bryan Wall jumped to the rumble strips to ramrod around the leaders. Miraculously, Laperle began to right his machine, catching the right rear of Carey and spinning him backwards across the line as Laperle edged Shaw at the line by 0.023 seconds.

Patrick Laperle took down his first American-Canadian Tour win since 2018, he is the third Quebec racer to hold the ACT checkered flag in 2022 and claimed his fifth Fall Foliage 200 victory. D.J. Shaw took down his fifth podium finish of the year with second and young Bryan Wall Jr. is keeping the family legacy alive taking third place honors in just his third American-Canadian Tour start.

The American-Canadian Tour stars and cars return home to Barre, Vermont’s Thunder Road for the epic 60th Vermont Milk Bowl presented by Northfield Savings Bank. The $100,000 Vermont Milk Bowl is a non-point race for the ACT stars with 100%ers attending to maintain their status and point fund for the season. $12,000 is guaranteed to the winner with pole awards, $1,000 to win Triple-50 Heat Races, special bonuses in place and $100-per-lap money up for grabs. Not to mention the immortality of having the winners name carved in granite and the unique ability to kiss a true Vermont beauty – one lucky Jersey dairy cow! The Vermont Milk Bowl is a three-day extravaganza starting Friday, September 30th with a Pro All Stars Series invasion, Milk Bowl Qualifying day on Saturday, October 1st and the three-segment event in its entirety on Sunday, October 2nd.

The next points race for the American-Canadian Tour is set for Connecticut’s Thompson Speedway as part of the 60th Sunoco World Series presented by Budweiser. Headlining the Saturday, October 8 portion of the three-day weekend alongside the Pro All Stars Series Super Late Models and the $10,000 to win Outlaw Open Modified Sunoco 100. More information on the first leg of the three race Southern New England swing will be released in the near future.