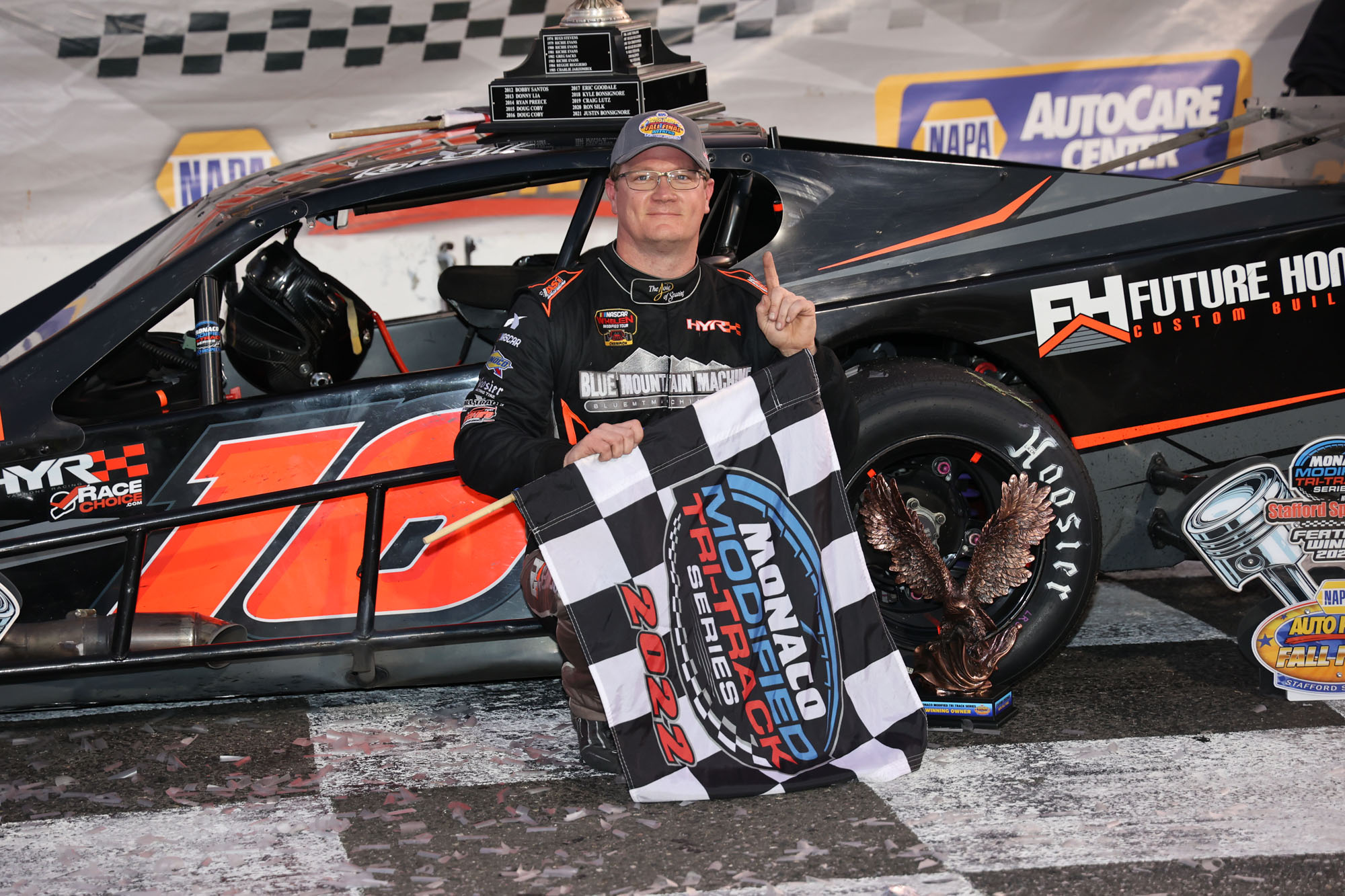 (Stafford Springs, CT)—Stafford Motor Speedway welcomed the Monaco Modified Tri-Track Series to the track $15,000 to win NAPA Fall Final.  With 51 cars on hand to qualify for 32 starting positions, there was also a 20-lap RaceChoice.com B-Main feature which allowed the winner to choose from either a $1,000 payday or to join the starting field for the 80-lap main event.  Cory DiMatteo won the race and he chose to join the 80-lap race and start in the 33rd and final starting position.

The NAPA Fall Final took the green flag with Ryan Preece and Ronnie Williams on the front row and Preece took the lead at the green with Williams in second.  Dana DiMatteo was third in line followed by Max Zachem, Michael Christopher, Jr., and Woody Pitkat.  Williams went to the outside of Preece on lap-3 to move into the lead while Zachem took third from DiMatteo.  Pitkat also got by DiMatteo to move into fourth and drop DiMatteo back to fifth, just in front of Christopher.

Woody Pitkat was starting to charge towards the front as he moved into third on lap-10 and his move brought Christopher up to fourth and Ronnie Silk up to fifth as Zachem slid from third back to sixth while Preece and Williams were still out front.  The caution flew with 16 laps complete for a spin in turn 2 by Kyle Bonsignore.

Back under green Preece took the lead with Pitkat right on his back bumper.  Pitkat took the lead from Preece on lap-17 while Williams was third in line and he was followed by Christopher and Silk.  Preece came back to the inside of Pitkat on lap-20 and he was able to retake the lead.  The order remained the same until lap-31 when Silk went by Williams to take over third place.  Preece and Williams were still the two leaders with Christopher still in fifth.  Matt Galko was sixth, followed by Craig Lutz, Zachem, Andrew Molleur, and Keith Rocco.

At the halfway point of the race, Preece was still in command but Pitkat had worked his way into second with Silk third and Christopher fourth as Williams slid back to fifth in line.  With 20 laps to go, it was still Preece, Pitkat, Silk, Christopher, and Williams at the front of the field.  The caution came out with 63 laps complete for a spin coming out of turn 2 by Buddy Charette.  Under the caution, the entire lead lap came to pit road for 2 tires and adjustments.  Preece won the race off pit road and he was followed by Williams, Lutz, Silk, Jake Johnson, Matt Hirschman, Matt Galko, Andrew Molleur, and Rocco.

On the restart going into turn 3, Preece got turned around which brought the caution back out.  This put Johnson alongside Silk for the restart with Lutz and Rocco on row 2.

Silk charged into the lead back under green with Lutz and Johnson side by side for second.  The caution came back out with 74 laps complete for a spin on the backstretch by George Bessette, Jr.

Silk took the lead on the restart with Johnson taking second.  Galko moved up to third with Matt Swanson taking fourth and Lutz slid back to fifth with Rocco in sixth.  Silk led Johnson to the checkered flag to win the NAPA Fall Final.  Galko finished third with Swanson and Lutz rounding out the top-5.

The 20-lap RaceChoice.com B-Main feature took the green with Cory DiMatteo streaking into the lead with polesitter Joey Cipriano slotting into second.  Ryan Doucette was third in line with Tyler Barry fourth and Devin O’Connell in fifth.  O’Connell took fourth from Barry on lap-7 while Burt Myers took fifth from Barry on lap-8.  Barry would slide back to eighth place as J.B. Fortin took sixth and Anthony Nocella seventh while DiMatteo continued to lead the race with Cipriano and Doucette giving chase.

DiMatteo led Cipriano to the checkered flag to win the RaceChoice.com Monaco Modified Tri-Track Series B-Main feature.  DiMatteo had a choice of taking either $1,000 for the win or he could elect to forgo the $1,000 and transfer into the 80-lap main event Monaco Modified Tri-Track Series feature event.  DiMatteo chose the race option so he became the 33rd and final car in the starting lineup for the 80-lap main event.

For more information contact the Stafford Motor Speedway track office at (860) 684-2783, or visit us on the web at www.staffordspeedway.com.