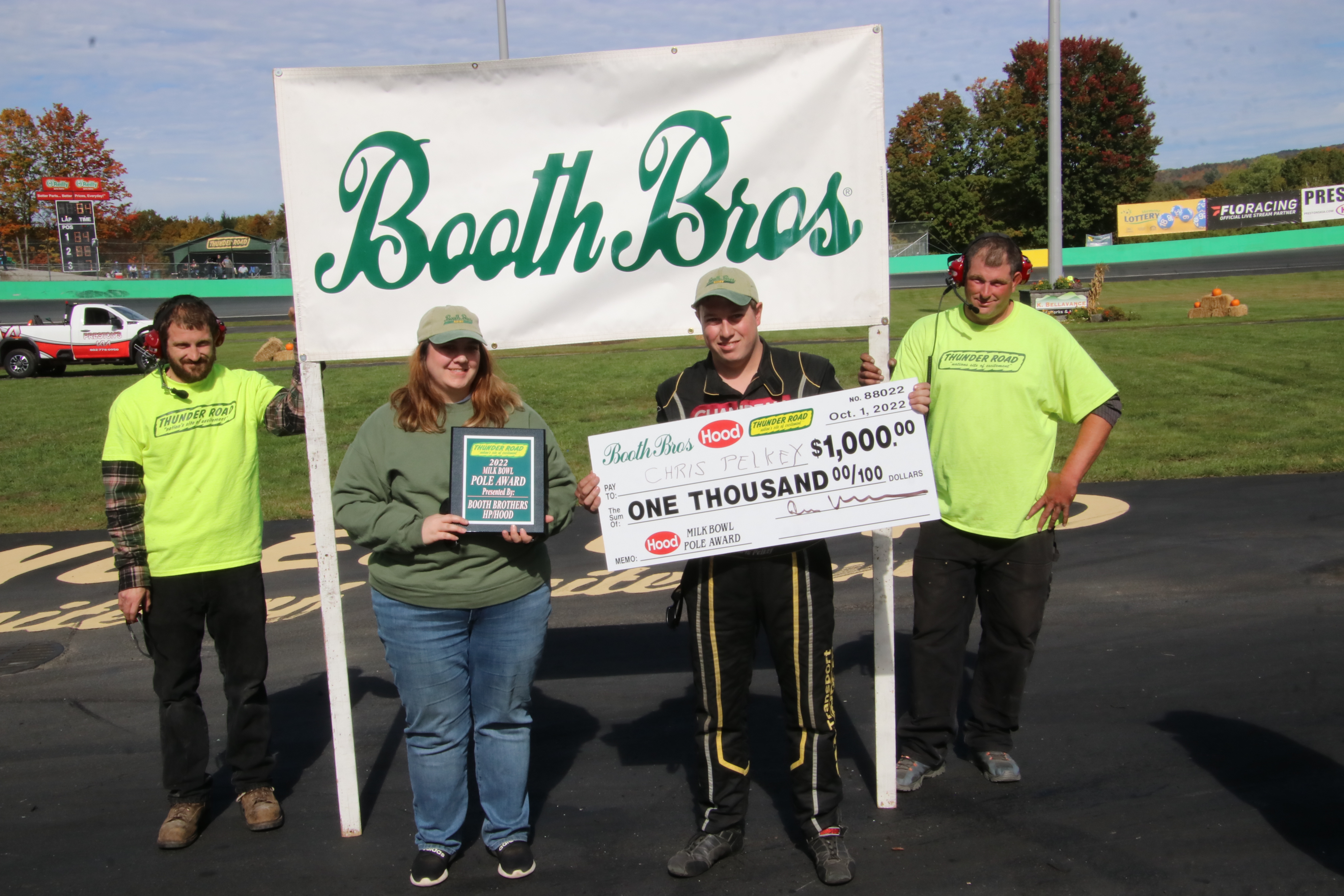 Chris Pelkey backed up his first career Thunder Road championship in 2022 by earning the pole for Sunday’s 60th annual Milk Bowl. Pelkey and fellow Thunder Road regular Marcel Gravel will make up the front row after beating out all the American Canadian Tour invaders and turning the top two times in time trials on Saturday afternoon.

Pelkey drove home the fact that his 2022 championship was no fluke by dropping a lap of 12.283 seconds around the high-banked quarter mile, while Gravel took just 12.343 seconds to get around the track in his best qualifying lap.

Pelkey said he believes he has plenty of speed in the car to come from the back in the second segment on Sunday if he can hold on and stay up front during segment one.

“That’s the idea,” he said. “You want to start back there (in stage two.) I want to thank my crew. They all worked really hard. They put the set up in it this week. Hat’s off to them.”

In addition to earning the $1000 bonus for earning the pole, Pelkey drove away from the competition during the first 50-lap qualifying heat as well. Kaiden Fisher, in just his second Late Model start, won the second 50-lap qualifier, and Jimmy Hebert won the third.

“It’s a stressful week,” Gravel said. “It’s a big week. I think we have a really good Port City Race Cars, Pete’s Equipment Sales & Rentals Camry. We’ll tune on it & see if we can get some longer run speed in it, but this is a pretty good way to start it off.”

The first segments of the Flying Tiger and Street Stock mini Milk Bowl races were held on Saturday as well, with Logan Powers and Luke Peters taking down wins. Both Powers and Peters will be in the catbird seat in their respective divisions on Sunday when they complete their second segments.

After a lap 2 pile up when the front row of Tanner Woodard and Rich Lowry got together and spun in front of the entire field, Powers restarted outside of Derrick Calkins. The two battled door to door for 19 laps before Powers was able to use a lapped car to screen Calkins and jump out to the lead. From there he held off all comers, winning segment one in his car which sported a Ralph Baldwin throwback paint scheme along with Baldwin’s customary No. 11 on the door. Powers finished ahead of Justin Prescott, Sam Caron, Calkins and Mike MacAskill.

“For us this is huge, because not only does the paint scheme mean a lot, but we’ve had such a rough year too,” Powers said. “No matter what happens tomorrow, this is the highlight of our season so far.”

Powers said his father’s cousin Mark Baldwin is Ralph Baldwin’s son, and he was happy that Baldwin’s family was up from North Carolina and saw him compete, and he was proud to hold a checkered flag while sporting the throwback look.

“It’s a throwback to someone who’s passed and someone who has built the sport,” Powers said. “I honestly had tears in my eyes carrying that checkers around. I’ve never had that car go like that on the outside. I know someone was riding with me

In segment one of the Street Stock race, Peters jumped to the lead early and withstood several restarts to hold on. Perhaps the most difficult of which came when the yellow flag flew on lap 24 of the 25 lap segment.

Peters restarted inside of a hard charging Taylor Hoar, but was able to drive away for the segment win. Dean Switser Jr followed him across the line with Hoar coming home third. Tommy Smith and Justin Blakely rounded out the top-5.

“It feels great. My first win in a 25 lap race,” said Peters. “But it puts me so far ahead of these other people. Hopefully can stay out of trouble and play it clean and hopefully things will turn out for the best.”

Two races saw both segments completed on Saturday – The Strictly Minis and kids division from White Mountain Motorsports Park came to play at the high banks of Thunder Road.

“It’s great to come Milk Bowl weekend and win,” Pilotte said. “For Cris (Michaud) and Pat (Malone) to let us to come over from White Mountain and bring our cars here and just have a fun race. It was a great time.”