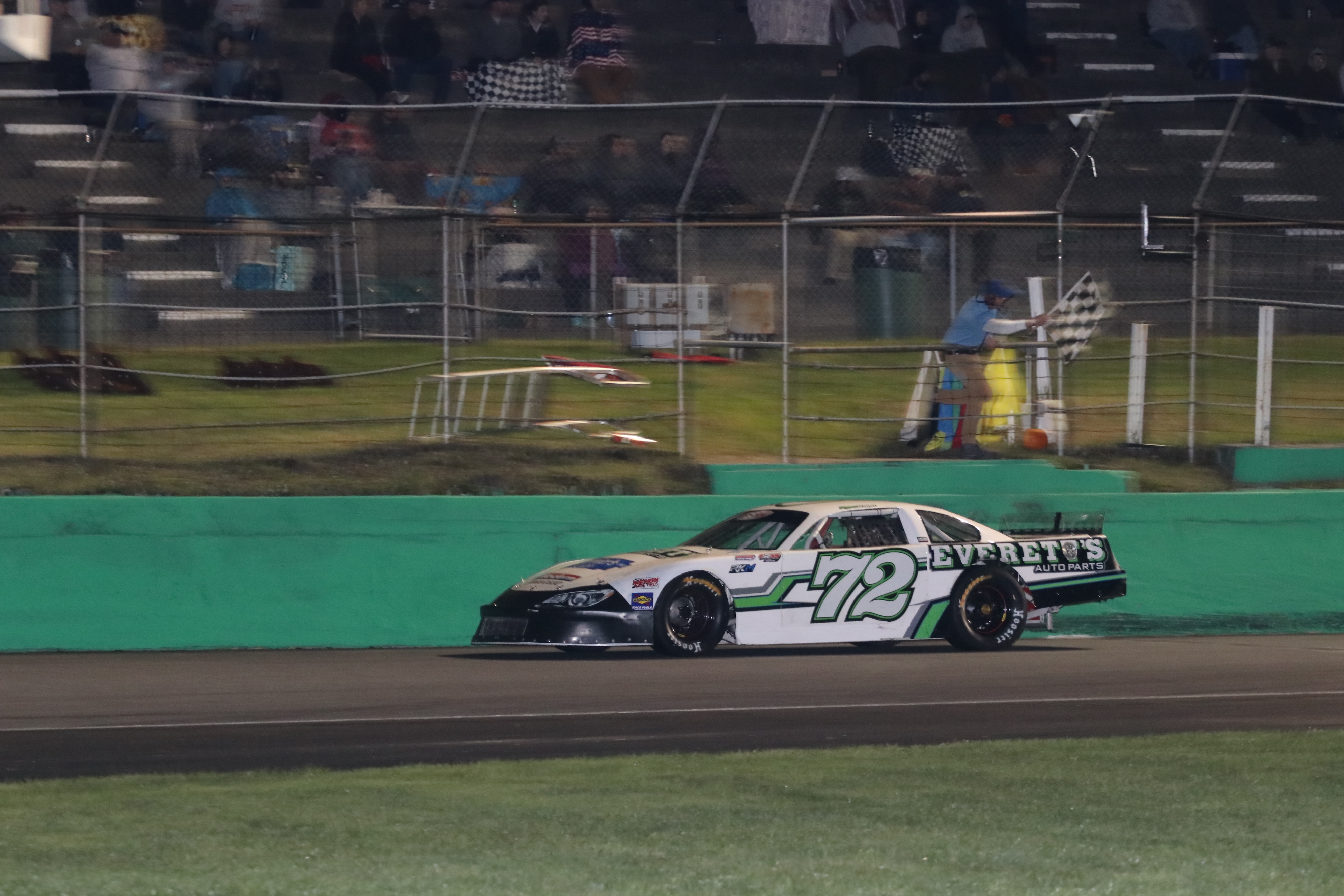 After Dan Brown won the qualifying heat race, Spencer Vaughn and Alex Ricker took the Kennebec Equipment PASS Modified field down to green for their 40 lap main event. As Vaughn quickly grabbed the early lead, he had a rearview mirror full of Spencer Morse. Morse tried the outside and inside of Vaughn before tackling the lead with a crossover move in turn four on lap 13. The first caution flag would wave on lap 24 for the spinning Brandon Varney stopped on the turn three apron.

On the restart Vaughn got the early jump on Morse before the inside line proved faster for the #34 and Morse took back the lead coming off of turn two. The one true caution of the feature would come on lap 32 as Bill Fiske went spinning in turn one and collected Kennebec Equipment PASS Modified point leader Garrett Lamb with him. Both would rejoin the field. On the final restart, both Vaughn and Morse were dead even at the line, but the backstretch was a totally different story. Under the checkered flag Spencer Morse would take the win followed by Spencer Morse for second and Alex Ricker coming home third.

By lap 17, Sanborn used the inside lane to overtake Therrien before Cookson used the same move to steal away the lead on lap 29. Over the next sixty laps the field spread out as Cookson sliced through lap traffic while D.J. Shaw, MacDonald, Ryan Kuhn and Gabe Brown kept pace behind the leader. Scott McDaniel would fall out of the race on lap 95 as his rear end went haywire, sending him pit-side under the black flag.

On lap 104 the battle for second overheated and boiled over. As D.J. Shaw moved around Eddie MacDonald to steal away second, MacDonald made contact with Shaw. The pair went flying into the turn one barrier with MacDonald ending his run early. The first restart of the event would pit Cookson and Kuhn against each other with Cookson snagging the lead back once again. Meanwhile, Gabe Brown slid underneath Kuhn to steal second and set his sights on the top spot.

On lap 109, Brown would officially take the lead as Cookson took hold of second. The second yellow would fly on lap 134 as Jimmy Renfrew Jr.’s right front expired. On the restart Cookson and Brown would faceoff once again with Kuhn waiting in the cat-bird seat. With five laps remaining Cookson slid under Brown, moving the #50 machine to take the lead. Brown, unhappy with the move, retaliated in turn four, sending the Cookson machine around off his front bumper. Both would restart at the tail of the field.

On the final restart, Ryan Kuhn would drag race fellow youngster Jake Matheson under the green flag. With Kuhn gaining the advantage, Trevor Sanborn followed him on the inside groove to take second leaving Matheson to duke out the final podium spot with Joe Pastore. Ryan Kuhn would take down his first career Thunder Road victory followed by Trevor Sanborn in second and Joe Pastore stealing away third after hard contact with Matheson at the line.

The return of the New England Supermodified Series (NESS) brought back the lightning fast speeds and ground thrashing power for the second time at Thunder Road in 2022. After winning his heat, the #25 of Dan Bowes set a blistering pace at the front, leaving his competition in the dust. Bowes would pull a half-a-track lead by lap 10 and began slicing lap traffic by lap 15. Unfortunately, it didn’t last. Attempting to motor around the lapped car of Dan Conners, Conners moved up on the backstretch and sent Bowes hard into the backstretch wall ending his strongest run to date in the NESS Series.

Following the clean-up, Ben Seitz and Rob Summers led the field back to green but no-one stood a chance against Seitz. Ben Seitz would take down his first New England Supermodified Series win followed by Rob Summers in second and Matt Swanson in third.

The White Mountain Motorsports Park Ammonoosuc Asphalt Mini Late Models would round out the night after Garrett Labounty and Chris Judd took down the heat race wins to qualify into the front row of the $1,000 to win feature. Former North East Mini Stock Tour champion Emerson Cayer would take the lead by lap 5 around Labounty with Matt Sonnhalter in tow. The roles were quickly reversed with Sonnhalter taking the lead on lap 7. The lone caution would fly on lap 22 for the spinning and stopped Taber Andrews and Matt LeBlanc in the backstretch grass.

Under the restart, Sonnhalter once again led Cayer as Desmond Skillings and Nick Anderson battled for second. Skillings day would worsen still with a lap 36 spin sending him into the infield grass but remained moving, keeping the field under green. Matt Sonnhalter would take down his second Ammonoosuc Asphalt Mini Late Model win of the year followed by Emerson Cayer for second and White Mountain champion Nick Anderson for third.

Saturday night will feature the Thunder Road Go-Karts on the infield along with band Vinyl Spell and Bonfire in the Turn Three and new VIP Parking Areas.