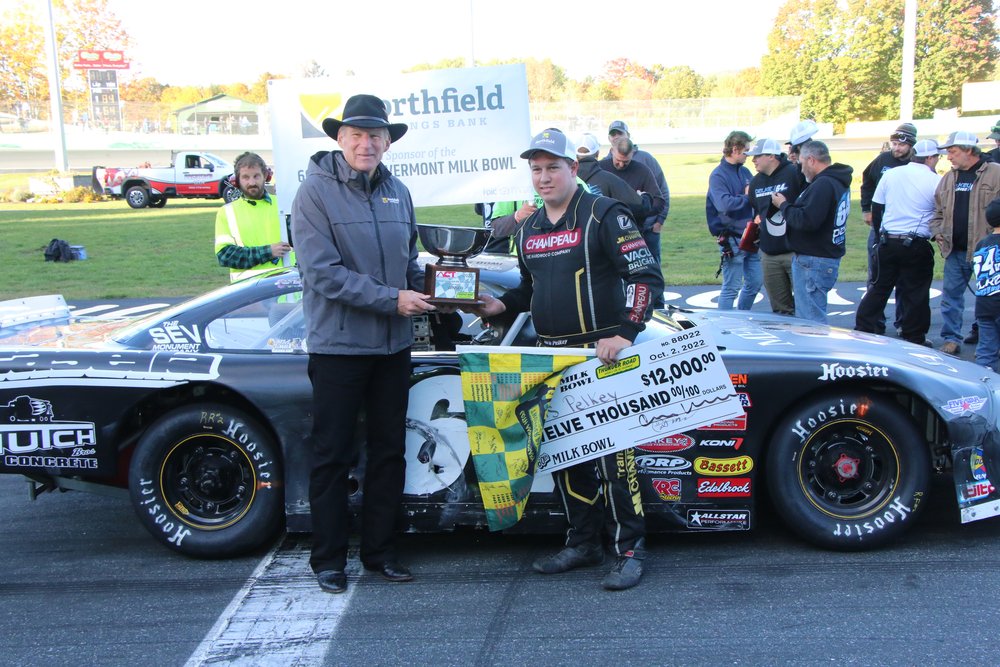 Barre, VT- It’s been a banner season for Christopher Pelkey. Pelkey added another banner on Sunday, picking up his first career Milk Bowl win on the heels of his first ever Thunder Road track championship. The win came with a chance to kiss a cow, and a $12,000 check for Pelkey, but it also cemented his legacy as having one of the best seasons at Thunder Road in recent memory.

Pelkey won the pole during Saturday’s time trials, but early in segment one, he looked like he might struggle on race day, as he faded back as far as fourth in the early running of the first 50-lap segment.

Looks proved deceiving, however, as he charged to the front in the waning laps of segment one to take the win and the advantage heading into the next two segments. In segment two Pelkey had a hard time getting out of the middle of the pack, and struggled to a 17th place finish. His 18 points tied him with Kaiden Fisher for fourth in the overall trailing Scott Dragon’s 14 points and 17 apiece for Jason Corliss and Jimmy Hebert.

In segment three, Pelkey mounted a charge to the front around the outside

“I just raced it like I usually race,” he said. “Took my time and took the spots when I could get them. The outside was good, but tough too, so you kind of had to wait for the pace to drop off a little bit, and when they slowed down enough I could get to the outside and go. We had a couple of timely cautions that helped too.”

Hebert looked to steal the win late as he stalked Pelkey late in the final segment. Hebert had moved up to seventh with Pelkey in fourth, but when Joey Polewarczyk and Patrick LaPerle got together in front of Pelkey and both drifted high, he was able to pick them both off and move to third with under 10 laps to go in the segment. Hebert was able to get around Polewarczyk late, but it wasn’t enough, as Pelkey finished third in the segment to grab the overall win by one point.

Pelkey said the moment when Laperle and Polewarczyk left the opening for him, he had to take advantage. Especially since Derrick O’Donnell was fighting for the lead and he didn’t know who was ahead in the overall between the two of them.

“Yea, there’s no lifting in the third segment of the Milk Bowl,” Pelkey joked. “I felt like I left some spots out there in the second (segment) so I was a little mad at myself and I didn’t want to be thinking all winter about what I should’ve done. So I had to send it.”

Although Hebert hoped to steal the win, he said it was hard to be overly disappointed with a second-place finish in a race that he has traditionally struggled in.

“Second sucks, but all in all it was a pretty good day for us,” Hebert said. “We gave it our all. In the second segment, I had a pretty good lead on those guys and that last restart kind of killed me. It drew me back two or three spots and it cost me. But, you know, we’ve never been close to winning one of these. We’ve actually struggled at Thunder Road for a while and we’ve had a hard time finishing the Milk Bowl.”

Hebert restarted in 12th position on the outside with just seven laps left in segment two, and was dragged back a bit, finishing the stage in 15th seven laps later, and that ultimately did him in.

Derrick O’Donnell entered the final segment as a bit of a longshot, entering the segment with 22 points to put him in a 4-way tie for 12th. He said he knew he had to win the final stage to have any chance, and he did just that, but he ultimately came up a few points shy of the win, settling for third place.

“We knew we had our work cut out for us going into the first segment,” O’Donnell said. “WE had a bad day yesterday and had to start mid-pack. Had a good first segment and got up to fourth. We knew we had to win the third one to even have a shot at it so we went out there and tried to do that.”

Part of O’Donnell’s downfall came during the second segment where he and Marcel Gravel spun after making contact with one another on lap 12. As a result both went to the rear and O’Donnell was only able to recover to 18th in the segment.
“We had to keep it pointed straight and stay out of everybody’s problems and it didn’t really work out all day,” O’Donnell said. “It didn’t really work out all day, After that it’s just a matter of staying on the bottom and running our line and trying to keep the wheels on it and have something left at the end.”

Ultimately O’Donnell had just enough to finish third in the overall.

In the Flying Tigers, Logan Powers secured the segment one win on Saturday, and he and Justin Prescott would have a race to remember for the overall win in segment two on Sunday. Prescott seemed to be in the catbird seat early, clearing traffic well before Powers did, and competing for a top ten spot while Powers languished towards the back of pack.

On lap 26 Prescott made a daring 3-wide move to climb into the top 10, but by then Powers had found the high groove and was mounting a charge. Prescott’s aggressive driving would nearly cost him 10 laps later as he tried to muscle his way past Jamon Perry and both cars ended up spinning into the infield. Prescott kept his foot in it, however, and kept driving as Perry came to a stop, drawing the cation, so race officials granted Prescott his spot back.

The restart had Prescott sitting sixth and Powers seventh, but the outside lane moved first. Prescott and Kevin Streeter dueled door to door in front of Powers for several laps, but on the next to last lap Streeter drifted high, allowing Powers to stick his nose in 3-wide. He couldn’t make it stick in turns one and two, but he threw it in coming out of turn four and Streeter and Prescott ended up colliding, sending Prescott into the wall. As Prescott bounced off the wall, Powers slid up and the two hit coming to the line, Powers spun sideways across Prescott’s nose and crossed the line sideways ahead of him as they both hit the wall again.

Although his car was mangled (another car came through and hit it after the checkers) Powers said he was thrilled to pick up his first win of the season in the biggest race.

“When I saw him and (Perry) get together I thought, ‘I’m sitting pretty good.’ I thought they would send him to the back after contact like that, but they put him back up there. At that point I had the inside and thought I was pretty safe. He made a run out of it up top. We came out of four three wide and from there we made contact. He was in the wall, I was in the wall, then unfortunately at the end, what really killed the car was another car with no brakes came and it hit me in the rear. It got substantial damage so it’s a tough way to take it. I walked away with the trophy and ultimately that’s what matters.”

Powers said Sunday was only his second win driving a Flying Tiger and it couldn’t have come at a better time as his car was painted with a Ralph Baldwin throwback paint scheme, and much of Baldwin’s family was up from North Carolina to cheer him on.

On Saturday Powers said he would be happy with his weekend even if he couldn’t back up Saturday’s segment win. But having Baldwin’s family there and earning the win made it even more special to him.

“Seeing their reactions. Seeing how happy it made them made this even better,” he said. “This is only my second win in a Tiger, and to do it here with that throwback on the car – I said it yesterday but I think someone was riding along with me.

Saturday afternoon Luke Powers won segment one of the Street Stock Milk Bowl race over but on Sunday he needed a little help when Tommy Smith was the first top five finisher from segment one to move toward the front of the pack. Smith, who finished fourth in segment one, was up to eighth place by lap 11, but that was about the time that Peters got free of slower traffic and started a march of his own. Smith’s car lost power on lap 15, however, and with that took away any remaining drama. Peters won with just seven points between the two segments, while Dean Switser (11 points), Justin Blakely (15 points), Smith (15 points) and Taylor Hoar (15 points) rounded out the top five.

“This feels great,” Peters said. “I’m glad I came and made a great run. It’s great to be here.”

Peters had never won a race entering the weekend, so he said he would have been satisfied with winning Saturday’s segment, but to win the overall for his first race win ever was even more special.

“I don’t think a lot of people do that,” Peters said of having a win at the Milk Bowl be their first win. “That means a lot. It’s a nice way to end the season and it gives us a head start on next year.”

The Road Warriors were in action for both segments of their mini Milk Bowl on Sunday afternoon as well, and Fred Fleury made a dramatic late segment pass of Taylor Sayers to steal second away at the stripe. Ultimately, however, that second became a segment win when Carson Theroux, who had crossed the line first was disqualified in post race tech inspection.

Sayers and Fleury would duke it out again in segment two, though this time a bit further back in the pack. Fleury got around Sayers early, but Sayers squeaked back past him on lap 16 of the 20 lap segment, and that one spot was good enough for the win on a tiebreaker.

“This was a hell of a way to end the season,” said Sayers, who also picked up a Second place finish in Saturday’s Strictly Mini event. “I probably won’t be back full time next year, so this was a nice way to end the full time racing. I can’t wait to eat my cereal out of this bowl (shaped trophy) tomorrow.”