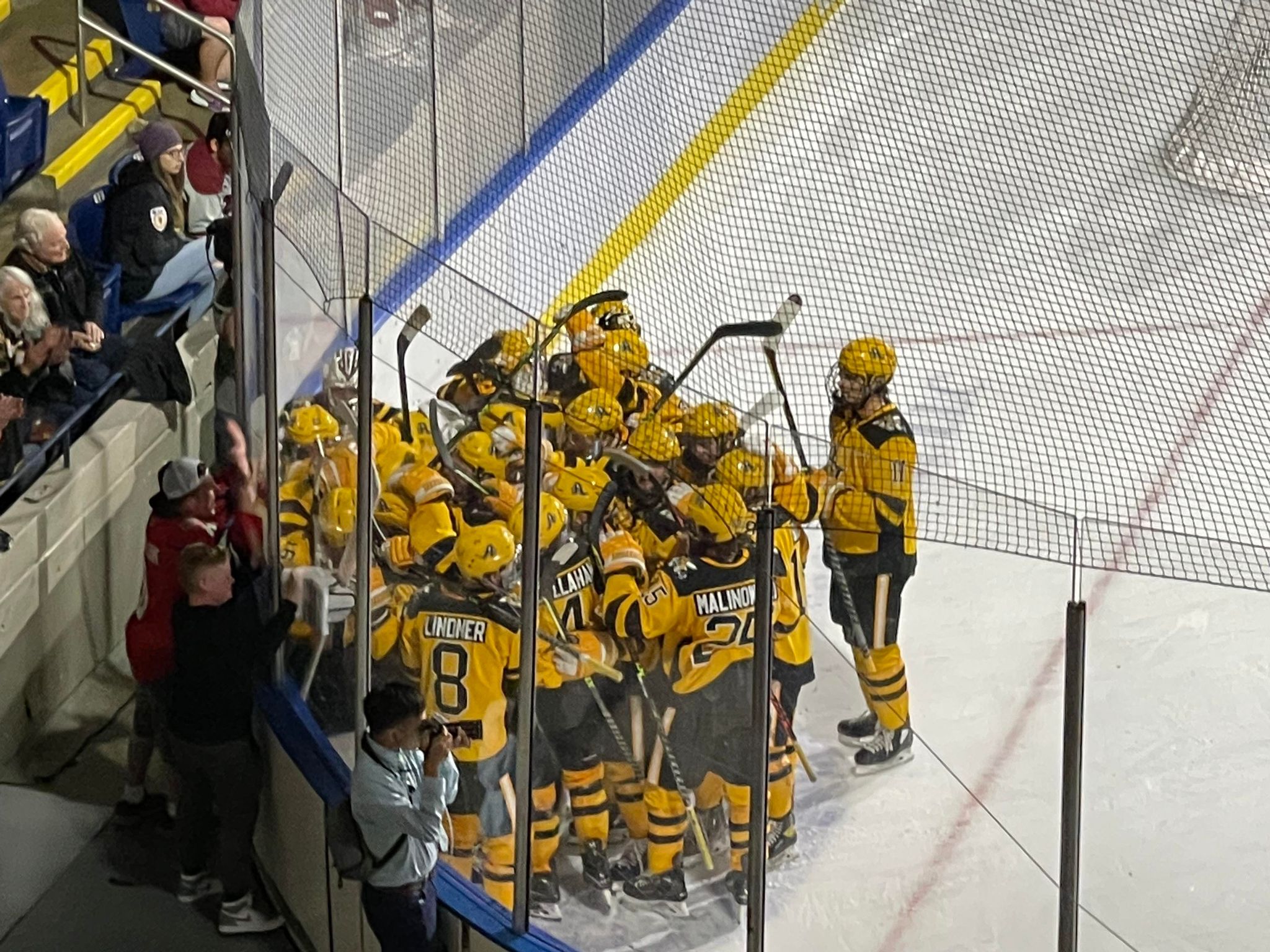 Story and Photo By Zander Manning

SPRINGFIELD – Coming off of a split against the University of Alaska-Fairbanks, the American International College hockey team looked to right the ship and pick up their first regulation win against the #13 University of Massachusetts on Saturday night at the MassMutual Center.

With the lead at 2-0 Yellowjackets (0-1-2) in front with less than six minutes left in the third period, the Minutemen (0-0-1) rallied with two late (and quick) goals to tie the game at two goals apiece, coming off the sticks of Josh Nodler and Reed Lebster, respectively less than a minute apart.

Five minutes later, both teams promptly headed to overtime a short time thereafter. No team gave in in the extra stanza, however, and they headed to a shootout.

Both teams wound up with a 2-2 tie. AIC, however, topped UMass in a three-round shootout by a score of 3-2.

“I’m very encouraged about what we saw, I really feel like we got better as the game went on,” AIC head coach Eric Lang said. “We knew we had to get puck out a bunch of ways, the power play was good, and the penalty kill continued to show their worth. We were disappointed they couldn’t nail it up and get third goal [and win in regulation].”

Coach Lang said he didn’t want to treat it as a moral victory, but is treating every game like a game seven. He categorized his squad as at 25% capacity; but, reiterated that he was very happy with the team’s performance.

The first period was very evenly matched with neither team giving an inch and holding each other scoreless, and even keeping each other in check with both teams notching 11 shots on goal.

The biggest chances for both teams came early in the period, the first came for UMass (0-0-0) when Cal Kiefiuk missed a nearly wide open net less than a minute into the game, but AIC (0-1-1) goaltender Jarrett Fiske kicked it aside.

After being held off the short board for the first five minutes, the Yellowjackets got two in a hurry, one in a similar situation to Kiefiuk’s. On the Yellowjackets’ second shot on goal, Oscar Geschwind got into the blue paint, but was unable to take advantage when Minutemen goaltender Luke Pavicich denied him with a clutch pad save.

In the second period, however, AIC brought their A-game defensively, with the Yellowjackets only allowing five shots on goal, while collecting 10 of their own.

“[Coming into the second period] we made a couple of adjustments,” Lang said. “Our breakouts were not as simple as other teams… We have to find better ways to do that, play more direct, play with two hands on our sticks.”

Both teams traded power play chances, but neither team was able to capitalize on any of them.

With 7:23 to go in the second period, Alexander Malinowski picked up a rebound and quickly wristed it on net. Much to his chagrin, however, Pavicich made the glove stop keeping it scoreless.

AIC finally got its reprieve later in the period, and after 38 minutes of scoreless hockey, Blake Bennett broke the scoreless tie on an unassisted breakaway slap shot goal from the right face-off circle – his first of the season.

“We did get frustrated at times,” Jordan Biro said of the absence of goals. “But we knew things were gonna go our way.”

Just over seven minutes into the third period, Oscar Geschwind accounted for the second Yellowjackets goal, making it 2-0 on a tip-in goal off a perfect feed by Dustin Manz at the face off circle.

Fiske is still in search of his first regulation win this season after getting two shootout wins. In spite of this, however, Fiske was happy with how his team performed.

“Our guys did an outstanding job,” Fiske said. “We would’ve rather got it done in regulation, but we got it done.”

Up next AIC will travel to Lewiston, N.Y. to take on Atlantic Hockey conference-rival Niagara University. Puck drop is slated for 7:00 p.m.