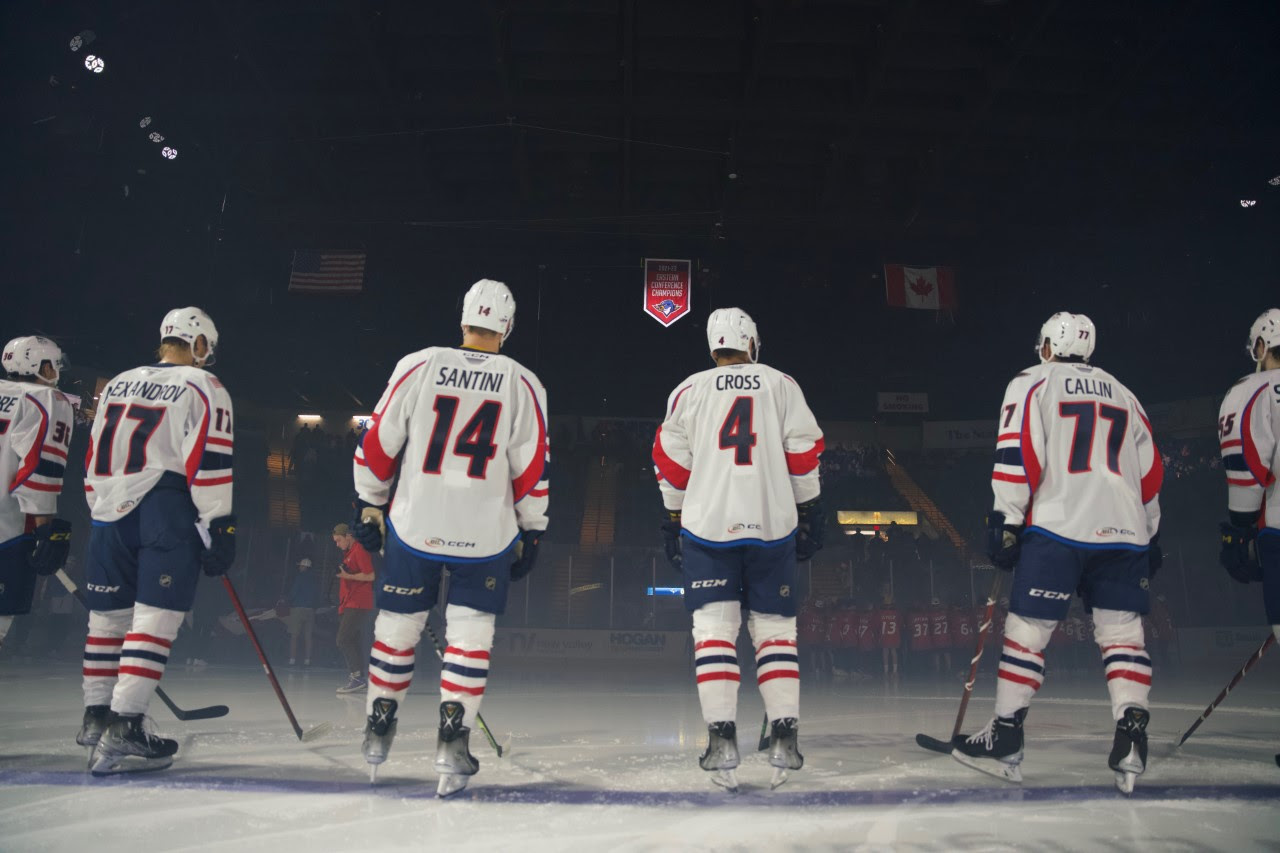 SPRINGFIELD, Mass. – Thunderbirds saw a banner reflective of achievement lift to the rafters, but Islanders escape with a 3-2 win on Opening Night.
The Springfield Thunderbirds (0-1-0-0) have officially begun another perennial season, but now comes the challenge of being the hunter and the prey. It is well-established that the Thunderbirds are the reigning Eastern Conference
Champions, but soon the puck drops, and the whistle blows. The slate will be reset, ushering a new season in. However, Springfield has contained most of its nucleus from its postseason run, but growing pains may be a lingering
factor as the season progresses.

“I thought earlier on our execution wasn’t very good, and we did look young, and nervous” said Springfield Thunderbirds Head Coach Drew Bannister.

“You know you could see it a bit, but as the game progressed we got better, but some plays in the first period were unnecessary, and soft plays were in effect.”

The Bridgeport Islanders have struggled at the Thunderdome.  Islanders Head Coach Brent Thompson gave his thoughts about the team winning at the MassMutual Center on Saturday night.

” Springfield is a great hockey team. They obviously went to the (Calder Cup) Finals last year. Well coached, intense hard working team and I thought we matched their work ethic. We knew it was going to be a war in this building. There is a lot of positives we can pull from this but it’s just game two so we want to learn from this and build.” Islanders Head Coach Brent Thompson Said

” I still think we need to get to that point. I don’t think were at a place where were happy right now as far as the consistent 60 minutes in a hockey game. That was last night (Friday night). Tonight we were fortunate enough to get the two points but still need to be better.”

” I feel we have a really good team this year. Were pretty confident in the guys returning. A lot of guys coming back and some young guys stepping up in the lineup. I think we feel strong about our talent level. Last night (Friday), we sort of had two bad minutes that put us down 3-0 and we really outplayed them so I think we felt we deserved better and that if we played liked that for an entire game, we would be in better shape. We had a few breakdowns and given a few chances but overall I think we dictated most of the night. Got to a lead and I thought in the third (period) we played really well. We didn’t collapse.” Schneider Said

As the game went on it felt the Thunderbirds started to find their footing and momentum, but this team’s identity is still fresh and waiting to develop, however, Coach Drew Bannister noticed the pieces are in place most importantly
after Bridgeport scored the third goal.

“I think guys have a great opportunity to earn playing time, because that window is going to close soon when we get some players back, and I hope they are taking advantages of the opportunities”.

Still, the T-birds do have a lot to forward to as the season progresses, and this new roster looks to build chemistry. One player who took advantage of the proverbial moment was Mathias Laferriere who had a big game, by scoring a
powerplay goal, and making his presence felt on the ice when his number was called.

“I mean it’s a different position for him moving from the wing to center, and he’s only probably played center a total of three times, and Laferriere works well when he is moving his feet, and he needs to keep earning his opportunity as a
young player.”

Coach Bannister’s comments do feel he was impressed by his team’s effort, but he wishes that his team could execute better, and keep better control of the puck, while taking chances, and creating chances when a lane opens
up. Springfield started strong out of the gate, but Bridgeport revealed they were no pushover through precise forechecking that gave off the impression the Thunderbirds were being smothered to where the point where not even
the crowd’s momentum couldn’t even salvage a breath of relief. The Islanders got the scoring affair going early when a bad turnover occurred outside Joel Hofer’s doorstep. Hudson Fasching fed Otto Koivula a simple backhand that
found its way into Hofer’s net.It was clear Springfield struggled for a time by allowing miscues to arise and going silent on the game’s first power
play, courtesy of a Samuel Bolduc interference call. Which felt like it was going to the much-needed jolt of energy the T-birds were struggling to find. Bridgeport continued its offensive assault when Ruslan Iskhakov deked his way
through the legs of a motionless Dmitri Samurukov and then fired off a simple wrister that would extend the Islander’s lead to 2-0.After 20 mins of play, the Thunderdome was left speechless, seeing the score currently stand at 2-0 Islanders. The shots on goal were 10 to 4 in favor of the islanders.

Bridgeport started the second with a clear mindset: just execute the game plan and stay physical, especially playing with the lead. Within mere seconds of the period, Chris Terry gathered a quick turnover after a bad transition which
evolved into a quick wrister, causing Springfield to step back and question if they should match the physicality stemming from the Islander’s bench.

” He’s an elite scorer in this league and his hockey brain and compete level is always there.” Thompson Said

For a time, the T-Birds were plagued with bad stick play, struggling to find open lanes, till Nikita Alexandrov found Matthew Highmore in stride, where Highmore then blanked Cory Schenider with a wrister from the right circle, allowing Springfield to get on the board at 3-1, and Joel Hofer once again stepped up, and gave his team a chance to win.

“Listen he’s a great goalie, and when you see somebody make saves like that” said Thunderbirds left-winger Matthew Highmore.

“To hold you in a game where you are tiering, where you need a big save or a big play. It comes down to helping the guy out, but he’s off to a great start this year, and we are happy to have him.”

Highmore’s comments reflect the integrity and character this locker room displays on a daily basis, and it feels it will only be a matter of time before the chemistry begins to manifest. The home team’s offense didn’t slow down because, minutes later, Chris Terry found his way to the Penalty Box after a high-sticking double minor. The Thunderbirds then looked to capitalize through a Mathias Lafernie top-shelf wrister, all setup and put into motion by Nikita Alexandrov and Matt Kessel who recorded a few helpers on the sequence—allowing the Thunderbirds to cut Bridgeport’s lead by 3-2. The second dwindled to a close as both
exchanged multiple penalties, and established physicality could be a leading factor heading into the final frame of this matchup.

The final frame didn’t contain much, Joel Hofer stepped up and gave his team a chance to stay in this game, and the crowd’s energy started to build organically, and a few penalties were called, and opportunities were present, but Bridgeport stood strong with it’s forecheck and causing pressure, which allowed the Islanders to escape Springfield with a 3-2 victory and let them gain their first win. Now the T-birds could notice a clear picture centered around the
strengths, and weaknesses this team possesses. However the message in the locker room is it was only the first game, and they look to improve.
Matthew Highmore’s comments perfectly wrap up the message when this team hit’s the ice “It’s only game 1 there are 71 more”.

The T-Birds and the Providence Bruins look to kick off their rivalry in Springfield with a 3:05 Puck drop set for this afternoon at the MassMutual Center. The Bruins are coming off a 3-1 victory in their home opener on Friday night against the Bridgeport Islanders.  Bruins goaltender Keith Kinkaid made 42 saves.