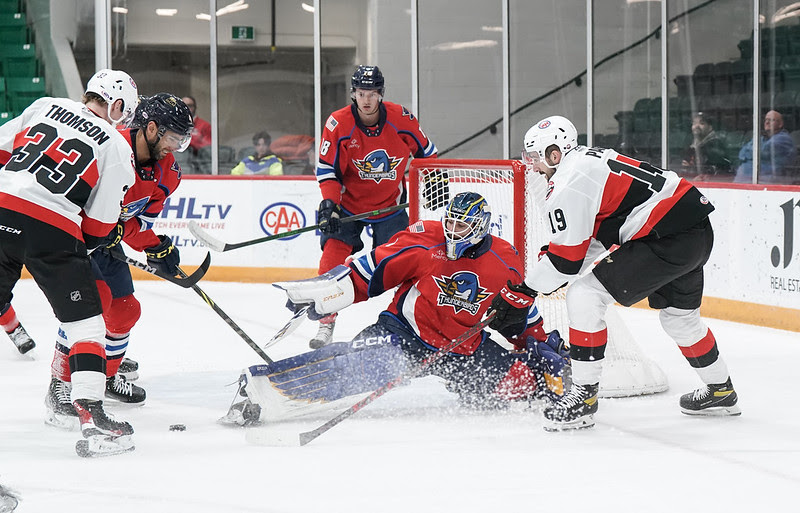 Press Release from the Springfield Thunderbirds

BELLEVILLE, Ont. – The Springfield Thunderbirds (1-3-0-0) received outstanding goaltending from their first-year netminder in a 5-2 win over the Belleville Senators (2-1-1-0) on Friday night at CAA Arena in Belleville.

After failing to take a lead in their first three games, the Thunderbirds changed their fortunes in Belleville with an opportunistic penalty kill at the 7:40 mark. Will Bitten began a 2-on-1 rush against a forward, dipping the shoulder on the left wing to cut near the front of the goal, but rather than shoot, Bitten bought time for Hugh McGing to join him on the rush, and McGing cranked home a one-time cannon through Antoine Bibeau to make it 1-0 Springfield on McGing’s first goal and Bitten’s first point of the season.

Bitten would not be finished, either, as the Ottawa native got into the scoring act at 14:31 as he opened up in the left-wing circle, faking as if he would pass the puck rink-wide and sliding a shot under Bibeau’s legs to give Springfield a 2-0 lead.

At the back end, Vadim Zherenko’s AHL debut started favorably, with the young Russian denying 11 first-period attempts from the Senators. Belleville would finally crack the first-year goalie in the second on a man advantage, as Lassi Thomson moved up from the blue line, cutting in front on his backhand to shuffle the puck past Zherenko at 4:49 of the second, making it a 2-1 game. Zherenko bounced back, though, and made a phenomenal lurching save on Matt Wedman from point-blank range to keep the score 2-1.

Moments later, Springfield had a reply to restore their cushion, as Greg Printz deflected a neutral zone puck in on the right-wing side to Drew Callin, who powered his way to the crease and slipped a forehander through Bibeau’s five-hole to make it a 3-1 game at 6:03. That came just moments after Anthony Angello had his potential first goal as a T-Bird thwarted by Bibeau on a breakaway forehander.

The Senators still refused to relent, though, killing four separate Thunderbirds power plays in the second, and Cole Reinhardt added his fifth point in four games with a strike at 11:31 to once again cut the Springfield lead down to a single goal at 3-2.

Reinhardt’s next bid in the final minute of the period was a shorthanded breakaway with a chance to tie the score, but Zherenko stayed with him to grab a backhand try in the mitt, keeping the lead secure into the dressing room.

Belleville’s power play was presented a golden opportunity to tie the score when McGing was whistled for a four-minute high-stick double minor just 1:45 into the final period, but Egor Sokolov negated that advantage by taking a slashing minor less than a minute later.

With 4-on-4 hockey ensuing, Springfield took advantage of open ice as Tyler Tucker gathered in a loose puck after getting an initial shot blocked near the point. He navigated into the left circle and found a lane to pass it diagonally to a waiting Nathan Todd in the blue paint. Todd tapped it into the vacant goal to make it a 4-2 score at 3:06.

Things would not be simple for the T-Birds, as Martin Frk joined McGing in the box to give Belleville a 5-on-3 for just over a minute. Zherenko and Tucker made sure Belleville would not get any closer, as the pair combined to block away just about every Senators chance. Once Springfield survived the threat, they were able to coast to the finish line with Todd adding an empty-net goal for good measure with 4:02 to play.

Springfield and Belleville reconvene at 7:05 p.m. on Saturday for the final game of the back-to-back set.  The T-Birds will return to the MassMutual Center on Friday, Oct. 28 as they host the Bridgeport Islanders in a rematch of Opening Night before welcoming back the Bruins for a 7:05 p.m. rematch on Saturday, Oct. 29. Thunderbirds fans can reserve their seats for the 2022-23 season and lock in the best prices and member benefits by calling (413) 739-GOAL (4625) or visiting www.SpringfieldThunderbirds.com.