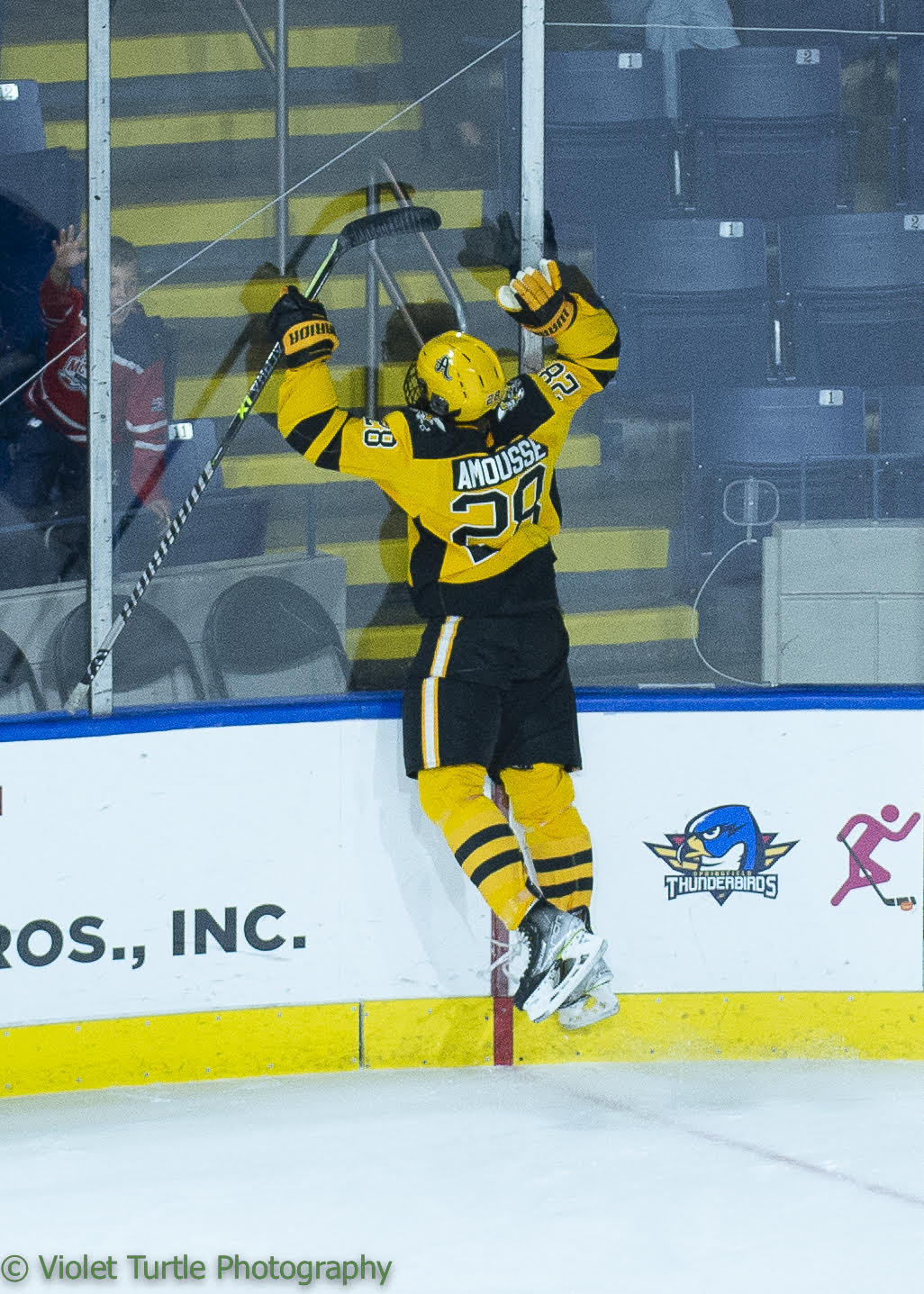 SPRINGFIELD, MA-  The AIC Yellow Jackets were able to put Tuesday night behind them as they were able to score a 5-0 victory against the Lindenwood Lions on Saturday night. Yellow Jacket goaltender Alexandros Aslandis earned the shutout with 16 saves

” We were really concerned about making sure that we took Tuesday and we try and converted what should be a high end effort today.  I thought our guys were business like. I thought we played with that urgency that you need to win college hockey games.” AIC Head Coach Eric Lang Said

” That was huge for us. We had a rough night Tuesday. It was a long week looking forward to this one. We proved to ourselves that was a mistake on Tuesday and we’re gonna grow from it and not let us hold back.” AIC Senior Blake Bennett Said

” The game finished in two hours so that was a positive. Our goaltender was average. It was a team we played against that was well-prepared. Angry from the night before. It was a team that I had watched all summer because it is a team that is so well coached. It’s perfect to emulate. What this coach does with the program and the players that he has. That’s why they win the Atlantic. That’s why they give everybody else in turn a hard, hard game. My players weren’t ready to  be disciplined and play a hard, hard game because were immature and its too early in the season. It’s not so much what they did even though that they’re really good. Its what we do and I was very dissatisfied from all our goaltender all the way out. ” Lindenwood Lions Head Coach Rick Zamba Said

AIC would get a 5-on-3 power play early in the first period as Lindenwood was called for too many men on the ice and then former Yellow Jacket player Hunter Johannes was called for a five-minute major for contact to the head and a game misconduct. Lang and AIC Senior Blake Bennett gave their thoughts.

” I love Hunter and he’s a really good player. I am very happy for his success over at Lindenwood. I am sure he was probably a little more emotional. You know what those things happen.  I just don’t like that part of the game like targeting a guys head. I think were trying to move away from that stuff in our sport and I am not saying Hunter certainly targeted his head. There’s just no room for it.” Lang Said

” Hunts is a good kid. Nothing bad to say about him. He was one of my roommates last year. I wish the best for him over at Lindenwood.” Bennett Said

AIC would convert on the 5-on-3 power play as Nicholas Cardelli fired the shot to make it 1-0 with 14:41 remaining in the first period.  Luis Linder and Brian Kramer would be credited with the assists.

Andrew Amousse would score his first college goal on a 2-on-1 with the help from Blake Bennett to make it 2-0.

” It means a lot. First college goal always going to remember it. It’s really good I am done with that. Keep going and play hard.” Amousse Said

” That was a good feeling, especially being a part of it. I was able to give him the pass. That was really proud being a senior and giving a freshman his first goal.” Bennett Said

Bennett would add a goal in the second period to make it 3-0 with 15:02 remaining.

Jordan Biro fired the wrist shot 1:04 into the third period to make it 4-0 for the Yellow Jackets.

Alexander Malinowski tipped in a shot from Matt Rickard to make it 5-0 after AIC received another 5:00 power play

” Going into the game talent-wise, were immature no matter who we play with.  Whether we play AIC, or Bentley next weekend.”

The weekend series will wrap up this afternoon at the MassMutual Center. Zombo will probably have to make some changes going into the game this afternoon as two players could be out for the game.

” I have two players that are potentially DQed (disqualified) so those become easy. They didn’t do anything anyway. Whether I am the bad guy or the rules are the bad guy. Those are easy changes. You can’t start the game. We only got six defensemen which means four are sitting on the bench with too many men on the ice against a really strong team. You don’t start five minutes in a game shorthanded. Then we got a returning player that is beyond carelessless and that’s put us in a hole.” Zamba Said

” We got to go bed tonight with a hunger in our belly to be able to come back and do this again.