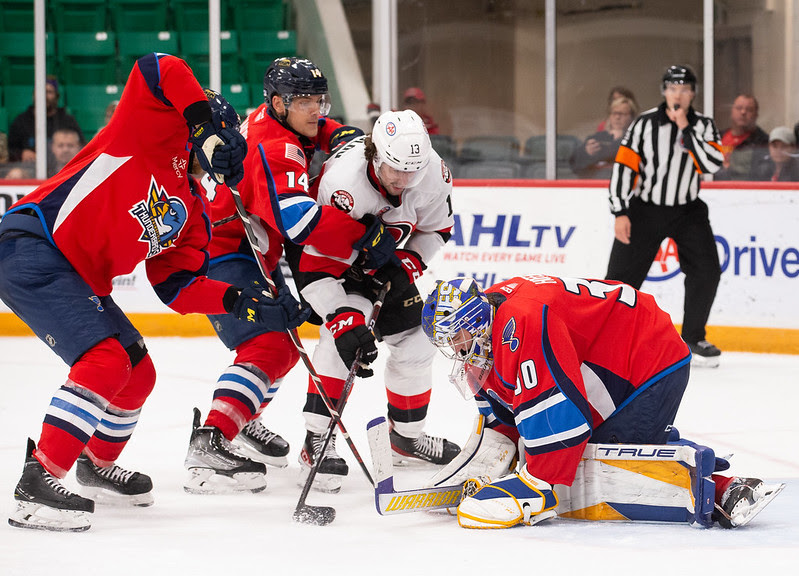 Press Release from the Springfield Thunderbirds

BELLEVILLE, Ont. – The Springfield Thunderbirds (2-3-0-0) played a diligent defensive game to earn a second straight victory, 3-2 over the Belleville Senators (2-2-1-0) on Saturday night at CAA Arena in Belleville.

Springfield jumped right out of the gates, and Matthew Highmore got behind the defense for a breakaway before the game even had 10 seconds of elapsed time. Unfortunately for Highmore, Belleville netminder Kevin Mandolese was ready from the get-go, stoning the winger with an arm save to prevent an early lead for the visitors.

However, Highmore’s efforts would not be in vain, as the Thunderbirds’ hot start continued anyhow, culminating in a goal by Nathan Todd from the blue paint at the 3:39 mark off a slick criss-crossing rush by Martin Frk and Nikita Alexandrov. For a second straight night, Springfield earned the first goal and a 1-0 lead.

Belleville’s power play could only strike once on six chances on Friday, but they took advantage of their first crack on Saturday, as Jake Lucchini was in the right place at the right time to tie the score, 1-1, at the 6:20 mark. Viktor Lodin tried to filter a puck into the top of the crease from the right circle, but his pass veered off a T-Birds stick toward the left corner glass. Lucchini happened to rotate that direction, fielded the errant puck, and fired it home past Joel Hofer before the Springfield goalie could close the gap.

Springfield’s man advantage continued to undergo some early season pains, failing to strike on two chances including a first-minute power play drawn by Highmore, and then they were unable to strike with a minute to work with to begin period two.

Nevertheless, the even-strength and shorthanded units picked up the slack, and after dishing out a shorthanded assist on Friday, Will Bitten was on the receiving end of a breakaway pass from Hugh McGing on Saturday, as he beat Mandolese down low to give the T-Birds the 2-1 lead at 9:29 of the middle frame.

Just 4:04 later, back at even strength, defenseman Dmitri Samorukov joined the scoring for the first time as a T-Bird, working a lovely criss-cross with Highmore before roofing a wrist shot short-side from the right circle to make it 3-1 for Springfield after 40 minutes.

The Senators cut the lead back down to a single goal when Jayce Hawryluk set up a shot by Lucchini at 10:41 of the third. Hofer made the initial denial, but Dillon Heatherington crept up to the crease and poked the loose puck across the line to make it a 3-2 contest.

From there, however, the Senators would not get any closer as Hofer and his defense had an answer the rest of the way, allowing Springfield to escape Canada with two wins on the three-game trip north of the border. Hofer finished with 22 saves for his first win of 2022-23.

The T-Birds will return to the MassMutual Center on Friday, Oct. 28 as they host the Bridgeport Islanders in a rematch of Opening Night before welcoming back the Bruins for a 7:05 p.m. rematch on Saturday, Oct. 29. Thunderbirds fans can reserve their seats for the 2022-23 season and lock in the best prices and member benefits by calling (413) 739-GOAL (4625) or visiting www.SpringfieldThunderbirds.com.