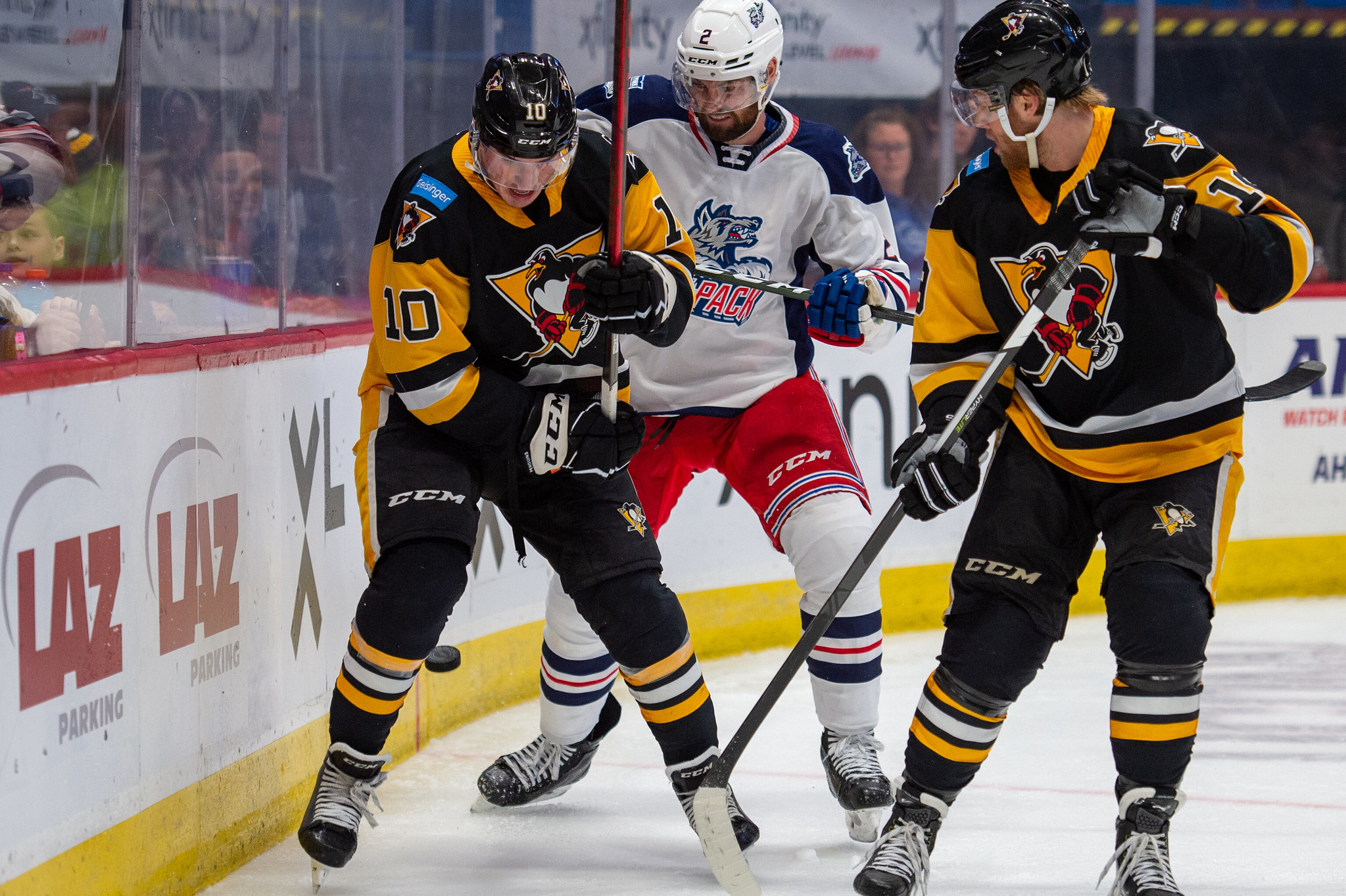 HARTFORD, CT – The Hartford Wolf Pack faced their largest hole of the early season on Saturday night in their home opener at the XL Center. Trailing 3-0 to the Wilkes-Barre/Scranton Penguins midway through the contest, the Pack battled back to earn a point. Unfortunately, their bid for a huge early season comeback victory came up just short as the club dropped a 4-3 shootout decision to the Penguins.

Alex Nylander, who scored in the second period, was the lone shooter to find twine in the skills competition. Nylander weaved his way towards the Hartford goal, going backhand-to-forehand before stuffing the puck past a sprawled out Louis Domingue. Filip Lindberg would deny Tim Gettinger in the top half of the third round to secure the victory.

For the third time in as many games, the Wolf Pack would surrender the first goal of the contest. Corey Andonovski scored his first career professional goal 17:30 into the first period, perfectly deflecting a Ty Smith shot by Domingue. The goal gave Smith three assists in four games, and also gave Tyler Sikura his first assist with the Penguins.

The second period would see the Penguins extend the lead to 3-0 with two quick goals. First, at 4:37, Nylander potted his second of the season. Drew O’Connor fed Nylander the puck just outside the Hartford zone, then veteran forward gained the offensive end with possession. Nylander worked his way to the top of the near faceoff circle, where he ripped home the goal to make it 2-0.

The second insurance marker would come off a turnover. Matthew Robertson sent a pass to the Penguin blueline that was intercepted by Jon Lizotte. Lizotte quickly sent a backhand pass to Filip Hallander, who skated in on a breakaway and beat Domingue for his first of the season.

Hartford answered back at 15:32, cutting into the deficit with a powerplay goal. Julien Gauthier found a loose puck in the slot area, quickly gained possession, and released a shot that beat Lindberg for his second of the season.

The Wolf Pack powerplay wasn’t done, as on their very next attempt they’d cut the lead to just one. 3:58 into the third period, C.J. Smith netted his first with the Wolf Pack. Smith took a pass from Robertson and positioned himself directly on the dot of the near faceoff circle. Smith rifled a wrist shot that cleanly beat Lindberg over his glove.

The Wolf Pack penalty kill would be tested, forced to kill off penalties to Ty Emberson and Jonny Brodzinski to keep the spread at 3-2. Finally, with momentum firmly on their side, the Wolf Pack struck again. Smith sniped home his second of the game at 17:23 to force overtime and secure a point for the Pack.

Overtime featured solid chances both ways, but Domingue and Lindberg were up to the task. Both netminders made four saves in the extra frame, sending us to the shootout.

There, Nylander scored in the bottom of the second, while Gettinger was denied giving the Penguins the extra point on this night.

The Wolf Pack return to the ice tomorrow when they visit the Bridgeport Islanders. Puck drop is set for 3:00 p.m. and you can see the game live on AHLTV and listen for free on Mixlr.

The Pack will take the ice at the XL Center again next Friday night, when they host the Hershey Bears. $2 beers and $1 hot dogs on every Friday night home game returns for the 2022-23 season! To get tickets, visit www.hartfordwolfpack.com.