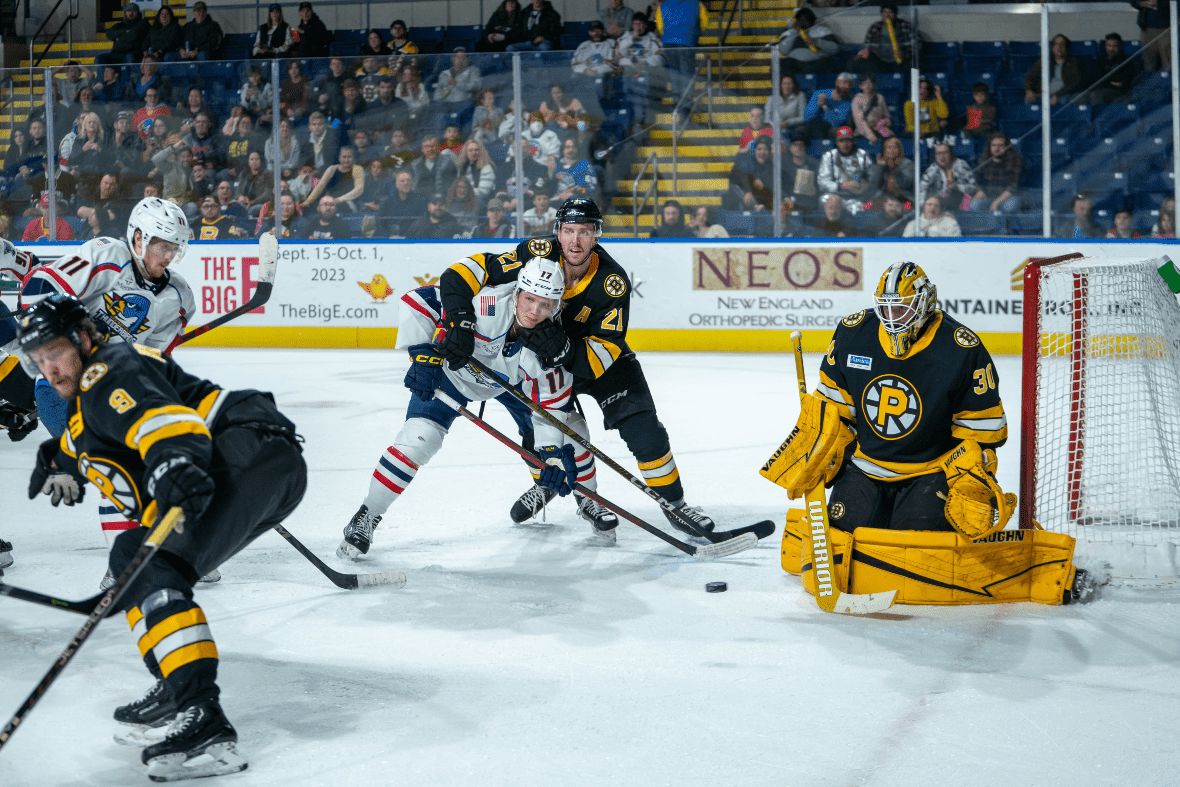 SPRINGFIELD, MA-  Providence Bruins forward Vinni Lettieri tied the game as he connected with the one-timer with 28.1 seconds left and would score the lone goal in the shootout as they defeated the Springfield Thunderbirds Saturday night at the MassMutual Center 4-3

” We just stayed in there. We battled hard. Our goalie played great. He got hit a couple of times. He just hung in there. Made a lot of great saves. We ended on top which was huge for us.” Lettieri Said

” We started out a little slow. They came out a little hot. I think we were resilient in the end, Battled to the end. Credit to their goalie where could’ve been a few more for us and a regulation win but he made some pretty big saves.” Bruins goaltender Keith Kinkaid said

” It didn’t stop. I think it’s a testament to the characters we have in the room. We have really strong leadership. From a coaching perspective, it makes things easy. We don’t have to bark at them. We make a lot of young mistakes at times Our goalies have been excellent. We just kept at it. I thought in overtime. We played really well.” Bruins Head Coach Ryan Mougenel Said

The Thunderbirds for the fourth game in a row would take the lead early as Matthew Highmore missed the shot. Highmore would then find Bitten as he made the backhand pass and Bitten used the snapshot to make it 1-0 at 4:16 into the opening period.

Matthew Highmore extended the lead for the Thunderbirds 14 seconds into the second period as he used the backhand and he went five-hole to make it 2-0.

The Bruins however would erase the lead at the 2:23 mark of the second when John Beecher put the puck past Vadim Zherenko to make it 2-1.

Luke Toporowski tied the game with 3:10 remaining in the second period for the Bruins to make it 2-2.

Nathan Todd scored and retook the lead for the Thunderbirds as he used the one-timer with the pass from Brady Lyle with 1:17 remaining in the second period.

Lettieri and the Bruins responded and took advantage of the power play as Lettieri fired the one-timer with 28.1 seconds left to tie the game at 3-3.

Lettieri would used the forehand to score the lone goal in the shootout for the Bruins to win the game.

These two teams will play again this afternoon in Providence. Bruins forward Lettieri said they will pretty much focus on their game and move on to the game this afternoon

” I am sure they are going to want to get back at us. Even out the series. We have a great group of guys so we’re not worried.” Kinkaid Said

Puck drop is at 3:05 p.m. The Thunderbirds will return to action at the MassMutual Center this upcoming Friday where it’s the renewal of the I-91 rivalry as they take on the Hartford Wolf Pack.  Puck drop will be at 7:05 p.m.