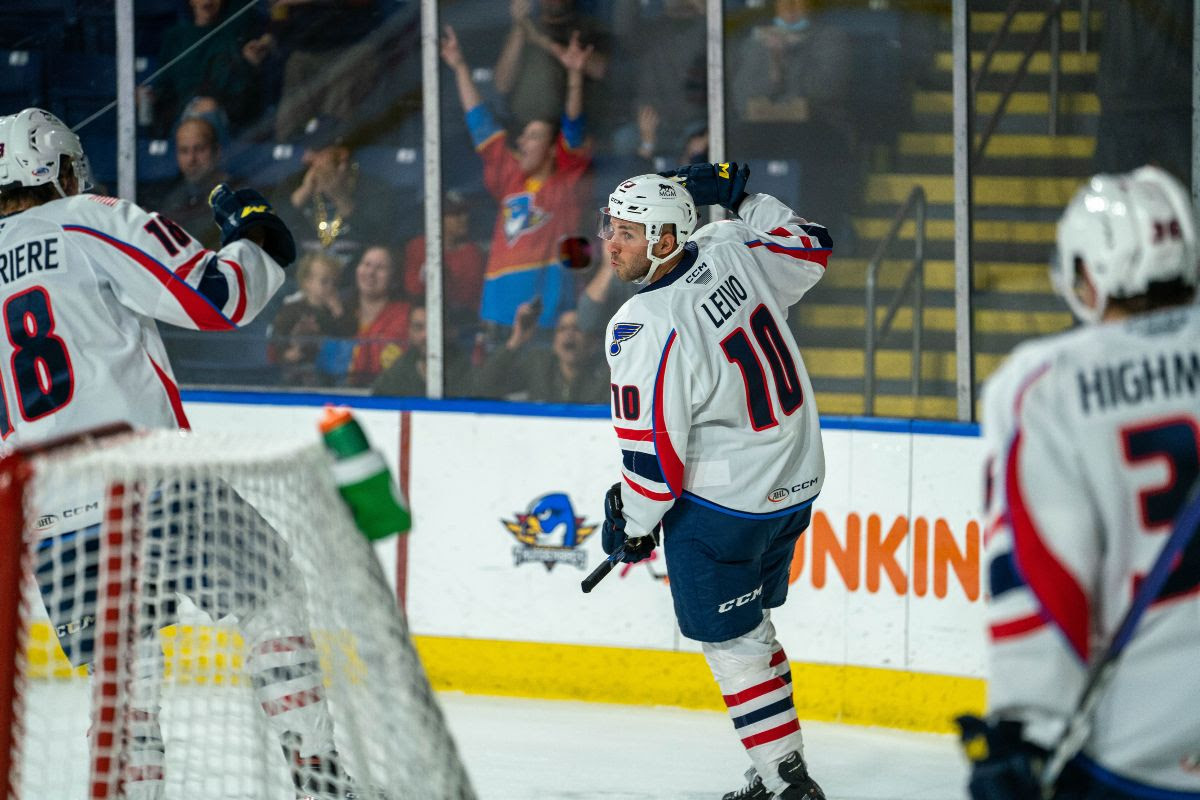 ” That adds depth obviously to our lineup and our Top six (forwards). Pushes a player down and gives us depth in our bottom six (forwards). Overall it just helps the whole of the team and our group of forwards.” Thunderbirds Head Coach Drew Bannister Said

Matt Kessel got the Thunderbirds on the board when Martin Frk made the saucer pass to him. Kessel took advantage and fired the shot over the glove of Wolf Pack goaltender Louie Domingue with 8:26 remaining in the first period to make it 1-0.

Will Bitten extended the lead for the Thunderbirds with 4:02 remaining in the first period as he scored his third shorthanded goal of the season and he took the shot from the right and beat Domingue glove side to make it 2-0.  The goal was unassisted.

” I think our penalty kill really got us through that first period. It could’ve went the other way really quickly if we weren’t doing a good job and if Joel (Hofer) didn’t make the saves he had to in the first period. We didn’t want to have to do that but certainly Will (Bitten) going into last year. We got him. We weren’t sure what we got. Obviously, he’s come in and earned a spot in this lineup and he’s an important part of our team. We saw what he did last year for us in the regular season and into the playoffs and now he comes here and continues to play well.” Bannister Said

Josh Leivo scored his first as a Thunderbird as Matthew Highmore took the puck from and found Levio. Leivo used the snapshot to make it 3-0. with 3:25 remaining in the first period to make it 3-0.

Leivo would waste no time scoring in the second period as he went on an odd-man rush with Mathias Laferriere. Leivo was able to use the wrist shot to make it 4-0 44 seconds into the second period.

Turner Elson would put an end to Hofer’s shutout bid as used a screen to beat Hofer to make it 4-1 with 11:26 remaining in regulation.

Hofer would try to score his second goal as he fired the shot up high but was blocked.  Leivo would then score the empty-net goal for the hat-trick with 2:03 remaining in regulation to make it 5-1.

The Thunderbirds would take on the Providence Bruins tonight for the third in a week. The Thunderbirds have now collected five wins out of their last six games and a point in all six of those games.  Thunderbirds Head Coach Drew Bannister and goaltender Joel Hofer gave their thoughts about tonight’s game.

” Good hockey team and try to continue to moving forward.  Obviously, we kind of put a string of wins together. I think we still got a little bit more to go. I think we’re in a good position where if we can start playing a little bit better away from the puck and certainly stay out of the box. We can start winning a lot of games here. Certainly, there is some chemistry that we want to build with our forwards. Playing 5-on-5 hockey that’s the best way to do it.  They’re a good hockey team and they’re big and strong. It’s going to be a good test for us tomorrow.” Bannister Said

” They’re obviously going to be good. We know what to expect from them. They’re a big heavy team. Will be ready to go from the drop of the puck.” Hofer Said

Puck drop for tonight’s game at the MassMutual Center will be at 7:05 p.m.