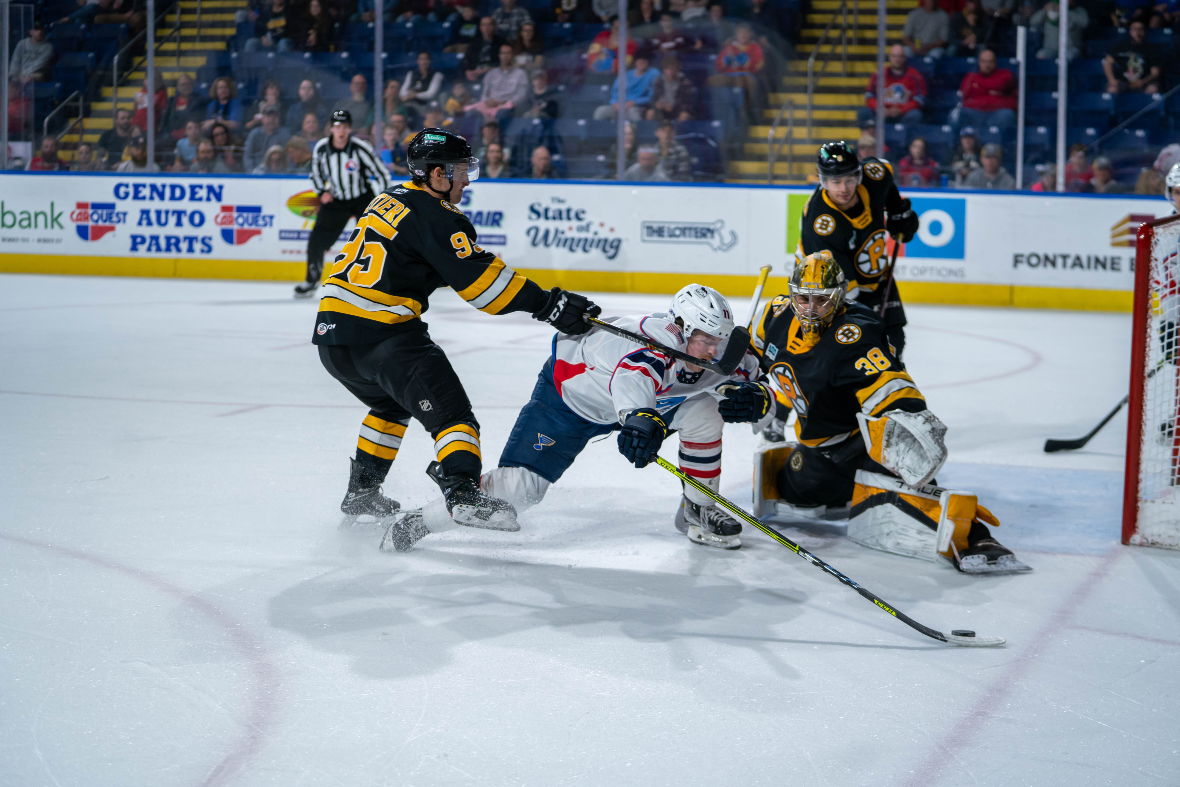 ” I think it showed a lot. Big penalty kill at the end. A lot of guys stepped up. They needed to step up. You get a goal from (Joey) Abate which is a bonus but the one thing with this team is they compete and they play with tons of courage. It was great to see Bussi go in there and get the win. I thought coming in a difficult situation. He did an awesome job.” Bruins Head Coach Ryan Mougenel Said

Bruins prospect Fabian Lysell got his team on the board on a breakaway when he scored 1:44 into the opening period when he beat Thunderbirds goaltender Vadim Zherenko.

Bruins goaltender Kyle Keyser was injured in the first period after getting into a collision with teammate Vinni Lettieri. Keyser left the game with a lower-body injury.  Brandon Bussi would come into the game in place of Keyser.

Luke Toporowski tied the game for the Bruins as he tipped in a shot from Kai Wissman to tie the game at 2-2 at the 3:00 mark of the second period.

” It’s something we’ve been working on in practice and was just kind of a little muscle memory. Beat the guy to the puck and I knew I was going upstairs with it.” Bruins forward Joey Abate Said

Bussi made 25 saves in relief of Kyle Keyser.

” Just feels good to help the team in any way I can. It’s been a pretty wacky week.” Bussi Said

Bussi and the Bruins shutout the Islanders on Sunday in Bridgeport.

The Thunderbirds will begin a three-game road trip tonight at the XL Center in Hartford. The T-Birds defeated the Wolf Pack 5-1 on Friday night at the MassMutual Center. The Thunderbirds will continue their trip to Pennsylvania against the Lehigh Valley Phantoms and then conclude the road trip on Saturday against the Wilkes-Barre/Scranton Penguins.

The Thunderbirds will then return to home ice at the MassMutual Center for a five-game homestand beginning on Wednesday, November 16 against the Syracuse Crunch with the school day game beginning at 10:35 a.m.