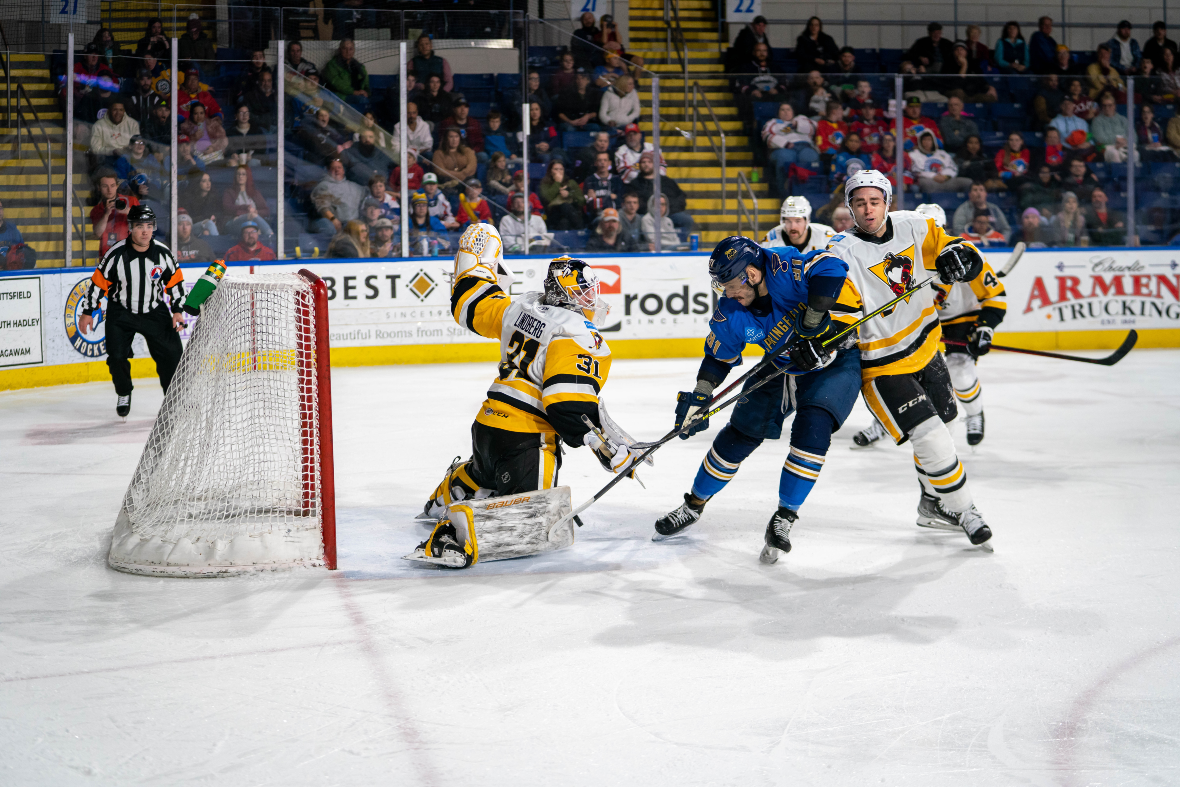 SPRINGFIELD, MA-  Sam Poulin had a goal in regulation along with a goal in the shootout as the Wilkes-Barre/Scranton Penguins defeated the Springfield Thunderbirds 3-2 at the MassMutual Center.

” We had a lot of games in a short amount of time. Think the boys were a little bit tired. We found a way to win. That’s what’s important.” Penguins forward Sam Poulin Said

” It was gusty. We had an overtime game and a shootout last night Long travel. Come in and find our legs later. First period was tough. That’s a good team. Can’t say enough of how we stuck with it.” Penguins Head Coach J.D. Forrest Said

Hugh McGing got the Thunderbirds on the board late in the first period as he used the backhand with 37.7 seconds remaining to make it 1-0.

The Penguins did not go away quietly in the second period as Ty Smith took the one-timer.  Sam Poulin was able to respond and got the piece of the timer that would beat Thunderbirds goaltender Joel Hofer to even the score at 1-1 with 6:29 remaining in the second period.

The Thunderbirds would get a power play in the second period and respond. Martin Frk made the pass to Jake Neighbours for the one-timer. Will Bitten went to the blue paint and Bitten was able to put the puck in the back of the net with 2.7 seconds remaining in the second period to make it 2-1.

The Penguins tied the game late in the third period as Valtteri Puustinen was able to outskate a Thunderbird defender and used the forehand shot to go five-hole to beat Hofer with 3:05 remaining in regulation to tie the score at 2-2.

The game could not be settled into overtime so it was onto the shootout Dmitri Samorukov was able to score the lone goal for the Thunderbirds while Alex Nylander and Sam Poulin were able to score goals in the shootout to win the game for the Penguins.