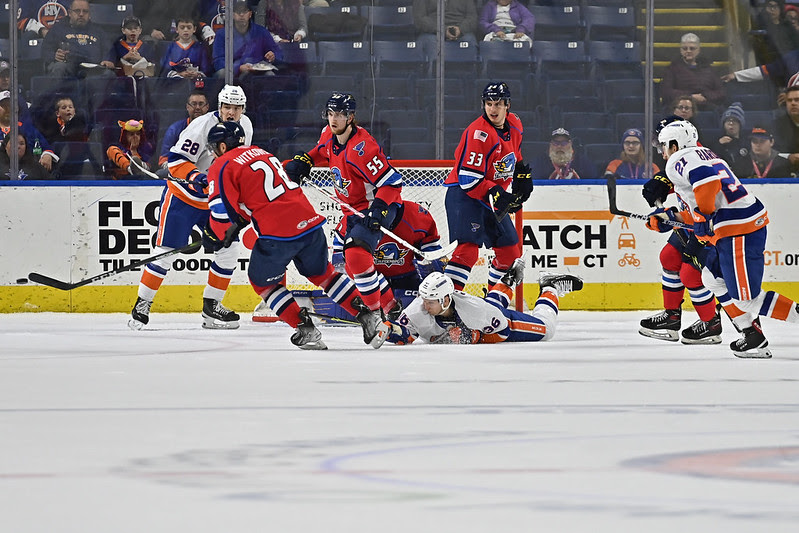 BRIDGEPORT, CT- The Springfield Thunderbirds had another hard-fought battle this time against the Bridgeport Islanders on Sunday afternoon at Total Mortgage Arena as the T-Birds would lose 6-4.

” It was a playoff atmosphere. I thought the game was intense. Springfield is such a fast team. Offensively gifted. It was a tight fought game. A couple of bounces for us. We capitalized. For me, it came down to the special teams. Power play stepped up big for us.” Islanders Head Coach Brent Thompson Said

Steven Santini scored his first goal of the season for the Thunderbirds as Matthew Highmore shot the one-timer Islanders Cory Schneider. The puck would go near the goal line as Santini was able to put it through to make it 1-0 2:25 into the opening period.

The Islanders responded 31 seconds into the second period as former Thunderbird Paul Thompson went to the net as he deflected a shot from Islanders defenseman Sam Buldoc to even the score at 1-1.

The T-Birds retook the lead over five minutes later as Highmore and Jandric were able to help Martin Frk. Frk used the backhander and scored with 14:25 remaining in the second period to make the score 2-1.

The Islanders however would score three unanswered goals in over five and half minutes. Hudson Fasching used the breakaway and beat T-Birds goaltender Vadim Zherenko to make it 2-2. Aatu Raty gave the lead for the Islanders and was able to put in a rebound to make it 3-2. There would be a delayed penalty against the Thunderbirds but it did not stop Cole Bardreau and the Islanders as they went up by two goals at 4-2 with 7:12 remaining in the second period.

The Thunderbirds would respond in the third period and erase the two-goal deficit as Anthony Angello took the shot with the centering pass from Greg Printz to even the score at 4-4 with 14:23 remaining in regulation.

After Thunderbirds forward, Will Bitten was denied a shorthanded breakaway attempt. The Islanders responded as Andy Andreoff scored on a rebound with 3:05 remaining in regulation to make it 5-4.

The Thunderbirds had one more power play attempt late in the third period but could not capitalize as Cole Bardreau add his second goal of the afternoon with an empty-netter to make it 6-4.