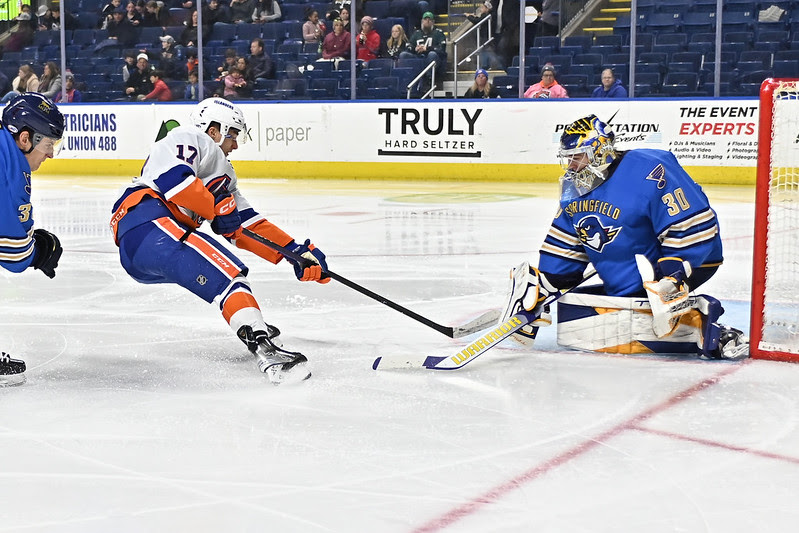 Photo Courtesy of the Bridgeport Islanders

” After last night (Saturday), I thought we played a good hockey game last night and not to come out with any points at all is disappointing. Tonight again I thought our guys competed hard. Got a little bit of puck luck. I thought our PK (Penalty Kill) did really well. Joel (Hofer) was really good in net for us.” Thunderbirds Head Coach Drew Bannister Said

” Two points is what we’ve been kind of so close to in the last two weeks. Confidence booster to kind of close out the way we did. We did a really good job managing the game. Huge win for us.” Thunderbirds forward Matthew Highmore Said

” It’s big. We were in a little bit of a slump there. We’ve been playing pretty good hockey lately. Lost some tight games there at the end. It’s good to get this one.” Thunderbirds goaltender Joel Hofer Said

” Any loss is tough. You’re disappointed with the result. I think the effort was inconsistent. We competed for 60 minutes. I think there was a little lapse in the course of the game. But give credit to Springfield, they played a solid game. They ran on our forecheck. They’re heavy on pucks.” Islanders Coach Brent Thompson Said

The T-Birds got on the scoreboard with 6:32 remaining in the first period as Hugh McGing took the one-timer.  The shot bounced off of Islanders goaltender Jakub Skarek and went to Thunderbirds forward Nikita Alexandrov.  He found Matthew Highmore and Highmore was able to put it in the net to make it 1-0.

Greg Printz got the Thunderbirds an insurance goal in the second period on a delayed penalty call.  Printz used the backhand to score a goal 14 seconds into the third period to make it 2-0.

The Islanders tried to rally back late in the game as Samuel Buldoc fired the slap shot that would end Hofer’s shutout bid with 50 seconds remaining in regulation to make it 2-1.

The Thunderbirds would put an end to the game for the Islanders of a comeback bid as Nikita Alexandrov scored an empty-net goal with a second remaining in regulation to make it 3-1.  It would be his second goal in two of the last three games.

The Thunderbirds will return to home ice this weekend at the MassMutual Center as they will two Western Conference teams for the first time in franchise history. The Grand Rapid Griffins will come to the Thunderdome on Friday and the Milwaukee Admirals will come on Saturday. The puck drop for both games will be at 7:05 p.m.