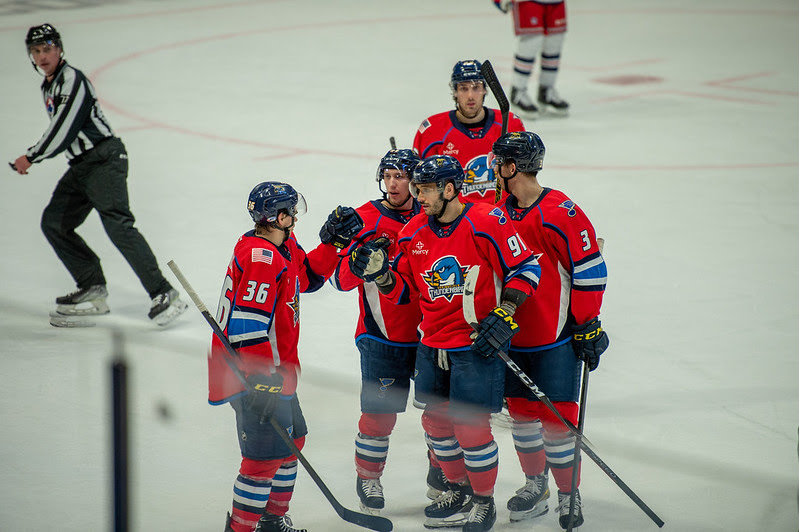 The Wolf Pack got on the board in the opening period as the Thunderbirds gave up a turnover on the power play. Ty Emberson took advantage as he went to the left circle and fired the shot that beat Thunderbirds goaltender Joel Hofer to make it 1-0 with 8:18 remaining in the first period

The Thunderbirds stormed to a three-goal surge in the second period. Mitchell Hoelscher tied the game with 17:07 remaining in the second period as he got the puck from the slot area and used the forehand and took the shot that went through Wolf Pack goaltender Louie Domingue to even the score at 1-1.

The Thunderbirds would take their first lead of the night as Nikita Alexandrov and Will Bitten went on a 2-on-1 rush. Bitten would take the initial shot but it was blocked. Jake Neighbours would take advantage and put in the rebound with the wrist shot to make the score 2-1.

The Thunderbirds would get a power play late in the second period and Marin Frk took advantage.  Frk took the slap shot from the left circle and beat Domingue to make it 3-1.

The Wolf Pack tried to start a comeback as Eberson already tallied a goal early on in the game.  He would make the pass to Gustav Rydahl and Rydahl would score with 16:10 remaining in regulation to make it 3-2.

The Thunderbirds responded with an insurance goal. High McGing used the screen and fired the wrist shot from the left side that would beat Domingue to make it 4-2 with 13:30 remaining in regulation. Tyler Tucker would receive his second assist of the night and Will Bitten received his third assist of the game.

The I-91 rivalry will continue twice this week as the Thunderbirds will host the Wolf Pack at the Thunderdome at the MassMutual Center for a 7:05 p.m. drop of the puck. The Thunderbirds will end the 2022 portion of the schedule at the XL Center on New Year’s Eve on Saturday with the game beginning a 5:30 p.m.