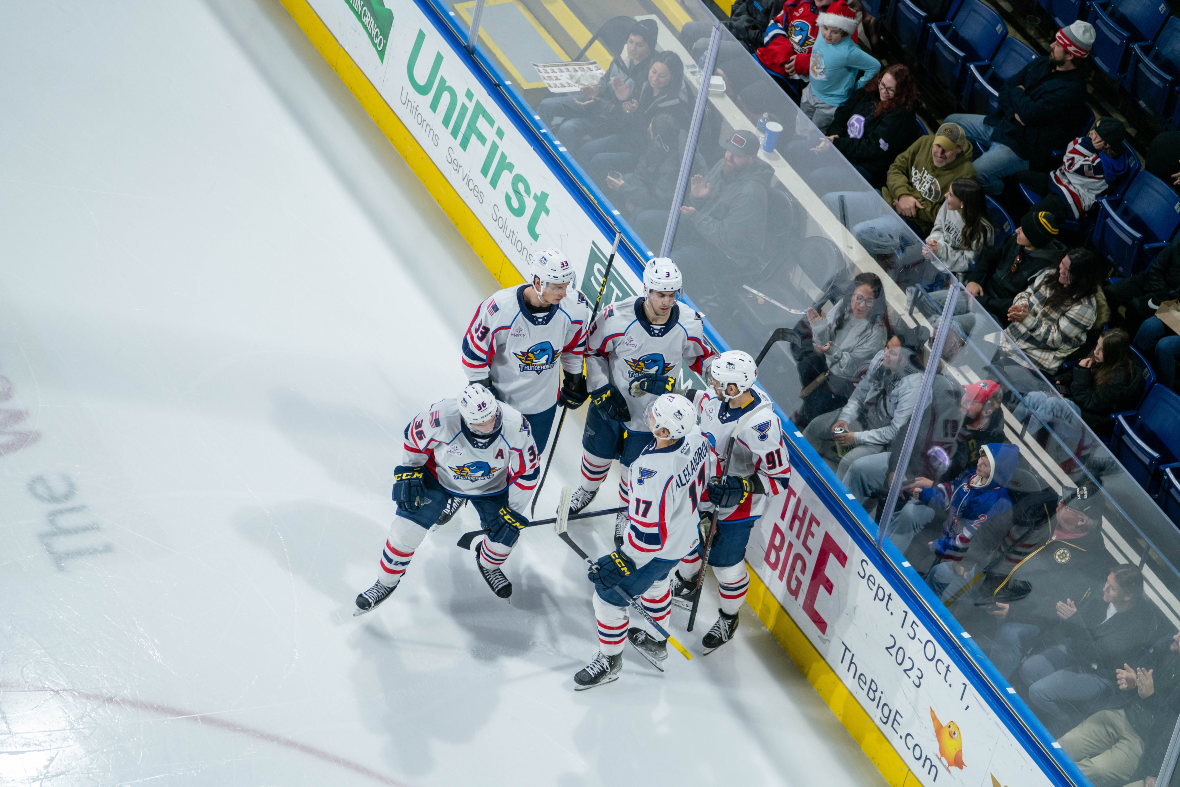 SPRINGFIELD, MA-  The Springfield Thunderbirds scored five goals in the second period on Wednesday night as they defeated the Hartford Wolf Pack 7-4 at the MassMutual Center.

The Wolf Pack would get on the scoreboard first as defenseman Brandon Scalin made the backhand pass to Austin Rueschoff. Rueschoff was able to get the puck past Hofer to make it 1-0 with 7:09 remaining in the first period.

Matthew Highmore would respond for the Thunderbirds 47 seconds later when he intercepted the puck from Cuylle.  Highmore took the wrist shot that went over the glove of Garland to make it 2-1.

Turner Elson extended the lead for the Wolf Pack once again as he beat Hofer on the stick side when he took the pass from Karl Henriksson to make it 3-1 at 3:16 of the second period.

The Thunderbirds would then go on a roll and rally back as they received a 5-on-3 power play when Lauri Pajuniemi was called for a double-minor for high-sticking and Brandon Scalin was called for delay of game when he put the puck over the glass.

Garland would make the initial save off of a shot from Nikita Alexandrov.  Martin Frk was able to put the puck into the open net and score for the Thunderbirds to cut the lead down to 3-2 with 13:12 remaining in the second period.

Will Bitten then made the pass to Mitchell Hoelscher. Hoelscher took the shot and was denied but was able to put in the rebound to even the score at 3-3 with 3:58 remaining in the second period.

The T-Birds would take their first lead of the night and for the rest of the game. Dmitri Samorukov was able to keep the puck and make the pass to Martin Frk. Frk would use the wrist shot and score his second goal of the night to make it 4-3

The Thunderbirds would continue the momentum as goaltender Joel Hofer made the pass to forward Jake Neighbours.  Neighbours skated the puck up the ice as he put it past Garland’s legs with 3.6 seconds left in the second period to make it 5-3.

The Thunderbirds would extend their lead in the third period as Hugh McGing won the faceoff. Will Bitten scored with the one-timer with 14:06 remaining in regulation to extend the lead to 6-3.

Neighbours would score his second goal of the game as he used the snap shot over the glove of Garland to make it 7-3 with 11:34 remaining in regulation.

Ryan Carpenter would score the final game for the Wolf Pack with 10:20 remaining in regulation to make the score 7-4. It would be his sixth goal in three games.

Thunderbirds goaltender Joel Hofer would finish the game with 21 saves in the win.

The Thunderbirds return to action tonight at the Thunderdome at the MassMutual Center against the Bridgeport Islanders.  Game time will be at 7:05 p.m.

The Thunderbirds will then close out their 2022 portion of the schedule when they travel to the XL Center to take on the Wolf Pack tomorrow evening.  Puck drop will be at 5:30 p.m.