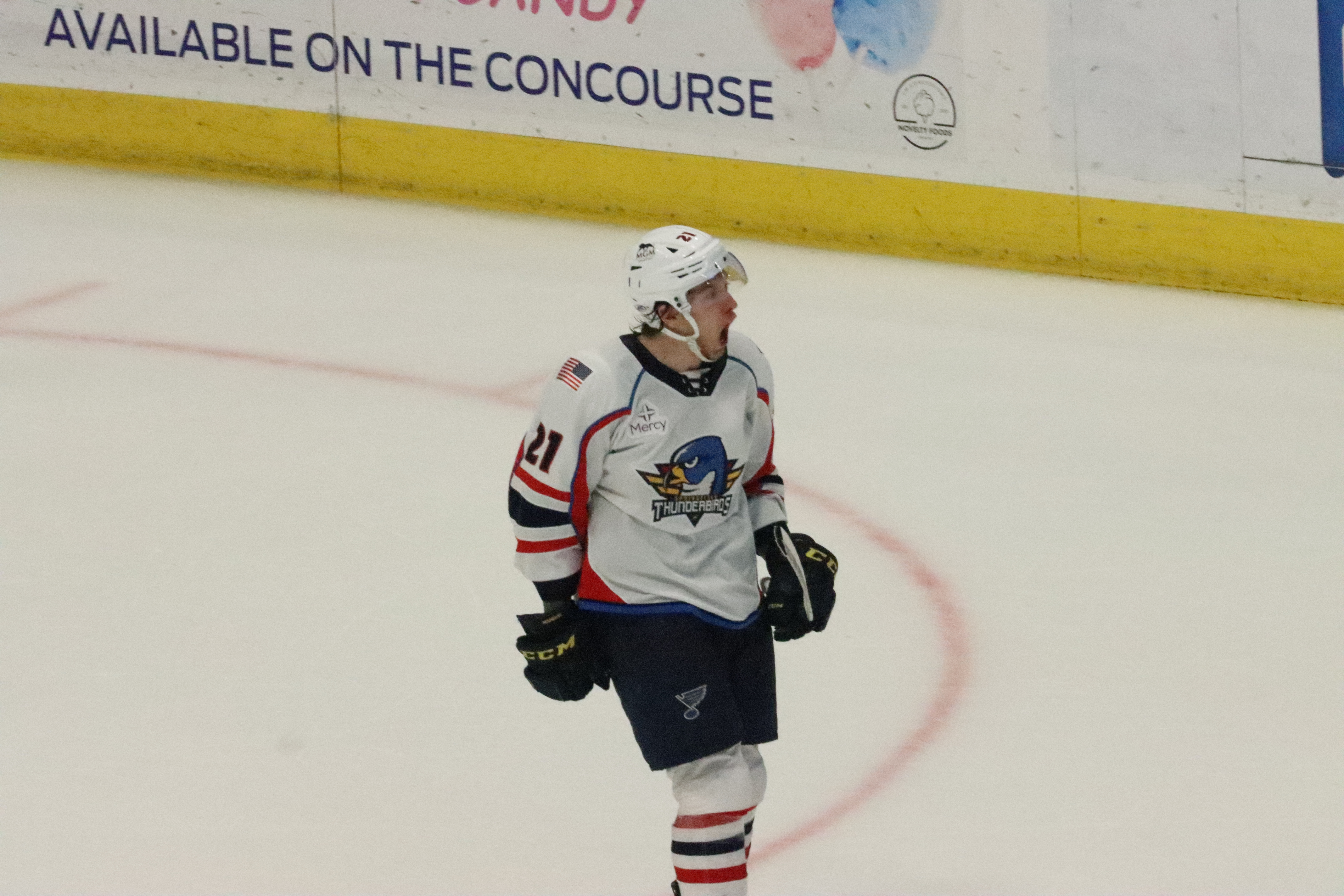 HARTFORD, CT- Thunderbirds forward Jake Neighbours scored the game-winning goal in the shootout for the third time in nine days. They defeated their I-91 rival, the Hartford Wolf Pack 2-1 in a shootout at the XL Center on Saturday evening extending their winning streak to three games.

For the first time in six games, the Thunderbirds were able to score first.  Jake Neighbours found Will Bitten and Bitten was able to beat Wolf Pack goaltender Louie Domingue with the forehand shot through the leg pads to make it 1-0 with 8:41 remaining in the first period.

The T-Birds almost extended the lead to 2-0 as McGing and Bitten went on a 2-on-1 rush. McGing took the shot and went off of Domingue.  Bitten tried to do the wraparound but Wolf Pack defenseman Zac Jones was able to keep the puck from crossing the goal line as the Thunderbirds still led 1-0.

Matthew Robertson tied the game for the Wolf Pack with 11:53 remaining in the second period as he fired the wrist shot that beat Thunderbirds goaltender Joel Hofer to even the score at 1-1.

While both goaltenders made 11 saves in the second period.  Both Hofer and Domingue received roughing minors as they were both run into by their opponents on separate occasions.

There will be no scoring in the third period as the game went into overtime.

Both teams had a scoring opportunity in the overtime period. Domingue made the save for the Wolf Pack on a backdoor play by Thunderbirds defenseman Brady Lyle while Thunderbirds goaltender Joel Hofer made the same save on Wolf Pack forward Tanner Fritz.

The game would not end in overtime so it was onto the shootout.  The Wolf Pack sent out Will Cuylle, Ryan Carpenter, and Zac Jones for the shootout and were all denied.  After two chances in the shootout by Thunderbirds forward Will Bitten and defenseman Brady Lyle.  Jake Neighbours would settle this game and extend the winning streak for the Thunderbirds to three games when he used the forehand and that went through the legs of Domingue to win the game by the final score of 2-1.

The Wolf Pack will head on the road this weekend as they take on the Utica Comets on Friday night and then the Wilkes-Barre/Scranton Penguins on Saturday.

The next home game for the Wolf Pack at the XL Center will be on Saturday, January 14 against the Providence Bruins. The game will begin at 7:00 p.m.