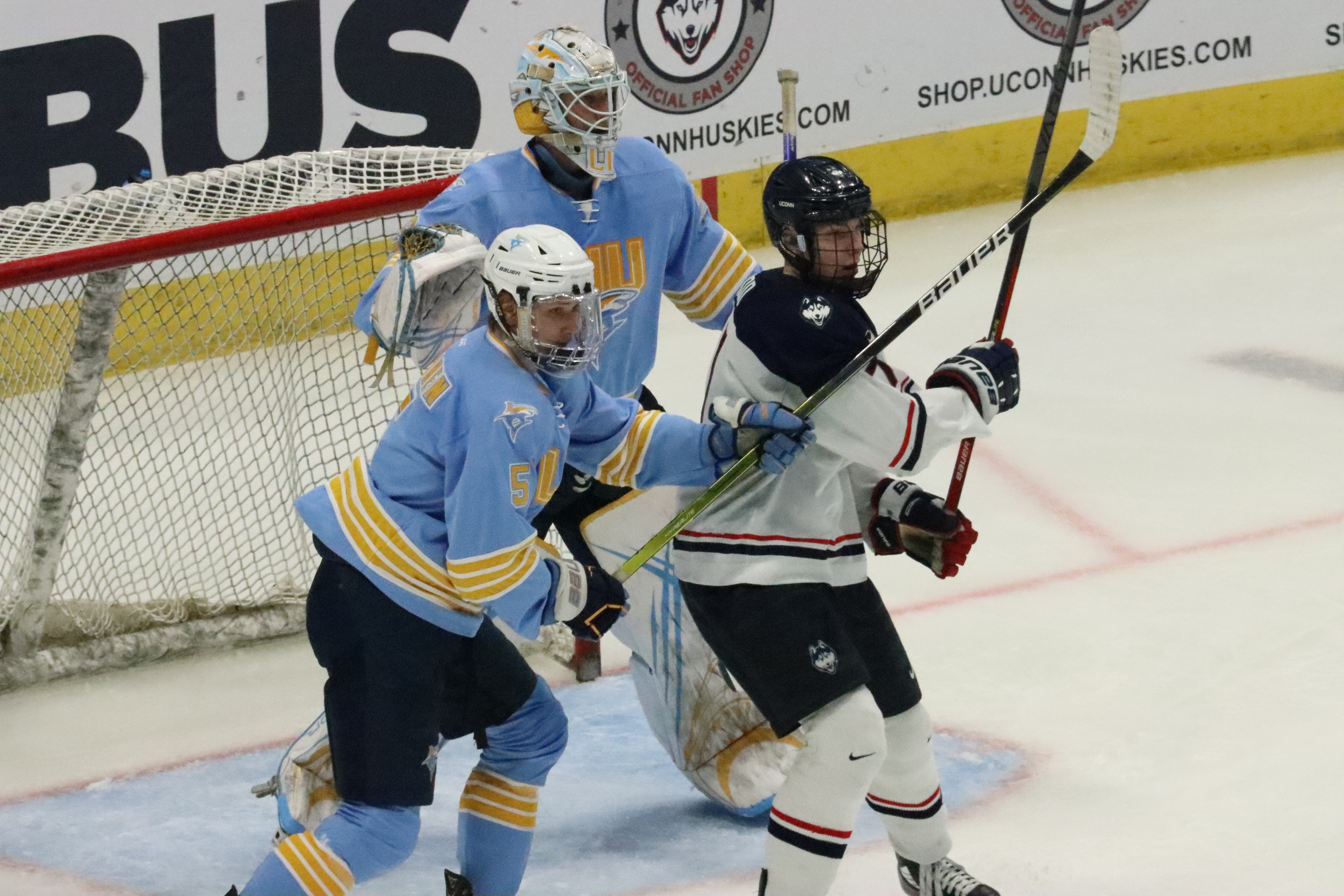 HARTFORD, CT- The UConn Huskies Men’s Ice Hockey team closed out their 2022 portion of the schedule with a 5-3 victory against the LIU (Long Island University) Sharks on Saturday afternoon at the XL Center.

John Spitz opened up the scoring for the Huskies in the first period with 11:19 remaining.  Andrew Lucas made the pass to Spitz. Spitz would use the backhand that went past Sharks goaltender Vinnie Purpura to make it 1-0.

The Huskies would extend the lead to 2-0 when junior Ryan Tverberg made the pass to freshman Jake Percival. Percival would then find Samu Salminen. Salminen fired the shot from the right side of the net to make it 2-0 with 3:51 remaining in the first period.

Isiah Fox scored for the Sharks with 2:23 remaining in the first period to cut down the lead to 2-1. Josh Zary would receive the lone assist.

The Sharks would cut into the lead as Anthony Vincent scored for LIU with 13:36 remaining in regulation to cut the lead down to 3-2. Patriks Marcinkevis and Cade Mason would receive the assists.

Matthew Wood extended the lead for the Huskies once again. Andrew Lucas would make the pass to Wood. Wood fired the shot and scored to make it 4-2 with 10:46 remaining in regulation. Hudson Schandor received the secondary assist.

The Sharks would not go away quietly as Austin scored with 5:52 remaining to cut the lead down to 4-3.

Justin Pearson would score the final goal of the game for the Huskies as he went on a breakaway and score the goal on the glove to make it 5-3 with 2:18 remaining in regulation.

Huskies goaltender Logan Terness made 35 saves in the win for his team. His record is now 7-3-2.  The Huskies’ overall record this season is 13-5-3.

The next game for the UConn Huskies will be at Fenway Park in Boston as part of the Hockey East Frozen Fenway Doubleheader when they will take on the Northeastern Huskies. The puck drop will be at 2:30 p.m.

The next home game for the Huskies will be on Saturday, January 14 against the Northeastern Huskies at the new Toscano Family Ice Forum in Storrs.  The game will begin at 7:35 p.m.

The next game for the Long Island University Sharks will be on Friday, January 13 against Princeton.