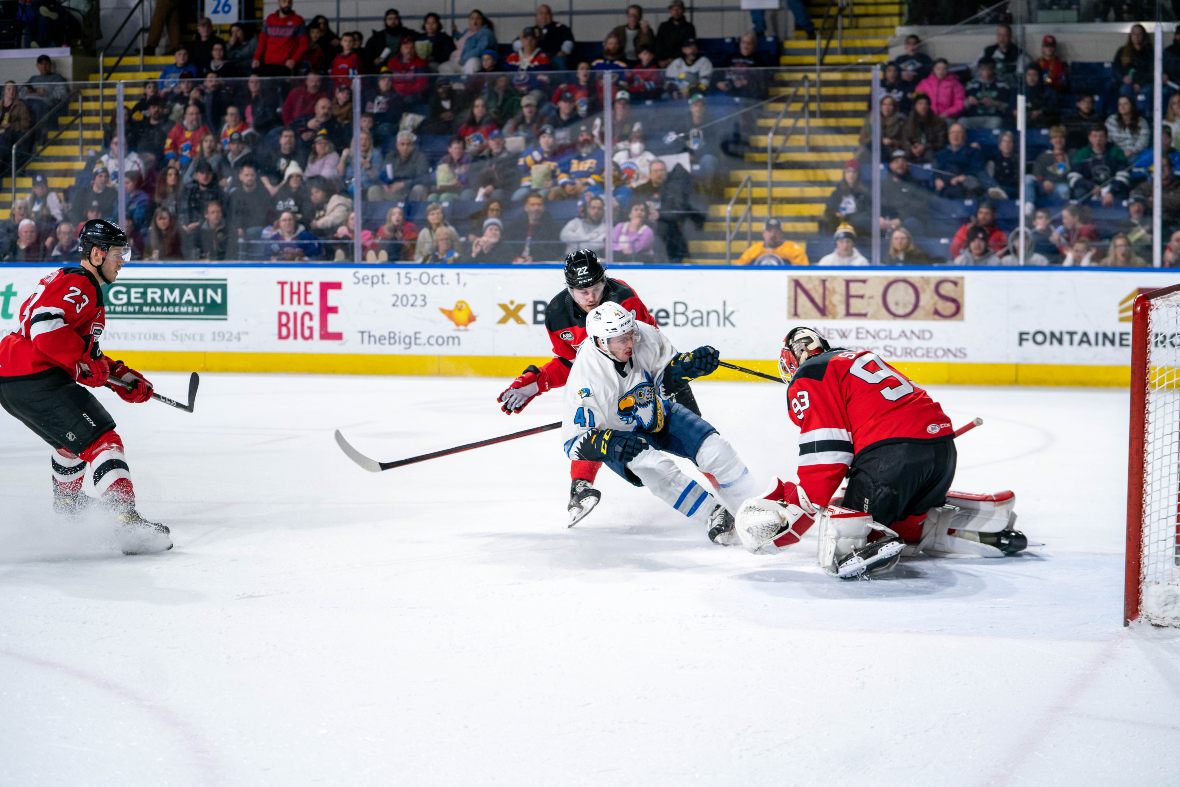 SPRINGFIELD, MA- Utica Comets goaltender Akira Schmid made 38 saves as they defeated the Springfield Thunderbirds 2-1 on Saturday night at the MassMutual Center.

” It was a real team effort. We had four lines. We needed everyone going. They played hard and we played well. Obviously, Springfield has been playing very well lately. We knew we would have our hands full. They got their chances. Obviously, our goaltending was very good.” Utica Comets Head Coach Kevin Dinnen Said

The T-Birds would register the first four out of five shots in the opening period.  Hugh McGing had a breakaway opportunity for the Thunderbirds but was denied the scoring opportunity.

Former Thunderbirds Nolan Stevens got the Comets on the board in the opening period as he went on the give-and-go rush to make it 1-0 with 9:40 remaining in the first period.

Steven Jandric tied the game for the Thunderbirds as beat Schmid stick side to score for the second game in a row to even the score at 1-1 with 7:26 remaining in the second period.

Nick Hutchinson would end up scoring the game-winning goal for the Comets late in the second period as Thunderbirds goaltender Vadim Zherenko denied the first stop on the scoring opportunity but Hutchinson was able to tip the puck in to make it 2-1.

The Comets continued their winning streak sweeping the 3-in-3 weekend with a win against the Providence Bruins on Sunday in Providence.

The Thunderbirds will take to the road this weekend as they will take on the Hershey Bears on Friday and Saturday in Hershey. The game on both nights will begin at 7:00 p.m. The T-Birds will return to action against the Bridgeport Islanders this upcoming Monday at the Thunderdome at the MassMutual Center.  The game will begin at 3:05 p.m.