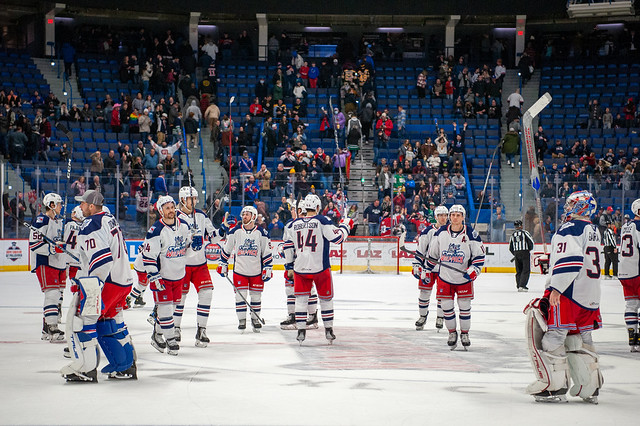 HARTFORD, CT-  The Hartford Wolf Pack made it three in a row on Saturday against the Providence Bruins with a 3-1 victory at the XL Center.

” Right now we’re trying to get as many wins as possible. I’ve been happy with our guys since December 1. I thought we’ve been playing really good hockey. We just have to state the course.” Wolf Pack Head Coach Kris Knoblauch Said

The Bruins got on the board with 13:51 remaining in the opening period as Jack Achan took the shot from the right-wing as Joona Koppanen deflected the shot into the net to make it 1-0.

Zac Jones would tie the game for the Wolf Pack. Jones tried the wraparound against Bruins goaltender Keith Kinkaid.  Jones would be able to put in the rebound to tie the game at 1-1 with 2:46 remaining in the first period.

Matt Rempe scored the game-winning goal for the Wolf Pack with 4:32 remaining in the second period to make it 2-1.

” He’s quite on a goal-scoring streak. Just bulldozes his way to the net. Scoring a lot of goals that way. I think moving him to center was definitely a good move for us and a good move for him. He’s contributed so much for our team.” Knoblauch continued

Will Cuylie scored an empty-net goal for the Wolf Pack with 1:06 remaining in regulation to make it 3-1.

” I think it can be hard for a goaltender. You look at your numbers with your wins and losses and think what your season would like to be. He’s a very motivated young player who is driven and wants to have success. I think he’s handled adversity very well. I think he’s come to the rink every day with a professional attitude.” Knoblauch Said

After giving up the first goal of the game, Garand was just focused.

” I always try to play that way. I think in the last couple of games. I haven’t played really well. Then tonight I wanted to get back to what works for me. Pretty focused on what I need to do.

Bruins goaltender Keith Kinkaid made 32 saves in the loss for the Bruins.

” He played really well. We had some Grade A chances. I am sure he’s very motivated to play against us.” Knoblauch Said

The Bruins won against the Wolf Pack on Sunday in Providence with a 3-2 overtime victory as Vinni Lettieri scored the game-winning goal for his 13th goal of the season.